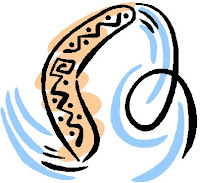 When I was in college I traveled with a singing group to the land down under, a huge continent surrounded by magnificent blue oceans. It was a new experience for me. Though we traveled primarily between Melbourne and Sydney, we had encounters with koalas and kangaroos. We ate meat pies with as much enthusiasm and frequency as fast-food hamburgers here in the States. And, we learned not to push back from the table exclaiming, “I’m stuffed.” To do so would have meant an admission of pregnancy. Probably not the best thing for us single women representing a Christian university.

Of course, the trip included picking up various souvenirs for family and friends. Collectible spoons, tea towels with the continent painted on it, and a few cheap pieces of jewelry embedded with small opals, a stone common to the country. But the most intriguing gifts were for my brothers: boomerangs.

Now boomerangs are interesting pieces of engineering. Usually carved of wood, the piece is designed to be thrown by and returned to the same individual. It’s a game that requires no friends if done properly. Never does a kid say to his pal, “Hey, want to play catch with my boomerang?” To do so may result in decapitation. To be honest, I’m not sure if they are toys or weapons. But I do know we had a tough time keeping those suckers from landing on the roof or getting stuck in the limbs of a tree. Once in a while, we watched as it twirled through the air and made the turn back to us. But rarely, if ever, did it return to our outstretched arm the same way it left.

Kids are like that, at least ours are. Caleb has already boomeranged. He left for college, came home, left to find work, came home, and has now left for the Navy. Not sure that he’s ever coming back. But in no instance did he return exactly as he left nor did he return to his starting position.

Then we have Seth. As we roll up Interstate 81 on the way to his graduation from a professional photography program, we wonder what kind of boomerang he’ll be. He sure had no intention of returning at all. But alas, his empty pockets have forced the arc that turns him back toward home. Will he be the same kid that left? Probably not. Will his journey to and fro be clear sailing or will he be detoured by obstacles in his way? I’m not taking bets.

This whole experience of parenting grown or nearly grown children is interesting, to say the least. We wish for them to make solid decisions and wonder why they can be so blind to the obvious. We let out the rope and hope they don’t hang themselves for that rope is impossible to reel back in. This is a process; a process each of us underwent to one degree or another. We survived. I guess they will too.
at June 03, 2010

"Boomerang". An interesting post and title. As I just read this post, I thought back to yesterdays and todays devotion from Pace Yourself. Both days concern ANTS. Many things come to my mind, but ants are hard working creatures, but they need direction (the scent). As I have said before, you and Gary have raised two fine Christian sons. Yea, they need some direction at times, so they boomerang back. They keep testing the waters until they get it right. One day they will be gone for good from living under your roof, but they will always need a little bit of direction and guidance from Mom and Dad. Have a wonderful weekend.

Thanks Rick. Very perceptive of you!

BTW- Those crazy ants are driving me nuts. There are tiny little ones that were crawling all over me in the car yesterday and even now in the hotel, there are even on my computer. I have no idea where they came from!!! I just keep smooshing them.