The mountainside, blanketed in white and tree boughs bending under the weight of the snow, was a beautiful site. Pristine and shimmering in the sunlight, the forest seemed content and serene. No blustery winds or below zero temperatures. Just a quiet stillness, a blissful rest before the rush of spring blooms and new birth. No visitors had come to this neck of the woods. No footprints interrupted the smooth and cold snowy surface. The mountain was alone in all it's resplendent, magnificent glory.

Alone, that is, until Liz and I arrived.  In the journey up that long, steep slope, we felt like intruders, interrupting a private respite. But still, we trudged on, a necessity if we were to arrive back at our waiting cars a dozen miles hence. Though breathing was labored and progress difficult, it was glorious to look up the trail and see nothing but snow. Feelings of accomplishment welled up at the thought that no other human had made the effort to come to this mountain. In that moment, we were Pike and Long, Fremont and Muir, Lewis and Clark.

Up and up we climbed through the snow piled high. We wondered if the mountain was playing a winter game, moving it's summit further away just to tease. We were not particularly humored by that. But we were humored by the small and consistent trail of divots made in the snow by an animal, perhaps a coyote or a bob cat. Though the snow made it tough to discern the path of the trail, the creature seemed to know. Around every turn and up the rocky way, the animal stayed the course. We needed only follow its footprints to travel the trail. 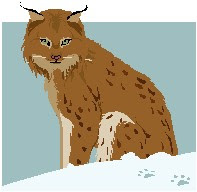 There were a couple of exceptions. When the trail curved distinctly to the left, the footprints went straight. "Perhaps we should follow Wiley Coyote," I offered. "He seems to know this mountain." But we didn't. Our course swung us wide and around several switch backs. As we finally turned back to the right, there he was again. Wiley took a much shorter path straight up the mountain, now intersecting with us again. Our path followed his until further up the  mountain. Another tight turn for us, a short cut for him. We were impressed. Had we the faith to follow his trail, our efforts could have been minimized.

Sometimes it's hard to discern the right course, to choose whose footprints to follow. Most of the time, it's a good idea to follow those who have gone ahead; those who have learned by experience and logged the miles. Other times, we do well to chart our own course and leave the comfort of the trodden trail. But never should we venture a step without crying out to God, "Direct my footsteps according to your word; let no sin rule over me" (Psalm 119:133)
at February 01, 2011

You continue to make me think. Your knack for finding God's guidance in everyday life continues to amaze me. Sounds like you and Liz had a wonderful run out in the mountains. The snow has been beautiful this year, but I have a feeling we will have a few more snowy runs.

Well thanks. We did have a great but tough run. I'm actually disappointed that we haven't had a really good snow here yet. There is always more in the mountains but down here...no snow has been more than a couple inches. I have to say I am a little jealous to be seeing the snow the midwest and north east are getting.