Leaves drifted down from balding branches. The sky, so blue, sent the breeze that captured those leaves in topsy-turvy currents. The late afternoon sun, a keen nod to the Indian summers I remember as a kid, stirred something inside me. I wanted nothing more than to run, jump, and play in the woods. And so I did, with my cross country runners by my side. We laughed and joked as we made our way along the forest paths that would be host to over two thousand pair of feet racing along come morning. This was the prelude to the MileStat Invitational near Richmond, VA. We came intending to run strong and had prepared well. But nothing in my long athletic career could have astounded me more. 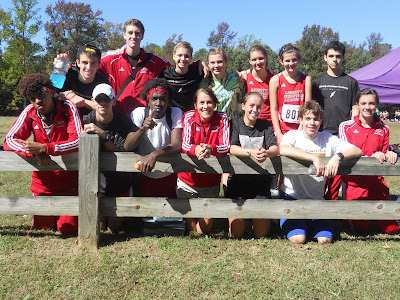 Our day started when the varsity girls took the line. Only three made the trip, the other girls falling to injuries and the call of the PSAT test. The gun sounded, sending the trio running toward their destiny. By the time they crossed the finish line of the 5K course, each of them ran straight into the record books. Abby posted  a time twenty-four seconds faster than ever before and collected a medal for a top-twenty finish. Close behind, Rebecca and Jami erased more than a minute from their prior bests. And that was only the start of a beautiful day.

The varsity guys set a blistering pace despite a tightly packed herd of 174 runners. Trey, my top runner, methodically weaved his way through the crowd, straining for the finish. He was the sixth man across the line, besting his time by a second. But not far behind, his teammates wrote their personal histories one by one. Ike stopped the clock fifteen seconds up. William, with a finishing kick kin to rocket boosters, paced himself past other contenders in the last meters, claiming a personal record (PR) of nine seconds. Then came Regan, a senior who longed to break the allusive twenty minute mark. No longer illusive, he buried his PR to 19:17, a 1:14 improvement over his previous best. Elisha surprised everyone with a 1:07 PR followed by D'Nard's impressive fifty-four second PR. On Dnard's shoulder was Ryan, racing to a  twenty-four second record.

But the day was not done. Hannah and Kate had yet to race the JV 5K. Both in eighth grade, they pursued girls three to five years their senior. Off they went, racing across the field, around the bends, and into the wooded loop. Faster and faster they ran. Hannah's PR was 55 seconds, Kate's an incredible 1:29.

How is it that an even dozen runners all show up on the same day and run with the wind? I've never seen anything like it. They prepared. They focused. They did what some wrote on their hands: P.U.S.H. Pray until something happens.

P.U.S.H. they certainly did. What a day. Everyone of your runners certainly had their focus on target and their performances speak for themselves. I know you are so proud of them. Congratulations to you and to each of your runners.

Very proud. Now they get to run tired this week with two quad meets and hard practices. All necessary for the closing weeks.