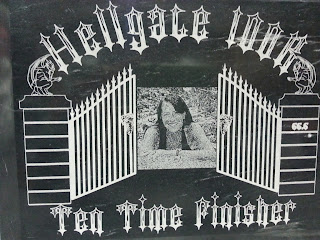 "Last verse, same as the first." In same ways, yes. My last race was the same as my first: I started. I finished. But in many ways, there's no comparison. It took ten finishes and 666 miles  of the devilish Hellgate 100K race to figure it out.

The brainchild of Dr. David Horton, the Hellgate 100k+ (actually 66.6 miles) always begins at one minute after midnight on the second Saturday of December. The race has garnered a near cult-following, many hopeful entrants turned away. Those rewarded a cherished spot must earn Horton's approval as a worthy candidate. It is he who judges an applicant's toughness and ability to cover the rocky, mountainous real estate between the start and finish lines. But even so, the chosen few are never guaranteed a finish. What they are promised is a night and a day of unpredictable weather, trail conditions, and a barrage of self-doubt somewhere along the forest path.

I was forty-five when I sold my soul to the trail devils. Now, at fifty-six, I know them all by name. Cold, Dark, and Windy are three of the brothers. Then there is Roaring River, Icy Boulders, Slippery Slopes, and Hidden Rocks. That last one is the son of Leaves-a-Plenty, who is assigned the task of hiding ankle-wrenching rocks from view. But the family is large. Snow and Sleet are the cold-blooded cousins of Pouring Rain. Long Climb and Never-Ending taunt each runner with alternating messages of "You can do this. No you can't." But this year, the real fiend was Sleepy, a close relative to Dopey and Nod-off-again.

I came into this race greatly under-trained, confidence waning. I even wrote about it beforehand, hoping to conjure up the courage and resolve to take on the devilish imps along the trail. I knew what the race held and, for mere mortals such as myself, the cut-offs would not be my friends. But still, I felt compelled to out run the Devil himself if necessary. Though the race T quipped "We don't HAVE to run Hellgate. We GET to run Hellgate," I had no choice. I HAD to do it. My tenth finish was in sight and it was this year or never. I failed the finish once. I could not fail again.

Though I've had trouble staying awake before, little did I know that the evil sleep devils would find me so soon--and so often--once the host of runners took off into the night. It was not long after the knee-deep stream crossing that the need for zzzzzzzzz's hit. Counting steps occupied my mind and held them at bay. But the higher and longer I climbed, the more weeble-woobley I became as my eyelids closed off the environment around me.

Grateful to finally gain the gap at Petite's, I woke to a rocky downhill, grateful to be feeling the ground under my feet. I felt alive and free. As long as I ran, the darts thrown by the Sleepy devil missed the mark. I was alert to the sleet falling around me, the flow of the trail, and the slight breeze coming through naked limbs. But alas, a descent and trail section gave way to another long uphill. The darts once again found their mark.

All night I fought off sleep, albeit not very successfully. Even the landscape now white from sleet-turned snow could not hold my attention. Though hard to explain, the desire to curl up in a little slumbering ball was overwhelming. I fought with all my might to stay upright, singing, shouting, slapping myself, asking myself questions. But before I could answer, I would fall into another micro-sleep, oddly aware of only my slowed pace and weaving steps.


I ate, drank, took caffeine, and pulled out every trick in my ultra bag. It was hard to imagine how I could possibly finish the race if I could never wake up. Relieved to hit the first cutoff  ahead of time, I chatted with another runner up the next hill, managing to stay coherent. Through the darkened woods I ran, encouraged by legs that responded to the task.

Dawn was breaking by the next aid station. After refueling, the task was to climb another mountain road. Surely, eating, drinking, and talking to people should revive me. But like clockwork, that (and every extended climb up through fifty-two miles) brought on more sleep-hiking. My brain screamed "Noooooooo!" but my head shut down. This was going to be tough.

Miraculously, and despite snow, sleet, freezing rain, and a soaking wet rain, the padding on the cut-off time increased. I knew I could finish if I kept on moving. I knew I HAD to finish. The finish was demanded by not only my desire to bag number ten but by the story I could tell my team. The thought of admitting defeat to these young people was unconscionable. What would an unnecessary failure tell them about suffering, perseverance, and enduring unfortunate circumstances? I needed to walk into Monday's practice so I could testify that success is achieved by overcoming one obstacle at a time, even if that obstacle is the next faltering step. 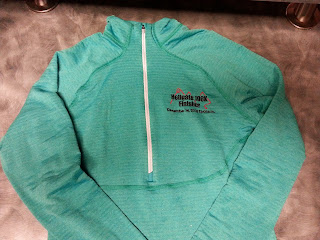 I did okay. I ran across the painted line on the grass, delighted to see my husband standing there to greet me. Crossing that orange mark removed the huge burden of this particular finish. Sure, I was tired of running and weary of breathing. My time was not speedy but it was not my worst. My legs were okay, nothing was really wrong, and a hot shower was imminent. Relieved, the realization of completing the task began to sink in. My string of Hellgates had come to an end.

Many have told me I'll be back next year. No, I don't think so. Really. I am content to give my slot to another runner who wants to outwit and outlast the woodland devils. However, might I consider a do-over in four years when I am sixty? Hum...maybe.

Very cool post. 10 finishes?!? Impressive. I only just found out about the ultra scene last year. With a year of the LUS under my belt, the Beast is calling. Thanks for the extra incentive.

Hi Troy- Just remember, The BEAST is friends with all the Hellgate demons. Can make for some interesting hours in the woods. :)

Rebekah I will bookmark this post to read next year as I attempt my first Hellgate and also part of the ugly Beast. Amazing accomplishment finishing 10 hellgates. You are a one tough women! Happy Holidays

Siobhan -There are plenty of times when I don't feel tough. But I suppose that if I just keep going, I can fool a lot of people into thinking that I am. :)

Thanks for reading! Come back soon.