Face the fear with rock-solid preparation 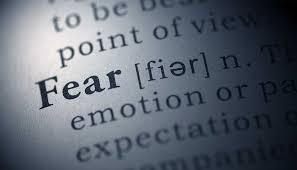 Fear is an emotion that triggers a staggering series of events. Upon first sign of trouble, a tiny organ in the brain, the amygala, begins to shout out audibles, as screeching sirens blare out warnings. The heart pounds, blood pressure sky rockets, breathing quickens, and stress hormones stream out from their hiding spots. Blood shunts to the extremities to enable flight and the cerebral cortex, the center for reason and judgment, puts out the "gone fish'n" sign. In both acute and chronic situations, poor decisions are easily made.

Granted, these responses to fear can come in handy. A guy jumps from behind a bush to attack, and you set a new world sprint record. Or, you come across an upside-down car, righting all of it's 2000 pound mangled frame in an effort to free its passenger. Fear can drive unexpected performance. But, fear can also destroy in a much more sinister way.

We talk a lot about fear in athletics; fear of failure, fear of not being good enough, fear stemming from the past, and fear contemplating the future. Fear sometimes comes into play by what we have done. Other times we fear because of what we have not done. It's possible fear can help us see more clearly, like when we get caught doing something stupid and we panic anticipating the consequences. We are awakened to our own idiocy, much like getting slapped up side of the head. But more times than not, residing fear, in particular, clouds judgement because of loss of perspective. We fret "what ifs" and become mired in potentialities. The result? We go no where fast, paralyzed to take the next step, fearful of the leap to new levels, intimidated by others, and held in place because our tongues are stuck to the frozen pole of unhealthy comparisons. I don't think it has to be this way. 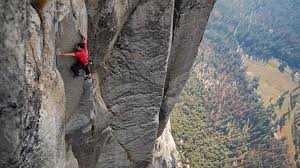 I came across a fascinating TED Talk the other day. Alex Honnold opens the speech by showing a video clip of him climbing El Capitan in Yosemite Park, CA. He is wedged into a narrow split in the vertical wall. He can be seen reaching into his chalk bag to cover his hands in the white powder. But what is not seen is a rope, because there is no rope. 2500 dizzying feet below him is the ground. 500 feet above, the top of this humongous slab of granite. All that holds him to the wall are his well-placed hands and feet. There is neither place nor means to cut the climb short or take a do-over. He is alone. Just him and the wall. One wrong move equaled sure death. I felt my own breathing quicken as I imagined being in his spot. How in the world did he not let fear rule the day?


As I watched his story unfold, I heard him tell of his harrowing solo free climb of equally iconic Half
Dome. At a particularly difficult spot, panic set in. He had doubt whether he could perform the next move necessary to propel him further upward. He had climbed the wall two days prior but with a rope for safety's sake. But now, with the  knowledge that mis-playing that critical move would result in death, he had no recourse but to go for it. He did, and he lived to tell of the successful climb. Still, Honnold spoke of a dissatisfaction even with the accomplishment. He yearned to be a great climber, not a lucky one. 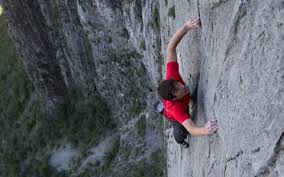 Though he did not free solo for the next two years, he spent seven dreaming about a free solo of El Cap, a 3000-foot wall most people take days to climb while harnessed into a sophisticated rope system. Then for two years he relentlessly prepared. He spent days on end rappelling off the top on a 1000 foot rope, inspecting every potential hand and foot hold and memorizing the thousands of moves that would be necessary. He felt the texture of the rock, visualizing his mindset as he anticipated the epic and ropeless future climb. From the bottom, he rope-climbed with an empty backpack, collecting loose rocks that cluttered many of the cracks. For a full year, he specifically stretched knowing he needed to have optimal flexibility to make the same kind of move he had experienced on Half Dome. Honnold says it was imperative that he "consider every possibility" to eliminate any room for doubt to creep in, because doubt is the precursor of fear. He was meticulous in preparation for his "choreographed dance" up the sheer face of the wall. He was ridiculously faithful in controlling the controllables, and in doing so, fear was conquered as well as that wall. In "achieving mastery" with relentless pursuit of excellence, fear was not even a factor. 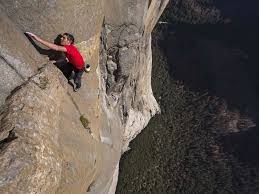 The Liberty volleyball team left today for the conference tournament. The women on the basketball team play their first game this evening. The swimmers and divers have a weekend meet in their sites. I wonder if they are ready to face fear head on. Will there be fear in serving what could be the last point of the match? Will a player on the free-throw line be thinking about missing? Will the diver play it safe on the take-off out of fear of over-rotating and creating an embarrassing amount of splash? If they prepared well, fear should not win. If they did not prepare well, all bets are off.

What strikes me profoundly is the fact that fastidious preparation is the most significant deterrent to fear. Sure, there will be some nervousness because nothing is ever guaranteed. But fear? Not if we consider every possibility and leave no room for doubt to creep in. The process is not easy, but it is worth it, even if your life does not actually depend on it.