OK. I did it. I said "yes" to being the distance coach for indoor track just when I was eagerly anticipating free afternoons at the conclusion of the cross country season. But alas, I could not turn down the kids' pleas.

We started practice a few days ago. At least fifty kids showed up in the classroom for the first meeting. There was standing room only. I knew the cross country kids but everyone else was a stranger. The head coach addressed the anxious athletes, laying out the rigors and rules for the season. Then he dropped the bomb. "We will be having time trials on Thursday. You'll have to run the minimum times to make the team." 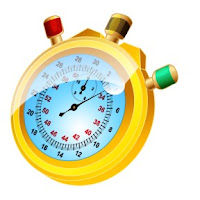 This was the first time he had decided to take this approach. In other years, all-comers were welcomed. But not now. With  dwindling access to the indoor track and sprinters who don't fancy running out in the elements, he decided that stampeding the hallways of the school in large herds was not a good idea. Hence, the tryouts.

I understand but have mixed feelings about it. I look at some of my cross country kids who have hearts of lions but lack the predator's power and the speed. These kids will do anything you tell them-and with a smile-but they won't get to the finish line first. They are great team members, encouraging and supporting without hesitation or jealousy of those who are swifter. Their improvement from the first of the season to the end is measured in minutes, not seconds. Anyone of them could have been awarded the "Coach's Award" for admirable traits. But alas, now they must face the click of the stopwatch. I wonder how they will fare.

None of us like to fail by missing the mark-or see those we care about do the same. It is a painful process. But we do know that it's a part of life. Not everyone who runs wins the victor's crown. Still, my guess is that some of these kids, cross country cross-overs along with others, will not make the standard. How can I help them through this process without coddling or patronizing?

There are a bazillion quotes about failure, some of them quite poignant, others cliche'. Try these:
Enough of that.

But I was interested to read what Job, the persecuted and tried man of old, thought about failure. Here he was, an illustration, and flannelgraph object lesson even, used by God. His possessions, family, houses, status in life; all taken from him. The only thing left intact was his ability to take in sustaining breaths and that was not without difficulty. Did he feel like a failure? Yes. Was the process heart-wrenching and painful? Yes. Did all these maladies make him "feel" good?  No. And again I scream, "NO!" It was horrible, terrifying, numbing. And yet the man never cursed God. He took what came his way and despite the misery of it, reveled in God's sustaining mercy. He came out on the other side of the adversity as a man standing tall.

So to all those who momentarily know the pain of failing-or fear that possibility-take heart. At least there is hope for a tree: If it is cut down, it will sprout again, and its new shoots will not fail. (Job 14:7)
at December 02, 2010

I pray for speed and understanding by your cross country kids. Life is full of tough times and hardships, but what we have gone through is nothing like what Job suffered through!

Leaving now. I sure hope these kids can pull it off today!

How did they do?

Well, most ran splendid times but there were a number of kids (3 of them "my" cross country kids) that did not run the standard. I am quite sad for them.

Very encouraging words here.
I am enjoying your blog, thank you for your words.