A week ago this time, I was half-way through the Promise Land 50K, striding along forested trails, and along creeks running more swiftly than me. The misty, damp conditions, bright green tunnels of foliage, and the sweet siren songs of the birds produced a level of tranquility not often experienced in this fast-paced world. I embraced being there. I eagerly accepted the challenges. But I could not help but remember that this race was in reality a box needing to be checked off.

Today, I am sitting on my bed with six inches of stitches and staples in my face, along with a swollen jaw line. Some may even mistake me to be Herman Munster's second cousin. I've been told the importance of laying-low, doing nothing, in order to guarantee an acceptable aesthetic result. And all this because of a little bump.

When I nonchalantly asked my family physician about a round, hard lump along my jawline back in January, she waved it off as nothing but a cyst. Still, in the interest of safety, she sent me for an ultrasound. The ultrasound led to a biopsy, and the biopsy led to a surgeon search. All this took time and a fair bit of mental gymnastics playing out the possible scenarios in my head. In the meantime, a routine mammogram came up suspicious and resulted in more tests, waiting, and contemplations. It was an interesting couple of months.

Now life's landscape looks a little different. The breast issue became a non-issue once the testing was complete. The biopsy proved the parotid tumor to be benign, though surgery was indicated. And the surgeon selection process could not have yielded a better practitioner. All this commotion for a little bump or two.

Arriving at the hospital for my long-awaited surgery on Wednesday morning, Gary and I both admitted to being a little nervous. It didn't hit until I was on the stretcher ready to be taken to the OR. There were possible complications to the surgery that could be life-altering--not really life-threatening--just altering. Still, in an odd way, it was wonderful to see so many doctors and nurses that I had worked with for years. "Hey, how are you? What's been going on in your life?" was a common thread in both directions. To experience what it feels like to be wheeled down the hallway on a stretcher or sit in pre-op holding watching patients, doctors, and nurses come and go was fascinating- almost fun.

Then it was my turn. The wall plate that opened the doors into the surgical hallway, one I had pushed thousands of times when working there as a perfusionist, was slapped. The doors responded, opening up wide like a big, sleepy yawn. OR 3 was not far down the front hall, and I was greeted by nurses smiling behind their masks. "Stop, I need a mask! I can't enter a room that's set up without one," I wanted to scream. But wait. That's not right. Patients don't need masks. Yes, I'm a patient. I guess we are allowed to have our germs flying around in our own surgical suite. I reset my thinking from clinician to patient.

Things moved more quickly than anticipated. I scooted to the surgical table while chit-chatting, the stretcher was pulled away, EKG pads placed, and head and shoulders positioned. "Your heart rate is in the high 40's," stated the anesthesiologist. "Is that about right?" He knew I was a runner but wanted to confirm I wasn't bradycardic for no good reason. 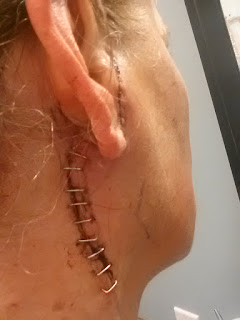 Hum. I was surprised my heart rate was that low with all this excitement. But at the same time I was pleased, hoping it indicated some level of fitness. With nary another word or warning, a mask was placed over my nose and mouth to pre-oxygenate before intubation. Since my anesthesia would be 100% IV narcotics rather than inhalation agents, I knew I would not get sleepy breathing through the mask. But when I heard, "OK. Let's go," I knew it would not be long. My eyes fixed on the overhead lights. I wanted to see how long I could fight the drugs coursing through my veins. It was like a competition. Not much happened in the next few seconds. Ah-ha. I was winning. Then my slightly fuzzy brain heard, ""For her, wham, bam, push it fast." OK. I give. Goodnight. My eyes closed, just like in the movies, rendering the next 3.5 hours time forever erased from my memory. I wish the procedure could have been recorded. I would have liked to see the whole thing.

I woke up in recovery hours later, feeling like one of those dolls whose eyes roll open and then easily close. YEAH! Immediately, I knew my face had survived; no paralysis of the facial nerve. Whew. That would be tough to be a speaker with a mouth and eye that would not close. I was in no real pain but when asked if I wanted something, I agreed in order to stay in front of it. No nausea. No paralysis. No pain. Life was good.

The rest of the day was spent in the Surgicare Center. It took a long time for the effects of the IV drugs to let go. Abby and Kendal, two of my faithful Shindigglers (and senior nursing students) came to visit. It was fun to watch them watch the monitors and access me as a patient and not just their TrailMama.

Now that I'm home, the "big bump in the road" caused by a little bump beneath my jaw doesn't seem like such a big bump after all. The process has been relatively easy, pain minimal (despite the Frankenstein-like appearance), and quite interesting to me from a medical viewpoint. I am thankful for that. 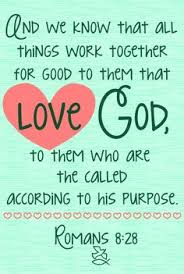 Is there a lesson in this? Probably. Though to be honest, I'm not feeling very philosophical at the moment. But this I know: If God is truly sovereign, we need to be willing to roll with whatever He ordains for us; look at each bump, twist, and turn as an adventure and life experience that will ultimately be used for good. Are some bumps bigger and harder to deal with? Sure. I think the hardest part of this bump is having to lay low for a week or two, hardly of any significance in the big picture.

Now, I am not minimizing the difficulty of mind-boggling, exceptional, and terrifying situations. But
I want to encourage any and all who are facing a bump to do so knowing that nothing is without purpose. Everything is written into our life stories for a reason. Find that reason in Christ.
at May 07, 2016