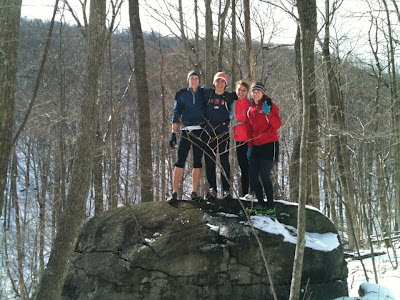 We had a little snow last night and the superintendent at LCA made good on his promise. He cancelled school at the sign of the first flake. It wasn’t long until one of my runners called to see if we could run in the big mountains. YES! There were five of us and though there was little to no snow down low, we got into some knee deep stuff up high. So glad to have adventurous high-schoolers! Go team.

Knowing it was the first day to have middle-schoolers join track, it was prudent to run a little beforehand since I would have the youngsters to deal with during practice. I hit some local trails and gave the new kids a little test run during practice. All I can say is that middle schoolers must come from Mars.

It was a warm and windy day, sun shining: a day where the woods calls out to you. I texted a friend and we met so that I could show her some trails new to her. We ran about eight miles before I went to track practice and led the new middle-schoolers through a short run before team pictures.

With a trail day planned for the my team, I ran the required course the older kids would be tackling before practice. I have this habit of thinking they can do a little more in the allotted time. When I finished, I headed down to practice, sent the older ones on the way and headed to the hills with the youngsters. We put in about three miles and they did much better than expected. They even got to witness my total wipeout when running downhill and crashing into a tree doing a belly slide. Oh well, things happen when you run trails.

With no official practice today (yeah!), all I had to do was open my door and step outside into the windy weather. A familiar loop was par for the course. The headwind made me feel puny but the tailwind. . .well, I’ll take that any day.

It was going to be a busy Saturday, full of hard, manual labor. My chipper was calling me to make mulch out of piles of branches just waiting to be shred to itsy-bitsy bits. Then, I had to dig about 14 post holes for a raised bed I am building. From past experience, I knew I wouldn’t be able to walk after a good eight hours of work. Therefore, I made sure to get in a couple miles before the work started. I was pleasantly surprised that I felt better than I have in a long time.

I had another good run today. One of my medical issues is a fairly severe microcytic hypochromic anemia. Interpretation: I have too few red blood cells and the ones I have are shriveled and tiny, making it hard to transport sufficient levels of oxygen. (They must be empathetic to the looks of the cellulite on my legs.) The anemia panel suggest that this is primarily due to an iron insufficiency. It takes 2-3 weeks for the iron to start increasing RBC production. Perhaps I am beginning to benefit from increasing hemoglobin levels. I’ll take it, regardless. There are still other issues to sort out but at least one thing is getting better.