Crooked is as crooked does 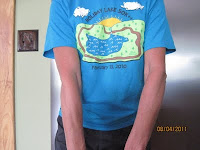 Some things are meant to be crooked; a branch on a bonsai tree, a garden maze created by a drunken horticulturalist, or a nose impacted repeatedly with a boxing glove. But a perfectly normal, run-of-the mill arm... I don't think so.

It was all going so well. Running along a rocky ridge line with two of my XC team members, the valley's river below and the peaks we had yet to climb drew us further along the trail. It was new territory for them, some of it very technical and rock strewn. The pace was reasonable for the climbing heat and oppressive humidity. Happy chatter filled the spaces between each footfall. Then, approaching our final turn off the mountain, time slowed as I felt my body hurl through the muggy air. I was horizontal. For a nanosecond, I was Superwoman, outstretched and flying. But then, gravity announced itself.

I quickly descended to meet the ground rising up to me at an alarming rate. Prematurely wincing, I braced for the landing. Ahhhhh. This is gonna hurt. I was right. It did. A lot. My full body weight came down on the extended left arm, my forearm shoved up into my elbow. As my Mother says, "it knocked the stuffin's out of me." Breath was hard to catch and upon sitting, the trees started spinning as my stomach churned. The girls weren't sure what to do. Neither was I.

They pulled me to my feet, me grasping my arm. Now covered in dirt and grime with sweat creating tiny mud rivulets on my leg, I was a mess. My arm loudly protested at the assault but at least no bones poked through. So, off we ran, if somewhat tentatively, toward our awaiting car.

It was only later I realized my anatomy had been significantly rearranged. No amount of trying could push my arm straight or bend it further than 90 degrees. I could not touch my face, bring food to my lips, or reach up to deal with my ratted ponytail. What's a girl to do?

Ice. X-rays. Adaptation. The report said no fracture but my arm is still crooked. Torn ligaments, most likely. So for now, crooked is ok because it will make me appreciate straight all the more.

I'm sorry to hear about your arm. At least it was an arm and not a leg!

Certainly not what I expected (or wanted) to hear about on a Monday morning post. I pray you and your crookend arm heal quickly, but until then be sure to not tackle any big construction projects. I will be thinking about you.

Yes...better an arm than a leg. The good thing is that hurts the least when in a running position. Glory day! :)

Rebekah this is whay I am afraid to run on trails! prayin' you're arm will starighten out soon.

Well...it could have happened tripping over the curb as well. :)

Thanks for your wellwishes It seems to be getting a little better.