Run for the memories

"Look at that huge cemetery," Dad exclaimed, trying hard to keep the corners of his mouth from upturning. "I wonder how many people are dead in there?" He had hope eternal of coaxing an answer out of one of us kids as we tooled along in our wood-sided station wagon. But before we could utter a word, his glee could not be contained. "All of them!" he blurted as he threw back his head and laughed at his own wit. 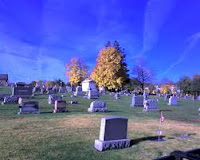 Now I stand in front of my father's grave, a polished granite slab where "Only a sinner saved by grace" is etched. Usually I cry when I visit. But on this run though my hometown, I delight in the memory of Dad's cemetery joke told way more than once. But, that was then. This is now. I clean off some bird poo from the top of the stone, softly utter "I love you," and continue along quiet village streets.

The boroughs of Sellersville and Perkasie, PA are connected by a meandering path along the Lake Lenape creek. I run the familiar ground, crossing concrete dams and wooden bridges, passing ball fields and a turtle family of six sunning themselves on a rock.

Up a steep, rutted, and rooty trail, my steps take me to the fence of Menlo pool, my location of choice during childhood summer months. The pool I knew was large and deep, with one and three meter spring boards and a blue fiberglass slide standing tall along one edge.

Now, a new pool filled with crystal clear water awaits the summer crowd. Gone is the high dive. Two low spring broads offer more bounce for the ounce, a large fabric contraption preventing a spinning, out-of-control diver from colliding with the pool's edge. A large tube slide with wide and safe stairs offers more fun. But that's just the competition pool. A gigantic splash park complete with spiraling waterslide and lazy river replaces the small kiddie pool of yesteryear. A late summer membership sale is in progress. That was then. This is now.

I sight-see through "Old Towne." Seltzers store no longer houses the team swimsuits or the required stretch gym suits, striped, one-piece numbers that made us look like a bunch of inmates. Instead, a nail spa. Leshers Five and Dime, with it's squeaky wooden floor boards and two levels of shopping pleasure no longer stands. A fire consumed it and all of its cut-glass butter dishes, mouse traps, and penny-candies. Saturday morning farmer market stands fill the void. That was then. This is now.

Ah. There stands my elementary school on 7th Street. I'm surprised. Though renamed, it looks the same on the outside except for some construction equipment in the parking area where I chased (and caught) all the boys. At the end of one wing, the classroom windows are open. I pop my head into Mr. Hutchison's 6th grade classroom. I spent a year with that wonderful man. Same closets and layout. The sink was being removed and the blackboards have been replaced by whiteboards. It is being renovated. Still, it seemed very familiar--until I ran around the corner. There, a huge two story wing buried our kickball field. That was then. This is now.

The high school. Where did the high school go? Between the "new" school building under construction in 1975 (my graduation year), and the junior high building, now a middle school, "my" high school building has vanished. Gone is the circular choir room and the old gymnasium. Not a single brick of the old school with it's casement windows propped open to allow a cooling breeze remains. A blacktop parking lot reflects only heat waves. That was then. This is now. 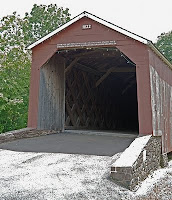 It's getting hot and I'm getting tired but there is more to my self-guided tour. I approach Moods covered bridge, built in 1874 to span Perkiomen Creek and destroyed by arson flames in 2004. The replica retains the same form but only northbound traffic can pass under it's heavy wooden beams. I once traveled through the historic span daily in both directions. But, that was then and this is now.

There sits the Dairy Queen, still the only "fast food" in town. The walk-up stand has been there as long as I can remember. "Any mess-ups?" was the common query when we were kids. If you were lucky, the "Dairy Fairies" would make the wrong kind of sundae right before you pedaled up on your 3-speed bike with coaster brakes. Then, it was yours for the taking; free. Nothing is free anymore. That was then. The not-yet-open serving windows is now.

I cut a corner across a parking lot and into a neighborhood. Neither were here back when. Now, instead of acres and acres of woods that my Dad always wished he would have bought, are many homes with now-matured yards. But around the corner I turn, not even recognizing the corner of Hillcrest and South Main. The only home I knew doesn't look so grand anymore. Instead of sitting atop a small hill in the midst of a well-manicured three-acre lot, a new house stands in the place of three giant pine trees in my front yard. The other front corner, full of weeds and mounds of dirt, sits vacant. The builder, who purchased our sub-divided lot, lets a bulldozer rest and rust. The backyard of our house is fenced and the flower beds sad and barren. Only the green painted shutters give a wink to the past. That was then. This is now.

I cannot fling open the back door, savoring the aroma that filled that kitchen. I cannot shoot baskets through a hoop that is no longer bolted to the garage. I cannot climb the weeping willow whose strong branches used to console me. I can only remember the playtimes in that basement, the wild dashes to the school bus, the smell of freshly grass in the summer, and hoping the snow silhouetted against the street light would earn a day off from school in frigid February. I hear laughter and joy and envision my mother, father, brothers and friends within those stucco walls. But, that was then and this is now.

I turn into the retirement community a mile or so away, entering the carpeted, quiet hallways. Up the elevator to the fourth floor and through door 476. It's not the back door; it's the only door. But my Mother is there and it's okay. That was then. This is now.

Thank you for sharing your memories. I know they are all so special. I know you do not live in your hometown, but I do. Even though I have lived in my hometown all of my life, your writing helped wonderful memories come into mind. Thank you so very much.

Lucky you...Do you ever just go explore the old sites just for grins?

You don't know the half of it. Many runs contain those old sites. We have historical running tours, we run through yards and old short cuts I use to take as a kid. We might go on a blackberry tour where I use to pick blackberrys and which are now roads and interstates. Remind me to tell you about the "Cheese Shop". All great memories from the past. Memories are all so special.

That is very, very cool. :) Just don;t get chased by some neighborhood dog as you cut the corners.