A few days ago, runners Eric Grossman, Troy Shellhamer, and Anne Lundblad finished the Tour de Virginia in Harpers Ferry, all 568 miles of it. None of the three found it easy. All suffered a lot, especially in the closing days. But they finished and must be congratulated for this tremendous undertaking.

I'm glad they finished on several levels. First, they are my friends and friends want friends to be successful. They worked hard, put in the time and miles, suffered like they had never suffered before, and arrived at the finish line. Cudos to them. Well done.

But secondly, I'm glad they finished so I can stop thinking about it and move on. Rob French concurs. Rob developed Achilles problems and pulled from the race the day after I left. He called me on Day 14 to commiserate. We have both had a good dose of quitters remorse and wish to put the Tour behind us but in perspective. Hence, I offer my last thoughts on the matter.

Gary picked me up on the morning of Stage 6 and brought me home. I quickly sorted wash and began the arduous work of putting away all my gear. I didn't want to be reminded of my failure, although at that point, I actually didn't feel too bad about dropping. Besides, I had work to do in preparation of the gang overnighting at my house.

On the day of Stage 7, I got up early and started working: cleaning house, preparing bedrooms, and cooking and baking. My feet swelled from standing all day, looking like swollen gourds. But it was worth it. By the time the runners arrived, barbeque grilled chicken, baked beans, homemade bread, salad, strawberry pretzel squares, apple crisp and ice cream, and a chocolate fudge torte awaited them. I enjoyed being able to give James and Adam a day or two off from having to cook. And, I think they all enjoyed sitting at a table in air conditioning after a dip in the pool and a cleansing hot shower. It was their first taste of normalcy in over a week, capping the day with a sleep in a bed.

Come morning, the runners left a little later than normal, a change not welcomed by Anne who was used to getting an early start. I put dinner in the crock pot and left shortly thereafter, having committed to crewing for the day. This relieved them of their dependence of springs for water. Unfortunately, I got to the first check point about five minutes behind the runners, finding out from a group of nurses out on on hiking outing, that Troy had fallen and ravaged his hand. In fact, the blood trail was still evident on the ground. Thankfully, they patched him up as best they could and sent him on the way. I gave chase, driving around Robin Hood's barn, to intersect with them at the next point.

I hiked in and waited, prepared with sodas, sweet tea, water, and a variety of snacks. Eric seemed surprised to see me. Techno TroyBoy approached, phone held to ear, chatting away. Anne was pleased to have a strawberry lemonade. I was just glad to assist.

Next stop was to check on Robin (Eric's wife) who was waiting five miles away before starting the trip home. The boys had come through and now she was waiting on Anne. I scurried off to the next spot, ThunderRidge overlook, although I was too late to catch the guys.

Nevertheless, at Petites Gap, both Eric and Troy arrived within minutes of each other, again grateful for being able to wash off, drink, eat, and refill their packs. Ten miles remained. I waited for Anne, expecting to soon see her ever-optomistic self. Wrong. As she approached, Anne sobbed. "I just fell again for the seventh time in eight days. I can't do this anymore. This will be my last stage. I'll finish the day but I am not starting tomorrow." 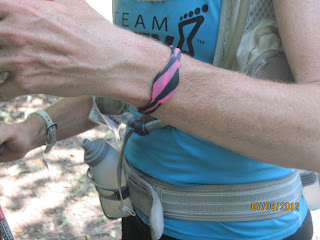 I was shocked. Anne is not taken to crying and emotion. With my arm around her, I led her over to a log in the shade and asked her to sit. She downed a Diet Coke and munched on some treats. Finally, she stood up and gathered her poles. "What's that bracelet you've been wearing all week?" I asked. It was obviously rubber and sort of pretty, but I wondered if it had a purpose.

"Oh yeah, Mark gave it to me. It helps with balance," she stated matter-of-factly. 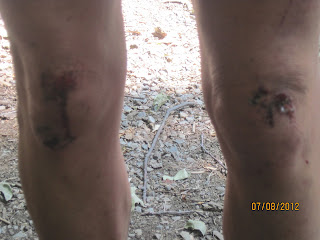 "Balance? Really? How's that working for you?" I asked, glancing down at her bloodied and bruised knees. Then our eyes met and we broke out in fits of laughter. How ironic! But her mood lifted and off she went. By the time she got back to my house, her resolution to quit waned, especially when Emma, her daughter, chided her.

"Mom. Your fans will be so disappointed if you quit. Quitting is not an option. You only have six more days."

With that, Anne ate a hearty dinner and prepared for another day on the trail.

To give Anne a head start, I drove her to the trail head before sunrise and watched as she began the ninth stage. I planned on meeting the runners after they completed the first ten miles. But alas, my drive up the Blue Ridge Parkway was thwarted by a huge tree that had blown over in another storm. It took a thirty mile detour to arrive at my appointed position. But arrive I did, catching all three runners. Throughout the day, I held my breath that I would be able to manage the rough back roads in my Honda Civic station wagon. I winced whenever I heard the road rise up to meet the bottom of the car. Thankfully, I was able to meet them no less than five times that day.

By the time I saw them for the fourth time, a storm blew in, dropping heavy rain and lighting up the darkened sky with bolts of lightning and loud thunder. At least they wouldn't be hot any longer. Anne didn't look like she was relishing the weather. I hoped, for her sake, it would be short-lived.

I thought about heading home, now that they had only the last ten miles to cover. But instead, I made my way along back roads and finally arrived at the road leading to their stopping point. "Four-wheel vehicles only beyond this point. Cars not recommended." Oops. It would be a long walk out (about four miles) if I couldn't get to them. It was obvious the van had no chance of making it. It was up to me. With that, I swallowed my fear and headed in. All was well until the spot where a stream and road intersected. Large gravel had been dumped in the stream bed, perhaps a foot deep. I got out to take a look, thinking the car would sink into the stone. I was right. It did. But with speed, I managed to emerge on the other side. It was all about momentum. Whew. Disaster averted.

I was alone at the end of the road. That was worrisome. Off I trekked to the where the AT crossed the rugged Jeep Road. Gathering sticks, I barricaded the trail heading further north and made a sequence of arrows all the way down the hill and to the waiting car. Soon after, as I thumbed to the spot I left off reading in my book, I glanced up to see Troy approach. Yeah! Then Eric, and in another twenty minutes, Anne. Now all we had to do was get the car back across the stream and meet the crew in a nearby camping spot. Easier said than done. 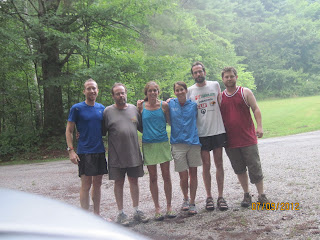 It almost didn't happen. But with all the courage I could muster, I asked my passengers to hold on. Wheels spun, rocks flew, and water went every which way when we hit a big hole on the other side. We made it across and it seemed like the car was intact. (At least no parts were scattered on the ground.) I think it took about five minutes for my heart rate to come back down. Soon, we were back at camp where the runners posed for a parting picture before showering away the day's grime.

Then came the drive home. I had learned a lot from watching them persevere. Especially Anne. So tough. My mind was busy contemplating suffering and endurance, desire for the extreme and the commitment it takes to achieve. I was glad I could be of service for a couple days, hanging onto the feeling of kinship with the others.

Now, the event is over and I can finally stop mulling over the happenings. I was glad to be a part of the event, even the way it turned out for me. Lessons learned, life goes on.

Rebekah, I have just caught up on your blog after weeks of summer have gone by. You remain an inspiration to me as a mom, a runner, and a professional. Way to go on toeing the line for the Tour and taking things as they come!! Amazing really.
If the heat this summer ever gives in maybe we will all feel better. The miles have been tough as well here in CT. I am hanging in waiting for some cooler air. Slumping a bit as well, looking at your days to go miles I am in a similar place. Hang tough :)
Carrie