The morning was cool and inviting. Drawing in the air, still damp from an overnight rain, I stepped out the door for a run. In the early dawn, I had the streets of this quaint village to myself. Trees eighty feet tall rimmed the perfectly manicured yards. Flowers cascaded over stone walls like water rushing down the falls. In the middle of town stood a granite tribute to the fallen soldiers of the Civil War, approximately one hundred-eighty names strong.

Still running down one hill and up another, I turned onto a particularly steep street. There at the top, an old cemetery stood guard over the hillside. With the mist rising into the first rays of dawn, it was breathtaking. The straight rows summoned me to run amongst the graves. The dates on the stones indicated the long history of this town. There were simple graves marked by small, flat stones, the etchings worn and barely legible. Tall monuments stood nearby in contrast, perhaps indicating the social standing of the family. Some plots bore multiple graves; fathers, mothers, children all buried side by side.

But tucked into a corner and away from the hundreds of other graves stood three headstones. I noted one stone held a bronzed plaque with the standard information; name, military rank, date of birth and death. Oddly, the other two headstones were plain granite slabs. There were no names, no personal information, no way to connect to the past. Perhaps the tombstones were intended for those who yet lived. But I was confused. Remnants of flower arrangements and plastic bouquets surrounded the markers as if out of respect for the dead. If the remains of the deceased did share that hillside, it was not much of a legacy for either one. 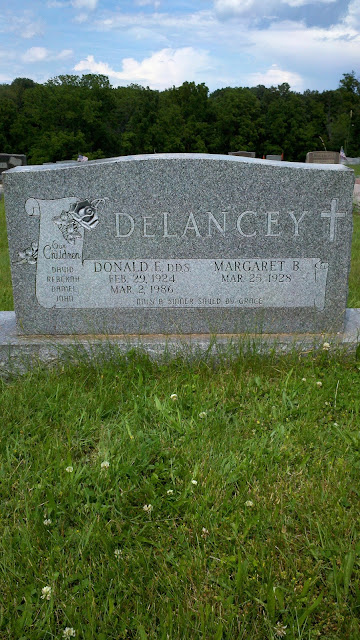 For by grace are we saved by faith, and that not of ourselves, it is a gift of God, not of works, lest any man can boast. (Ephesians 2:8, 9)