Not just another birthday

I went to bed in a funk. I woke up in a funk. Not because I was upset being at the precipice of another birthday, but because my brain cells were stuck thinking about a disconcerting situation. Yea, yea. I know. "Why worry when you can pray?" Guess I'm still working on that one. With a 100K approaching two weeks hither, it was important to get in a long run despite the "funk." With snow and ice piled up in the mountains, the thought of a slogfest was not that appealing. And a solo road run? Less than appealing. So I did what any reasonable TrailMama would do. Last evening I sent out a Facebook message to my band of loyal Shindigglers and asked if they would join me. "Yes!"
came the answer. There. It was settled. Now I HAD to get my posterior end out the door and down the road.

But not before the door flung open this morning to the sound of music (at least I think that's what that sound is called). In they came singing "Happy birthday to you. . .", bearing gifts to boot. A plethora of trail food snacks, gift cards for ice cream and food, letters carefully scripted, cards thoughtfully signed, and a framed picture collage of moments from previous adventures. Oh my heart! The funk was nowhere to be found, replaced, that is, by the love and enthusiasm of these college girls and a couple token guys. 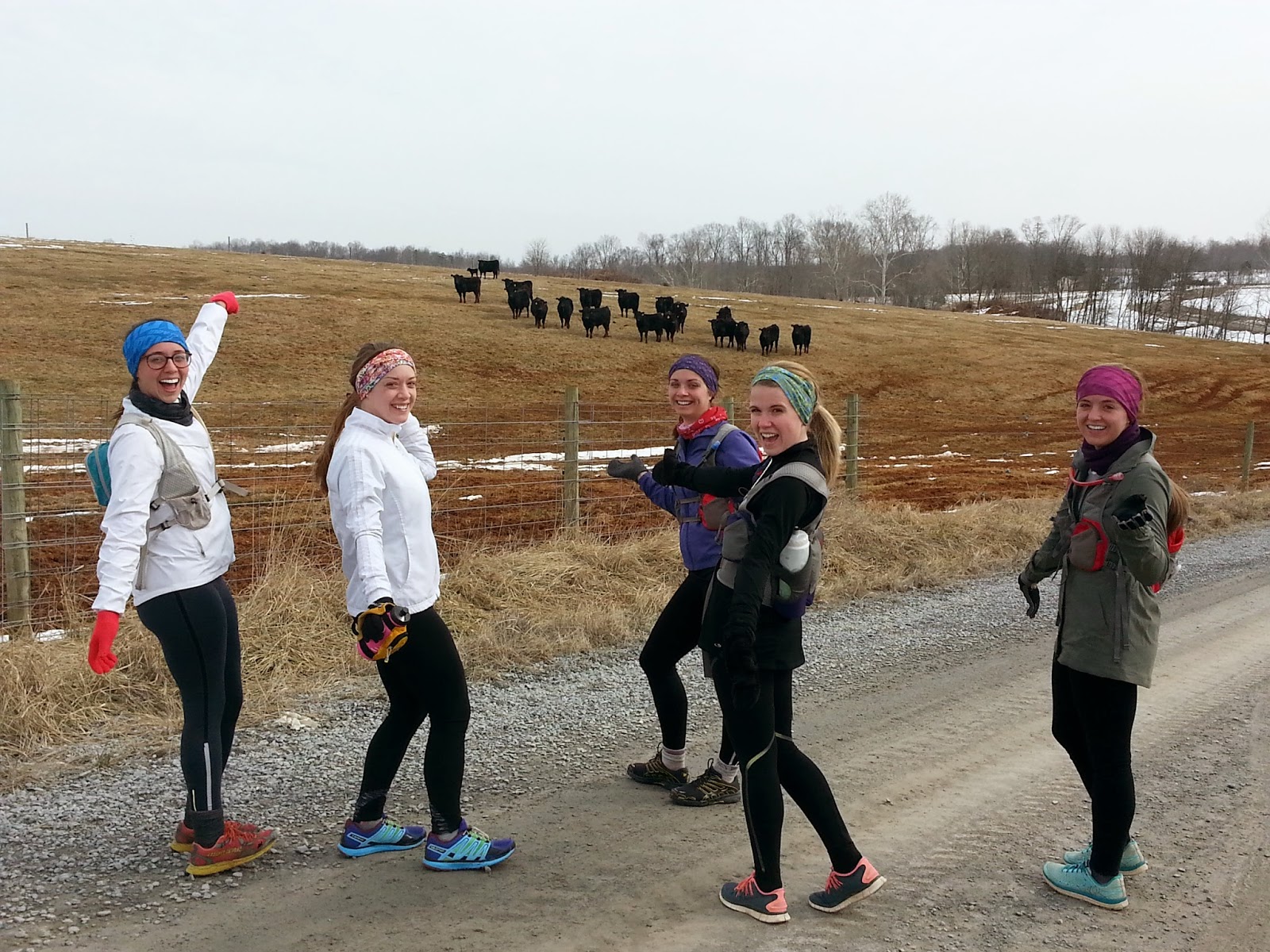 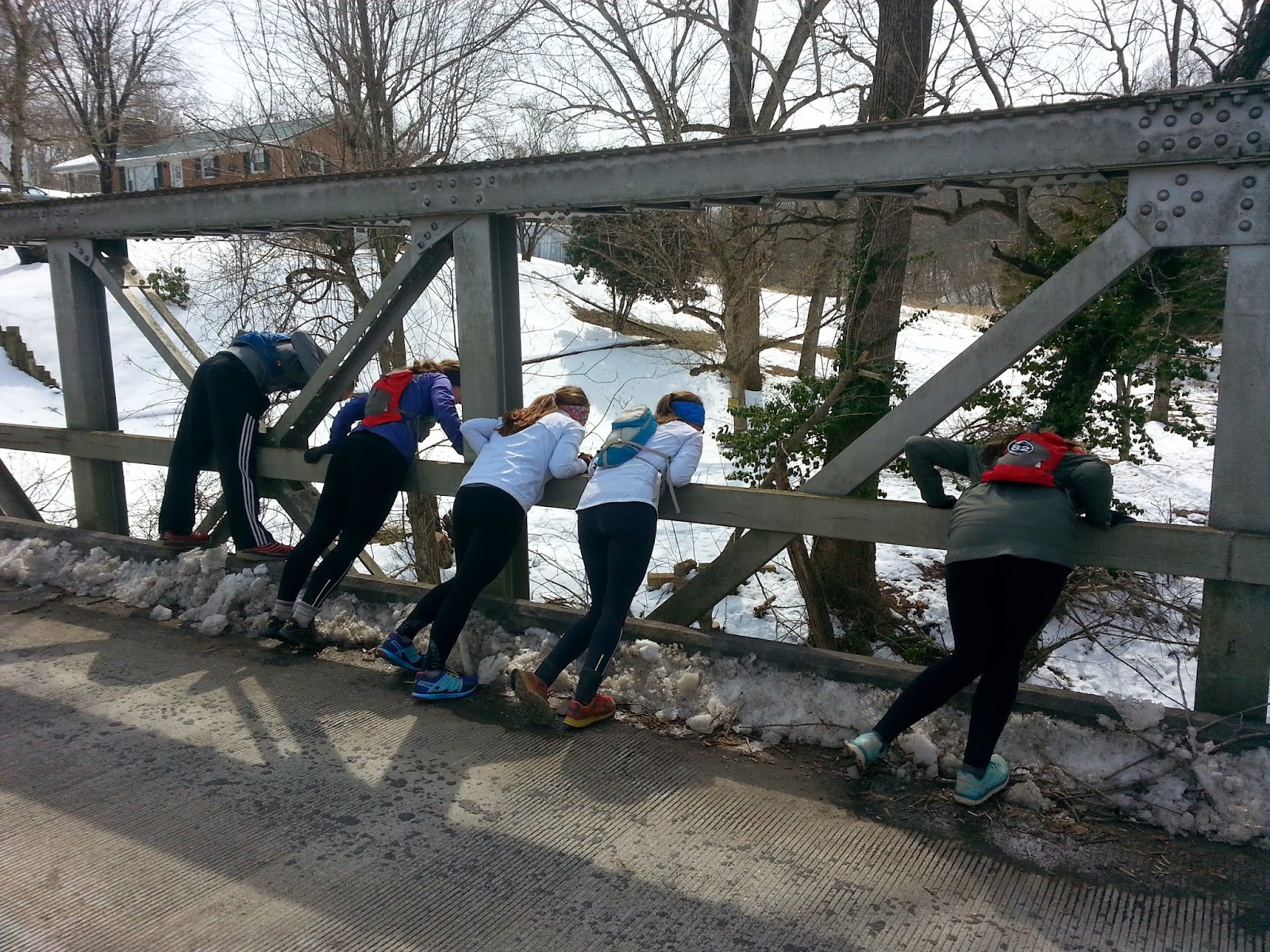 We spent the next three-plus hours running, laughing, stopping for photo ops (a vainly-disguised excuse to pause when we grew weary), and wondering why it wasn't getting any warmer. There were cows to chase, "Poo Sticks" (as in Winnie-the) thrown into the stream from the bridge, human pyramids to build, and musing about what conditions might be like atop the tall mountains in the back drop of our view. The new guy shared his story of grace and mercy, while others told stories of significant encounters and progress in their Christian lives. Fruit snacks and energy gels got eagerly snarfed down to fuel the endeavor.

Every step was uplifting, no matter the toll the accumulating miles took on our legs. "Coach T," Sarah rang out. "It's a longstanding tradition to take turns voicing what we appreciate about you." And so it began. Despite temps in the teens, my heart melted into a molten mass. Could it all be true? Do they love me that much? I hoped so. There was no doubt I loved each one of them. 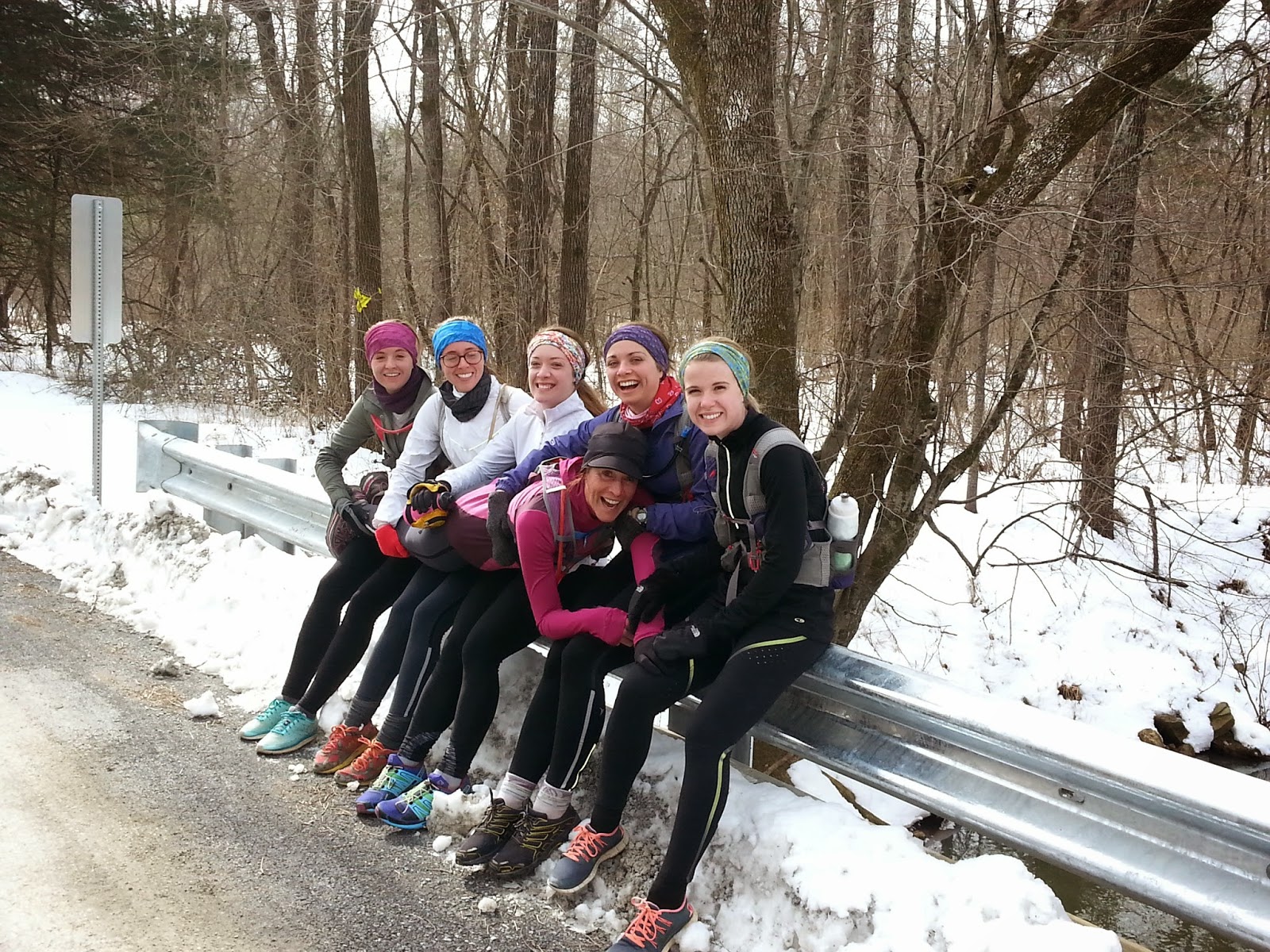 When the country roads led us home, the house nearly burst with giggles, the aroma of hastily created pizza, and the sweet, gooey goodness of oven-broiled s'mores. A DVR'ed episode of Fixer Upper produced ohs, ahs, and girl bonding time as all six of us piled onto my bed to soak in the glory of realty re-dos.

So yeah, it wasn't just another birthday. It was a day to be remembered. A day to be cherished. A day to relive over and over again.

Thank you, my little Shindigglers. Tough but tender. Serious but silly. Centered but just a tad to the right of crazy.

The training was in the bag. Test time was moments away. But in the darkness of the frigid morn, I couldn't find The Shindigglers. Where were they? How hard could it be to find my five favorite girls? Still, among the nearly 250 runners plus volunteers and onlookers, they remained illusive until the waning moments before take-off time. There was no time for even the briefest version of my pre-planned, pre-race advise and encouragement. No pre-race pictures to compare to post-race later on. Brief hugs had to do. And at the last minute, a note was slipped into my hand. "Coach T. Read this when the going gets tough." I didn't have the heart to tell them I didn't put my contacts in. Still, I slipped it in my pocket and purposed to read it in the aftermath. 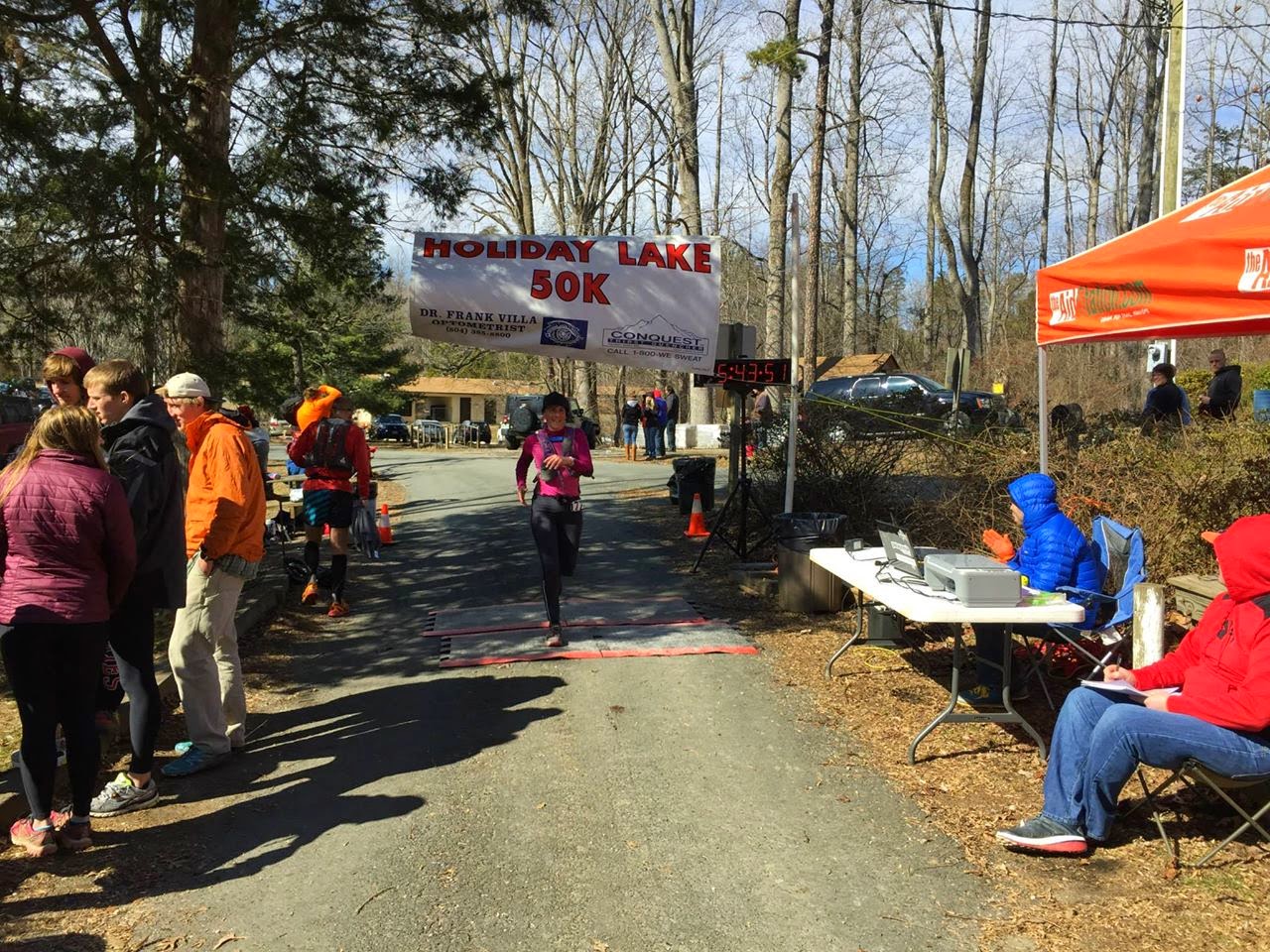 This was my tenth running of the race, the last version in 2008. For four of the five girls, this was their first long race. The fifth was more experienced with about 5 ultras under her belt. When I began coaching four of these five kids five years ago, I heard some parents were fearful they would turn into ultrarunners. I guess they were right to be concerned. 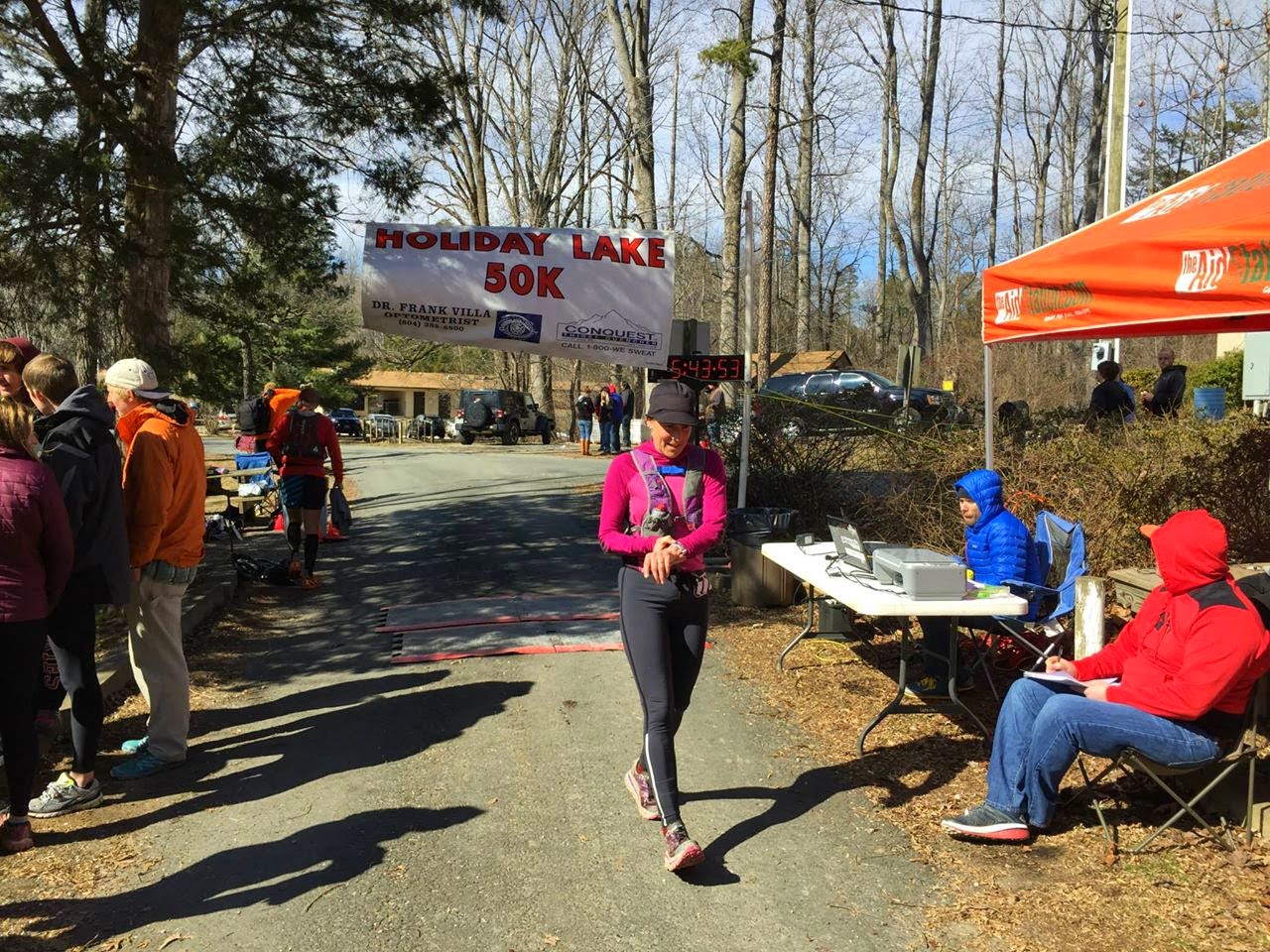 This race, a reverse double loop course, allows a runner to see all the other runners coming or going. I chased Sarah for the first loop, catching glimpses of her blue jacket just ahead of me. She didn't know I lurked until she spotted me through the trees on a hairpin turn. She waved and politely smiled. And then she ran faster. Despite the pleasant surprise of steady and strong running on my part, I chased her from behind the rest of the day. She beat me to the line by about seven minutes. We might need to discuss whether or not this is the proper level of respect for her elder.

The other four, taking a more conservative approach, ran behind me. Abby and Kendal looked like they were having fun. Rebecca was not. IT band pain produced tears at the turn-around point. But quit? Never, no never! Caroline, her sister, took to her side, offered encouragement, and led them through the finish line as sisters united. Six Shindiggler starts. Six Shindiggler finishes. It was a very good day. It was a test passed with flying colors.

And that note? They carried a copy as well. It was what inspired them. . .and that inspires me.

Words to run by:  "These are my kind of girls. They are tough but tender. Serious but silly. Centered but just a tad to the right of crazy. May we shindiggle together over many more miles" Coach T 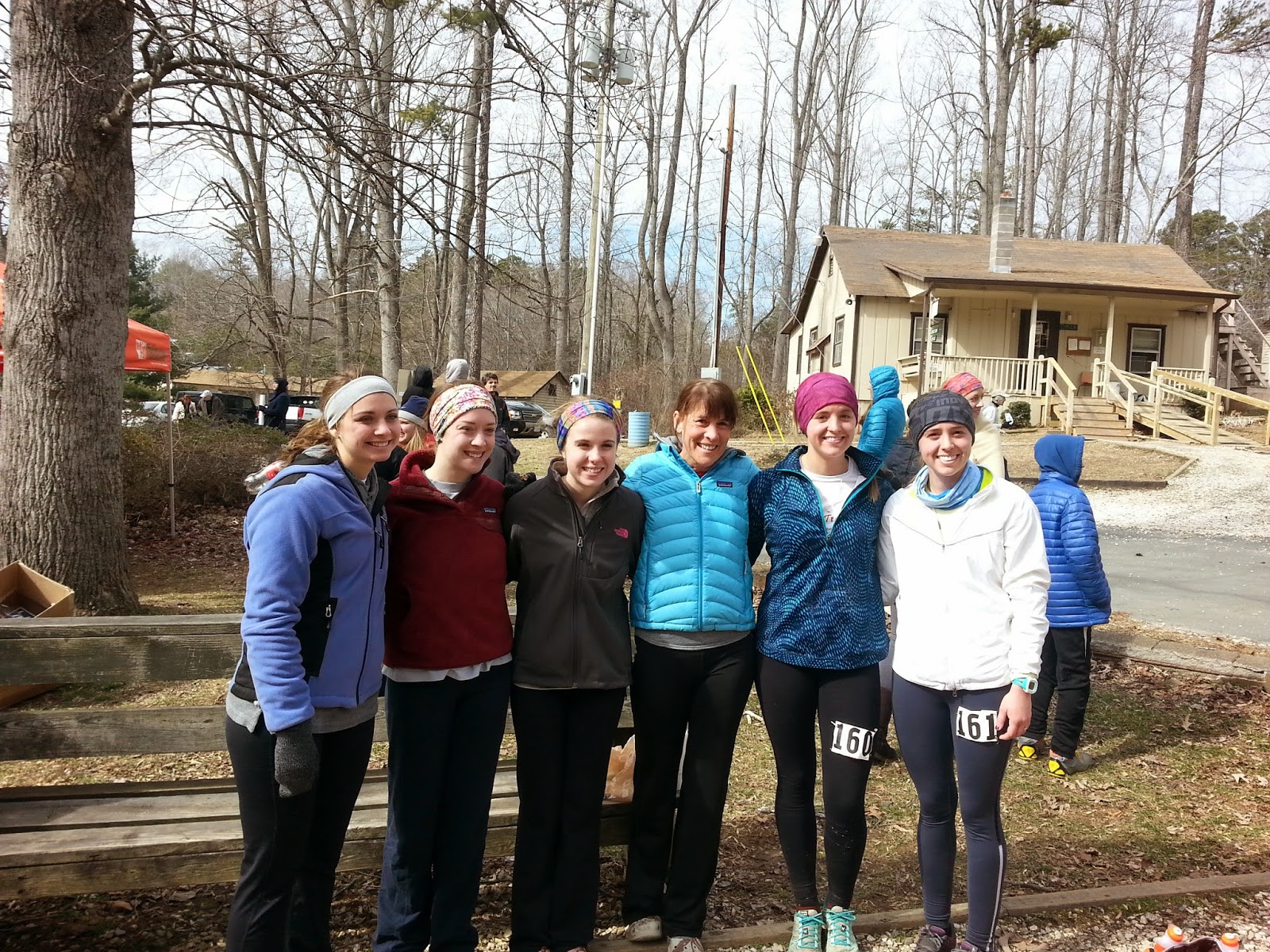 Songs to run by: In Christ Alone, Never Once Did I Walk Alone, Courageous, Ain't No Mountain High Enough


Verses to run by: "You, Lord, keep my lamp burning; my God turns my darkness into light. With your help I can advance against a troop; with my God I can scale a wall. As for God, his way is perfect:The Lord’s word is flawless; he shields all who take refuge in him. For who is God besides the Lord? And who is the Rock except our God? It is God who arms me with strength and keeps my way secure. He makes my feet like the feet of a deer; he causes me to stand on the heights. He trains my hands for battle; my arms can bend a bow of bronze. You make your saving help my shield, and your right hand sustains me; your help has made me great. You provide a broad path for my feet, so that my ankles do not give way. (Psalms 18:28-36)

Did they ace the test or barely skim by? They aced it absolutely and in so many ways! Second test is scheduled for March 21. Stay tuned and Shindiggle on.

Postscript: On a number of our Shindiggler events, we've allowed a boy to go. Ben, (or is it Sam?), is a welcome member of our training runs. But sorry, Whipped Puppy Boy, (I think he's in love with an certain Shindiggler), you have to possess two X chromosomes to be a true Shindiggler. Nothing personal. We still like you.

Photo credit on the finish line pictures goes to Martha Wright. Thanks!