My kind of girls

Partially-filled plastic cup in hand, I climbed the step stool to do battle with the stink bugs that came in for an impromptu landing on the kitchen ceiling light. It's an easy job to hold the cup up to the not-so-bright insects and watch them jump in for the finals of the backstroke. But it seemed a bit harder tonight. It wasn't so much increased resistance to take the pesty plunge, nor was it climbing the two steps of the plastic ladder. It was coming back down that got my attention.

"Yowza! My quads are REALLY sore," my brain registered as my arms reached for the countertop for balance. All day I had been feeling it. I had to be intentional about the act of standing, using my arms to provide another little push. And sitting? Well, it was the same thing in reverse. But tell you what. This was a pain that hurt so good. So good? Yes. It's the best pain I've felt in years.

21 years ago I was told I couldn't run 50 miles. "Watch me." That was the beginning of a long career marked by ups and downs, fear and failure, triumph and tragedy. Many of those years were under the watchful eye of a mentor and complimented by a running cadre that lived for the weekly group run. But the time came when I adopted the mantra, "Run silent. Run deep." Solo runs, introspective, quiet, and interrupted only by the sounds of falling leaves or snapping twigs under my feet became the norm out of necessity. And that was okay. For a period.

I've moved on. I am now the mentor. College students, once part of my coaching responsibility when they were in high school, have morphed into ultra-distance runners. They have drunk the Kool-Aid. They have become what their parents feared should they hang around with me. Their perspective of what is normal has shifted off-center. They spend hard-earned money to enter long races and assume the responsibility to train. And I love it.

I put out a Facebook message to this special group of girls; The Shindigglers, as we like to call ourselves. "Want to go long in the mountains on Saturday?" knowing all would be towing a start line in just a few weeks.

"Yes! We were going to run a loop at Holiday Lake but we like the mountains better. Can two more friends come?"

"OK. Where and when?" I wrote. Their answer let me decide. I knew they needed to see something new. Something that would get their attention. Something they would be hard-pressed to forget. "I'll be at your house at 6:15 a.m. with packs for everyone." I barely slept, anticipating their response to the huge, ominous mountains we would climb and descend.

Including me, it was six girls and one guy. Poor guy. It could have been awkward but he fit right in, taking his rightful turn as we devised fanciful stories to pass the time on relentless climbs. He even took our pee stops in stride by gazing off in another direction. I suppose we'll let him come on other runs.

Only on the very steepest sections of trail did the forest enjoy peace and quiet. Other than that, it was non-stop chatter and jokes, story-telling, singing, lots of stops to appreciate the vistas and record it on camera phone for 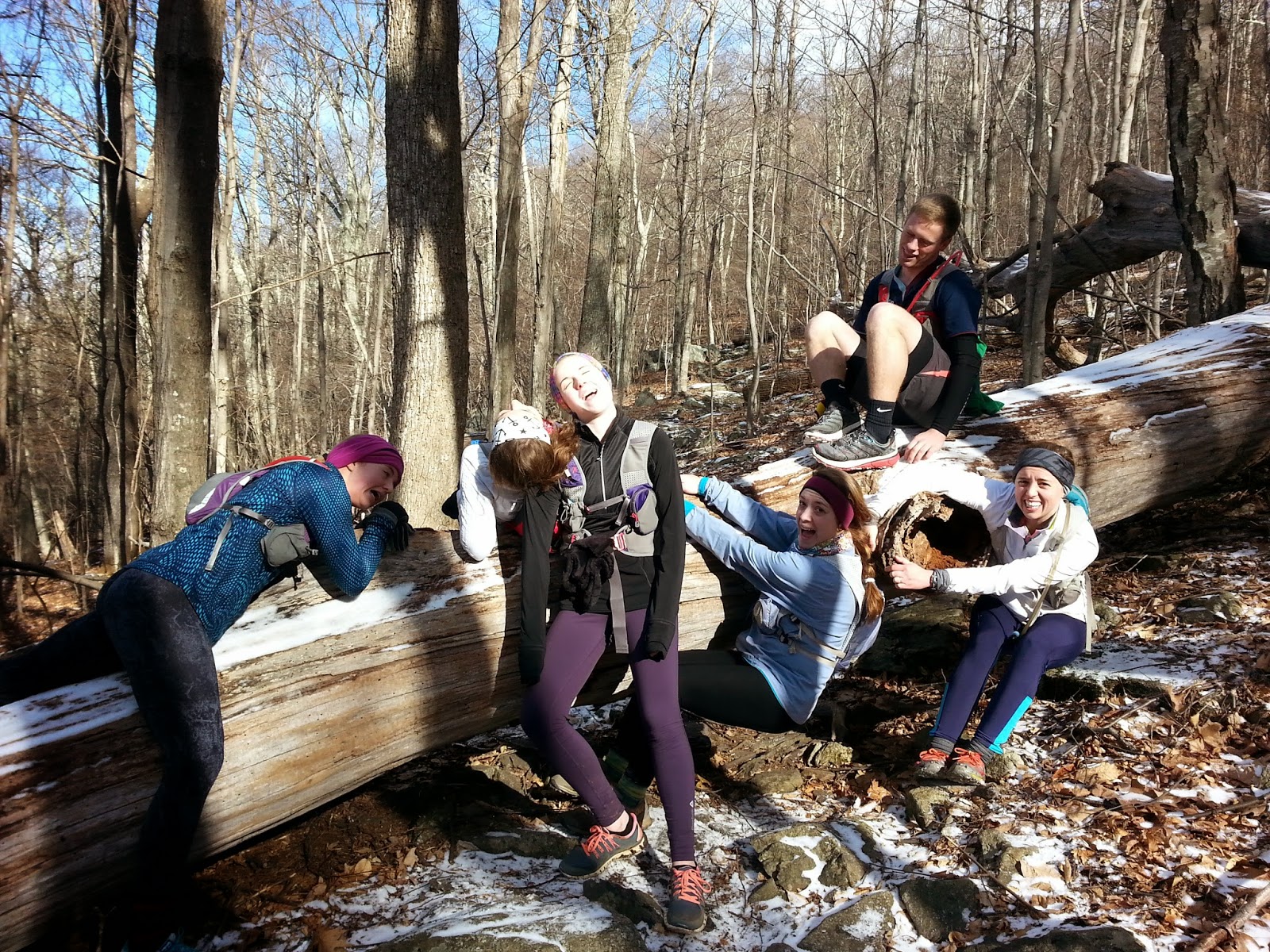 posterity's sake. Never once was there complaining or whining, even when a distant peak was pointed out as the next stop on our woodland tour. They dutifully let me lead, perhaps out of respect for their elder. Or perhaps it was simply that I knew the way and they didn't. But whatever the reason, a brief pause at a large fallen log led me to exclaim, "You know, there is no place I would rather be right now." And I meant every word. 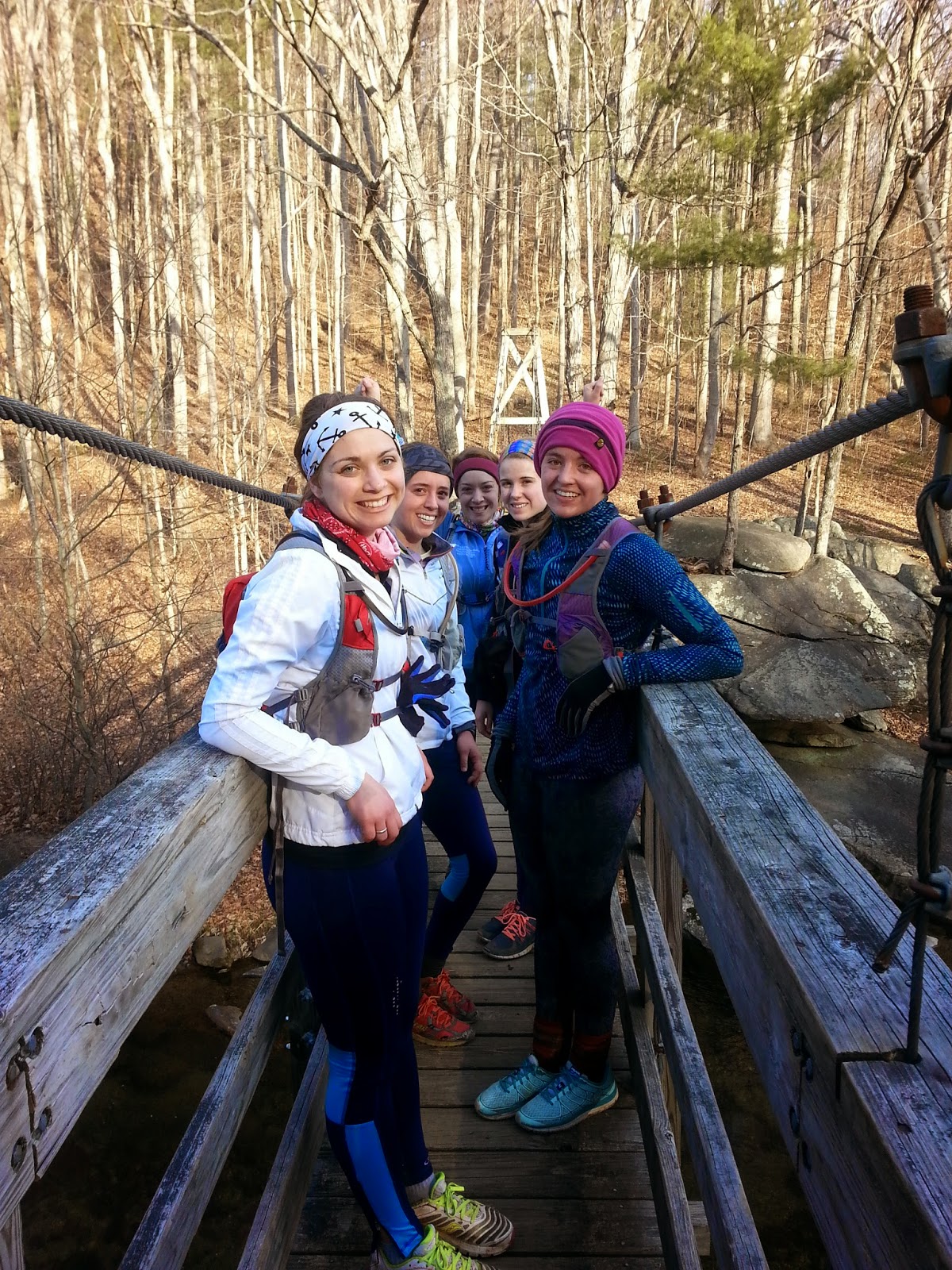 There is no greater joy than to see others come to value what you do. I LOVE seeing these kids embrace the challenge. I LOVE being able to show them the ropes and the way. I LOVE remembering conversations from eons ago on other runs, only to hear myself enter into a similar conversation with current company at the same spot on the mountain.  I LOVE the "Dear Coach T" verbal letters they create for me. I LOVE the fact they get excited to gaze across the valley to the tallest mountain and marvel they were already there. I LOVE to see them take one step at a time to reach a seemingly impossible and distant mountain. I LOVE that a sign indicating less than two miles to go inspires a spontaneous outbreak of song all the way down to the river. I LOVE that they LOVE what I LOVE. I LOVE these kids, and I LOVE that they LOVE me enough to follow in my footsteps.

These girls are my kind of girls. They are tough but tender. Serious but silly. Centered but just a tad to the right of crazy.

May we shindiggle together over many more miles.