I had never run an actual 24-hour race. Yes, I had been on my feet longer, much longer in fact. But I had never set off to see how far I could go in a full day. It seemed like a splendid idea to hit the "Register now" button. But then again, I was sitting in my favorite chair in the comfort of my living room. Silly me. 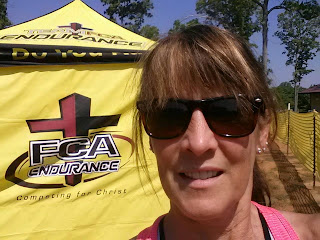 Repeat this as many times as possible in 24 hours: a five mile loop on single and double track trail along with short sections of gravel road. It was a simple task to understand. There is a mere 124 feet of elevation gain per lap. Although I would discover one gruesomely evil and steep hill, there was no real fear of trashed quads or tortured hamstrings from punishing downhills or miles-long climbs. Accordingly, I settled on a 100-mile goal since I have run 100 miles in less than 21 hours. (We won't mention it was when I was a 41 year-old in 1998.) Still, considering the circumstances I thought it was within the realm of possibility.

What I didn't consider was 90 degree heat and awful humidity. The high noon start meant running in the heat of the day. It didn't seem to matter to the relay team runners who began their one-loop-at-a-time assault of the course with a flurry. Me? I had no choice but to be conservative, trying to take small sips from the bottle I carried along the way and maintaining a comfortable, easy pace.

Did I say it was hot? Whew. My skin turned into this sweaty, slimy, sticky mess. I switched out my Ultraspire Spry pack for the Ultraspire MBS Ion single bottle waist pack. As tiny as the Spry pack is, it was just too sweltering to have that thing plastered against my back. I made it a point to slurp a bottle of my electrolyte drink by the time I got to the 2.5 mile aid station, and then refill and down that bottle by the time I returned to the start/finish.

It was a good plan that held through the first four or five loops. But as the heat refused to let go of its death grip, the fluid I was trying to take in seemingly turned rancid. Not that the liquids were actually spoiled, but nothing was cold. No ice. Everything just equilibrated with the air temperature. It became harder and harder to drink. It didn't help that the small selection of typical race fair (M&Ms, pretzels, soggy Oreos, Pringles, and stale PB&J quarters) became less and less appealing with every drop of 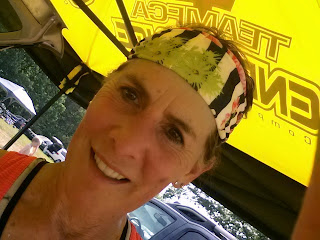 sweat exuded from my pores.

My goal for 100 miles in 24 hours needed readjustment when the first 20 miles took just under five hours. "OK. It will need to be 80," I decided. As night fell, I continued to make progress, howbeit slow, methodical, and calculated. Expectantly, I awaited a drop in temperature and cooling breezes. That never came. What did come, unfortunately, was wretching and puking. Just putting something to my lips made me gag. My fluid and calorie deficit climbed in concert with the miles. I was in trouble.

My sweet, sweet Shindigglers were expected by midnight. I could hold on until then. Sure enough, there they came- right after another violent round of expelling unidentifiable black vomit. They found me laid out - and wiped out - on my sleeping pad underneath my tent. Their eyes widened, revealing worry and fright. "Coach T, you don't look too good." I suspect that was a grand understatement.

Within a few minutes, I stood, sipped a little more on a cup of tomato soup, ate a few cheese puffs (which surprisingly was the only half-way palatable thing I could find in my private stash of food), and again switched on my headlight. "Let's go." The two pairs of sisters obediently fell in behind, the chatter bobbing along in sync with our headlight beams.

I felt better in this company. My legs were fine and responded to the task of taking me down the trail, only revolting slightly when stumbles brought on intense but fleeting cramping. Still, we moved forward, happy to be together in the stillness of the night. I tried to sip from the bottle at my waist but just couldn't swallow it down. I sat for a few minutes on the bench at the middle aid station while our banter broke up the monotony for the worker. He laughed. I'm not sure if it was with us or at us. As we continued on, I acted like the tour guide, pointing out each landmark now so familiar to me, though veiled behind the curtains of the darkened forest. We mostly hiked. Running simply jostled my already confused insides and threatened an impending eruption. It was the best I could do.

Another loop completed, one sister duo, Rebecca and Caroline, regretfully announced they needed to head home. They had duties at church come morning. We said goodbye and then rested a few more minutes, allowing me to nibble and sip. Then off we went for more of the same.

Other loop. Another 5 miles. The total was up to 50 and I had nine or ten hours to go. Surely, I could  put in another 20 or 30. But the tank was nearly empty. I tried to get down some chicken rice soup, a good source for restoring sodium. But my gag response, fully intact, denied access. I laid down, covered my stinky self with my sleeping bag and closed my eyes, though never actually sleeping.

Sarah and Abby dozed off as I mentally assessed my situation. Was I in bad shape? Yes. Have I been worse. Yes. Did my legs still work? Could I still run or hike? Double yes. Could I get in real medical trouble should I continue without being able to eat or drink? Probably. Was it possible to make it 80 miles and set the women's course record, low as it might seem? Maybe. Did I care? Was it worth it? Hum. I couldn't decide. What should I do? The battle raged on between my sleep-deprived neurons. Quitters remorse is always bitter. I didn't want that. But did I want to proceed under these circumstances? Did I want to take on more unrelenting heat and oppressive humidity that promised to rise with the sun? I glanced at my snoozing friends. What message would I send to them? Would they be disappointed? Was I being a wimp? Would I be the bad example of a coach who declines to practice what she preaches: one step at a time? I hated the battle raging inside my head and heart but had no power to draw the sword and make a decision.

Jump backwards to another race; the Thomas Jefferson 100K. I wrote how difficult that race was for me back in March; single track, rain, mud, fatigue, discouragement, persistence. And yet there was never any thought, not even the tiniest hint, of quitting. I ate, I drank, I slipped and slid my way along that mud-slicked terrain until I claimed the clearly-defined finish: 7 loops. 63 miles. That's what it had to be if I was going to be successful. So, that's what it was. That's what it took. I finished.

In contrast, the Hat Creek 24 hour solo race had no clearly defined goal. Yes, I was to run as many miles as possible in 24 hours. But only whole loops counted. It's not like everyone was supposed to stay in motion until the clock struck noon. If you finished a loop at 23 hours and could not complete the next loop within 60 minutes, the race was over for you. As the only woman I had "won" the race no matter how far I went. Except for pride and bragging rights, why continue to suffer? But remember, I really did have a problem to consider: there's no doubt I was way behind in fluids and calories. I had lost what little I had taken in by vomiting and diarrhea. I couldn't remember the last time I had peed. I didn't want to make recovery a long, drawn out process, nor did I want to get worse and tempt a catastrophic downward medical spiral.

As the battle raged on, I opened my eyes and realized the sky was a tad lighter than before. Dawn was going to crack in an hour or so. I decided to put on my shoes and quietly slip off across the field and down the trail for at least another loop. I would let my friends enjoy their respite. But just as I reached for my shoes, Sarah, who had sunk into the cradle of a camp chair, blinked open her eyes. In that moment something happened. I'm not sure I understand it but I remember saying, "Would anyone be disappointed if we didn't go out again?" The response was a resounding "no." That was it. The switch had unexpectedly flipped. I laid there a little bit longer, watching relay runners, 12 hour runners, and the handful of remaining 24 hour runners drift in and out of camp on the way to their own finish lines. I felt hollow and empty.

For nearly a week, I've been contemplating my race and decision to stop with so many hours left to run. Why did I do what I did? Was it the right decision? Here are my thoughts.
So there it is. A tale of two races and two outcomes. The moral of the story? Not withstanding the medical part of the decision, success can only be achieved by keeping our eye on the goal; focusing on the task and relentlessly pursuing it. Just like a farmer atop his tractor, he'll never plow a straight line  and stay the course if he loses his razor-sharp focus on a stationary object across the field. Fixed to that point and drawn toward it, no dirt pile, rock, or turned up obstacle will force him off track. And so it is in life. It might get bumpy and unpredictable, but setting course for the fixed goal on our horizon will keep us true to the task and moving forward.

And let us run with perseverance the race marked out for us, fixing our eyes on Jesus, the pioneer and perfecter of faith. For the joy set before him he endured the cross, scorning its shame, and sat down at the right hand of the throne of God. Consider him who endured such opposition from sinners, so that you will not grow weary and lose heart.
Hebrews 12: 1b-3

Pacing himself for 5 years

My spirits were buoyed when I received the following email this morning.

"Today, I completed my 5th reading of Pace Yourself. Tomorrow will begin my 6th year. Thank you for all of the work you put into the devotions. They are an important part of my day. Thank you."

Wow. I am thrilled and honored!

It's never too late to begin your streak of reading! Order here and get free shipping and $4.00 off retail pricing!

Pulling into the driveway at 0345, Rachel quickly made her way to the car. The prepared bag of extra clothes and snacks went into the back s...