There he was. Sitting amidst his belongings accumulated over a life time, apparently unfazed by the chaos around him.

On this day he was insistent on returning to his home after moving into ours. We were concerned it would be too difficult since the goal was to empty his house and sell what we could. Some of us arrived on Friday and began the lengthy process of sorting, moving, organizing, but mostly discarding. Nevertheless, on Saturday morning he got in the car with my husband, Gary, and made four hour trip. Upon arrival, a kind neighbor escorted him to his house across the street, offering ice cream and car shows on TV as motivation to visit. But after some time, my father-in-law tootled back across the street, anxious to see what was going on.

We watched anxiously as he made his way to the already-packed dumpster to view the contents. Would he pull that old, stained coat back out? Would he fuss about the broken-up bookshelf that had to be trashed? Though he said nothing, he silently perused the pile of discarded items before moving to the box spring positioned in the middle of the front lawn. He unceremoniously took a seat. There, surrounded by furniture, dishware, appliances and pictures, he flipped through the colorful pages of one particularly interesting book out of the 1000's he had accumulated. 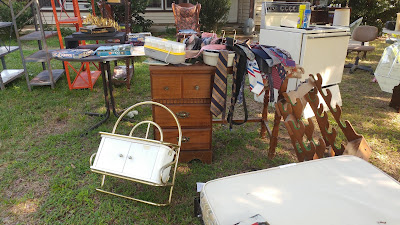 My husband and son, Seth, huddled together by the truck. "Come here," they requested. "Look at this." Before glancing down at Seth's camera, I noticed the guys both had misty eyes. I wondered why, but not for long. Peering at the recorded images, the significance of the moment was captured. There was Dad, now in 90's, surrounded by a yard-ful of "stuff," and absolutely none of it mattered. Now I cried.

This transition has probably been harder for us than for Dad. He often has difficulty remembering from one minute to the next. He searches for words that never come. Even the simplest, repetitive tasks can seem like insurmountable challenges. He does seem to appreciate the items we saved to fill his room, most of which have special meaning: pictures of his now-deceased wife, a record-breaking turkey mount he shot years ago when hunting with Gary, and memories of his time in the Army Air Corp back in the 1940's.

On a good day, he can enter into brief conversation, especially if it concerns something far in his past. He is never mean or cantankerous, but mostly sits in silence, nodding off from time to time. Bring him a cup of coffee and he is sure to say, "Thank you, dear. Thank you" in all sincerity. Dad is kind and sweet, even if unaware and detached most of the time.

He does many odd things that cause us to either shake our head in disbelief or try to suppress a chuckle. Some of the stories he comes up with make us laugh, like when he told us last night that he and some of his boyhood friends got on their bicycles and pedaled to Alaska. (He lived in Illinois.) The search for the thirty pound white rabbit that he swears he has seen for years has reached near-epic tale status.

Dad needs help with nearly everything. Thankfully, he no longer drives, after an intended five-mile trip to the local Walmart turned into a 300 plus-mile adventure when he could not find his way home. He forgets how to make his oatmeal, requires assistance in showering, and needs his clothes laid out. Though we prepare healthy meals, he merely nibbles, preferring to eat gallons of ice cream throughout the days. We never know what we will find in (or out) of the refrigerator or freezer.

Sometimes Dad will get up and start wandering around. Yesterday we watched him open the front door, bowl of dry Cocoa Puffs in hand, and make his way down to the barn despite the wind, cold, and rain. We have no idea what he did or why he went. Countless other times, he ends up in the kitchen opening cupboard doors, unable to articulate what he is looking for. We've noticed he starts humming when he is clueless. He hums a lot these days. We'll watch as he picks up a mug, adds at least a quarter cup of brown sugar, fills it halfway with water, all before microwaving his "coffee." There is neither rhyme nor reason for 98.7% of what he does.

I don't think he processes very well. During a World Series game, I asked him who was winning. He said, "This pitcher is doing great. He just struck out this guy." In actuality, the hitter just put one over the fence as the crowd went wild. He seldom knows what day it is, and gets very confused if one of us is late in coming home. When our cat decides to change her hang-out spot, Dad is sure that kitty has been lost forever. He loves to watch car shows but when asked, is unable to describe what is happening. (He will, however, belly-laugh at many of the commercials.)

Having Dad in the home has changed our dynamic. It is difficult and sometimes frustrating. We have to give special attention in making sure he is not home alone for too long. Plans we had to get away have been abandoned since he is unable to stay by himself. He does crazy stuff that can be so bothersome and annoying. And yet, having him here is giving us (make that "I") opportunity to develop patience and graciousness, to extend mercy and understanding, and to be loving and kind despite the circumstances.

We can learn from Addy. Addy loves her Great PopPop unconditionally, even though she told him last night he was too old to race
motorcycles. She lays her little head onto his lap and tells him "I love you." She gives nighttime smooches without hesitation.

Dad laughs out loud when Addy uses the couch as a trampoline, dumps out her toys and books, or adamantly exclaims, "I don't like vegetables." He beams when the Little Princess takes the house by storm on her scooter.

See, I guess Dad knows that all the "stuff" he no longer has wasn't really that important in the first place. He doesn't like his forgetfulness or declining mobility. But he values a grown son who will bath, dress him, and cut his gnarly toenails, a grandson who will drive him to appointments, and a great granddaughter who brings much joy to his life.

Not long ago, I was particularly frustrated. Dad just seemed to occupy every spot I needed to be in while preparing dinner. He had made a mess of the kitchen, there was brown sugar everywhere, and I found--once again-- his dirty dishes back in the drawers with the clean ones. Not life or death, but aggravating all the same.

Later on that evening and in a hurry, I was rushing to his room to put away laundry. I stopped short of the door. Dad was in there praying out loud (and in the Kings James vernacular, I must add.) "Oh mighty God, we thank thee for all thy blessings. . ."

"Father God, help me be more patient and kind. Help me love well even when it's inconvenient. Rid me of my selfishness that comes on all too easily. Let me learn from this man while he is in our home. Help me always hold him in highest esteem, and honor him as a man of God, the father of my husband, grandfather to my sons, and great-grandfather to our precious Addyson Leona. Amen."