I interrupted my desk work by heading out the door into the sunshine of a clear fall day. Running shoes laced, I decided a tour of the ever-changing landscape of Liberty University would be a good step in the right direction.

With multiple construction projects happening simultaneously, it's hard to keep up with all the changes. The constant beep-beep-beep of trucks backing up make 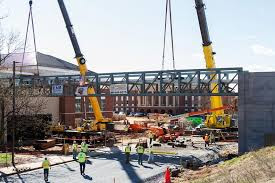 harmony with the explosion of nail guns. Steel workers prance atop the makings of the expansive domed roof of the new indoor football field, seemingly oblivious to the height and treacherous slope. Cranes, like monstrous prehistoric creatures, loom overhead, steel beams dangling as they are coaxed into place. Backhoes dig as bulldozers push. It's quite the sight and even a bit distracting to the runner afoot.

Enjoying the entertainment the construction world was providing, I came upon two workers on either side of the road. Each sat atop an over-turned five-gallon bucket. Both had been assigned a caution sign and neither one looked particularly enthralled with his duties. But despite the fact that a passing motorist would likely not be cautioned by the sign resting on the ground of the worker on the right, I decided to ask the other fella to explain the work behind him. It looked like a huge basin was being created, earth scooped up and hauled away by massive trucks. But why? I pondered. Were they creating a retention lake, clearing the way for the foundation of yet another building, or addressing an engineering issue? I didn't know. So I asked. 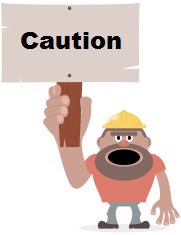 "Hey there. So what's happening behind you? Looks like a big project!"

With a grin widened by the gaps between the missing teeth, the affable man chuckled his response.
"Well, I don't know. I just hold the sign."

"Okay, then. I guess it will remain a mystery. Enjoy your day out here!" I replied.

"Oh, I will!" his tone suggesting he rather enjoyed this brief interruption to his bucket-sitting.

With a final look over my shoulder and a cheery "See ya," I continued along, dodging the warning signs placed smack-dab in the middle of the sidewalk.

My run continued, carrying me past several other construction sites. I noted with interest a number of other idle workers. Outside one tiny shack at the entrance to a work site, sat an elderly man sipping on a drink. It wasn't the first time I had seen him. Day in, day out, he sits in his chair and watches the trucks go by. I wondered if he was as clueless as the my new bucket-sitting friend.

Going through the motions. Oblivious. Why do more? Why know more?

Road sign holders and guard shack guys are not the only guilty parties. Being oblivious sure is a lot easier than being fully engaged.

As my run took me through campus and onward, I inventoried areas of my life that might include bucket-sitting. Am I, as the writer of Ephesians advises, being "very careful then, how you live, not as the unwise, but as the wise"? Or conversely, am I simply going through the motions, brain and thoughtful intentionality placed on the back burner? Am I being disciplined, well-informed, and in constant pursuit of excellence, or do I become lazy, content with past accomplishments?

God bless that dear bucket-sitter. But God help this gal to stay on her feet and keep making forward progress.