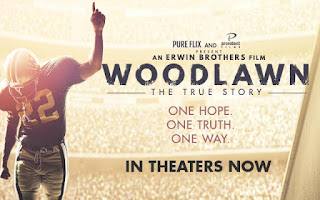 It was in the early 70's in Birmingham, Alabama. Volatile racial tensions exploded in outbursts of violence and revenge. Forced integration of public schools only ignited the fuse of the bombs - literal and otherwise - that tore the place part. But enter the power of the Gospel and the boldness of one individual who poured into the lives of a football team. Hearts changed and changed lives followed. Birmingham was not the same after that.

Having an afternoon free in Kansas City prior to some FCA (Fellowship of Christian Athletes) training, I took advantage of the rare block of time. A movie theater within walking distance of the hotel had Woodlawn slated for a 2:15 p.m. showing. After providentially chatting with a couple I met, I slipped into the sparsely occupied theater. It was not hard to find a seat among the mostly senior citizens spending an afternoon at the movies.

In the darkness, my mind whirled with thoughts and questions, and just a little bit of excited anticipation. I had not wanted to come to this "bootcamp" on approaches to funding ministry. But as I prayed for a changed attitude, God had given me a surprise opportunity to share the vision of FCA with that couple at the ticket counter. The chance encounter turned into a 20 minute conversation and an interest in becoming a part of the ministry to Central VA coaches and athletes. What would come next? 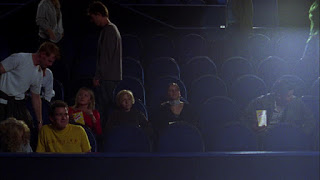 As the movie began and the story unfolded, the tears could not be contained. God appointed an FCA staffer to be in the right place at the right time with the right message. Once the truth took hold, the change could not be throttled. Revival  swept over players, coaches, parents, and the community. Though challenged because of their faith, the impact of Christ continued to roll onto shore, dramatically changing the social and cultural landscape. But unlike a tide that ultimately drags it's captures out to sea, the swell had lasting effect. Hearts were not the same. Peace and harmony, godly lives, and unity prevailed.

The real-life plot was riveting, the message powerful, and the story inspirational. But it was more personal for me. I saw what God can do- and did - through the ministry of FCA. So I contemplate: I am FCA. Can He use me like that? Will God be gracious to use me to produce a mighty work in His people?

I watched the credits roll as others made their way out of that theater, lost in my own thoughts and thankful the lights remained low. I felt my resolve for ministry grow and my commitment confirmed. What a privilege to be called to speak into lives of coaches and athletes. May Jesus Christ be pleased to use my feeble words to change hearts and lives.

Postscript: Check out the Woodland website to learn more and view the movie trailer below. Then get out and take the whole family to see this movie. You will not be disappointed!

Suffer a little while

The sky was overcast in the waning light and we knew it was only a matter of time. A few big drops
fell around me, likely sent from the heavens as the forward army scouts. They must have called in the rest of the troops for in an instant, the wind whipped up and sheets of rain descended. I glanced at my watch. Great. It was slightly after 6 p.m. Had I just left the start line of the Grindstone 100 a mere 14 trail miles away, I'm not sure my attitude would have been cheery and bright. It was hard enough setting up the aid station in the rain.

But one by one, we watched and waited to see the bobbing lightstreams emanating from headlamps as runners careened off the mountain on tricky, rocky trail. They came into the aid station soaked to the bone and anxious to replenish food and water. But amazingly, most didn't really seem to mind now that the rain had let up. Being off the mountain and out of the wind must have made the situation bearable. Yes, another tough mountain lay directly across the gravel road, and 87 miles stood between them and a finisher's buckle, but still, they gladly pushed on into the night and the unknown.

The relentless clock ticked away, marking off precious minutes, hours, and yes, even days for some. By late morning, the front runners came back to us, ready to confront the ominous mountain they had previously descended. Some were in great spirits and, though grimy and dirty, not really looking any worse from the wear of 87 tough miles.

But as the day wore on and the second night crept in, the mid and back-of-the-packers slowly made
their way into our station. They were tired and beat. Tomato soup and just-cooked quesadillas produced moans of appreciation. Some needed to recoup by taking a chair by the campfire that had been burning all day long. Heads hung low when the desire to sleep overcame the desire to take on the last huge climb. For those who sat, standing again unassisted was challenging. More than a few began the slow hobble up the incline leading to a four-mile climb to Elliot's Knob. However, as much as muscles and tendons and ligaments had been challenged, the facial expressions were anything but difficult to discern. These people were suffering. So why not put an end to the suffering, get in a car, and go home?

These people continued because they understood that suffering isn't all bad. There is an inevitable element of suffering as an athlete strives to reach new heights. The line between pain and gain must be meticulously marked and measured. But in the end, holding onto the hope of accomplishment and persevering through the hurt results in increased strength, maturity, and restoration.

We can read what Peter wrote to the first century church. He recognized both the necessity--and result--of suffering. He says, "In all this you greatly rejoice, though now for a little while you may have had to suffer grief in all kinds of trials. These have come so that the proven genuineness of your faith—of greater worth than gold, which perishes even though refined by fire—may result in praise, glory and honor when Jesus Christ is revealed.  Though you have not seen him, you love him; and even though you do not see him now, you believe in him and are filled with an inexpressible and glorious joy, for you are receiving the end result of your faith, the salvation of your souls." (1 Peter 1:6-9)

He goes on to say this: "For it is better, if it is God’s will, to suffer for doing good than for doing evil.  For Christ also suffered once for sins, the righteous for the unrighteous, to bring you to God. He was put to death in the body but made alive in the Spirit." (1 Peter 3:17, 18)

"Therefore, since Christ suffered in his body, arm yourselves also with the same attitude. . . (1 Peter 4:1). Why? Because of this: God's grace.

"And the God of all grace, who called you to his eternal glory in Christ, after you have suffered a little while, will himself restore you and make you strong, firm and steadfast. To him be the power for ever and ever. Amen." (1 Peter 5:10-11). 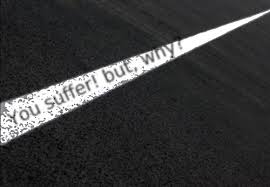 Sure. Suffering hurts. Suffering is never nice. But persevering through the pain will restore us to be strong, firm, and steadfast.

Bring it on. I think I want to suffer.

POSTSCRIPT: Congratulations to all the finishers of the 2015 Grindstone 100. Well done!