Life, Death, and the Hiding Place 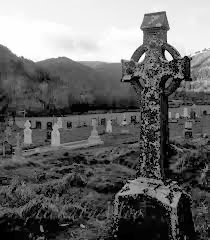 These phrases roll off the tongue like water off a duck's back. We either use them without thinking or use them thinking they might inspire. It's not that they are not true and worthy sayings. It's just that their overuse lessens their impact.

In the last two weeks, an equal number of young people in our circle of friends have died; Kristie Kitts and Peter Thorton. Kristie, a bright and promising nursing student was on her way to work early one Sunday morning when the car hit a patch of icy road. Her car careened over the embankment, Kristie thrown about like a ragdoll. She did not survive the impact.

Peter, an effervescent young man, was chatting with a friend out on the balcony of the house. The railing gave way, both friends plummeting to the ground. Peter's fall was fatal.

Both Kristie and Peter spent time with our family. Kristie often came to visit and share a meal when her boyfriend was living with us. Peter was our neighbor when we lived up in the Boonsboro area. Seth, our son, and Peter must have been cut out of the same mold: fearless with a side of reckless. They did what most boys do, but even more so. They rode dirt bikes, adventured in the woods, raced lawn movers and go-carts up and down the driveway, spent hours twilight sledding down the big hill whenever snow fell, cut trails through the woods, and wiled away the time down by the lake. Those were good days.

I sat beside Seth at Peter's memorial service yesterday. The grim reality of the gathering was palpable. The church was packed in support of the family, the only remaining seats in the choir loft. Gary and I, along with Seth and Claire (his girlfriend) walked the center isle of the sanctuary, climbing the stairs to our seats. Once seated, I took in the beauty of the church, massive, interlocking timbers sculpted into place. I noted the uniquely arched doorway at the back of the room, thinking how it could beautifully frame a wedding couple. The sanctuary's shape was that of a "t". Or perhaps the layout was intended to be a symbolic cross, so appropriate for its function.

As I scanned the solemn faces in the pews, I wondered about each one's connections to Peter. I assumed the older set were friends of Danny and Melissa, Peter's parents. One section, in the alcove to my left, sat young people in their twenties, undoubtedly friends of Peter's. I spotted some of our Fair Oaks Lane neighbors who still lived on that quiet, private road along with the Thortons. "It will be nice to chat and catch up later on," I silently mused.

The man at the organ, just an arm-length from me, played through the hymns he had chosen; beautiful, old hymns. The lyrics resounded in my head, reminding me of so many truths. I felt sad that so many of the younger folks, in all probability, had little knowledge of the truth in song. I wished that all could soak in the richness of those hymns beyond the melody and harmony of the notes.

Gary sat on my left, Seth beside me on my right and Claire beside him. As we waited for the family to enter the sanctuary, Seth's sadness leaked out and ran down his cheeks. I handed him a tissue, keeping one for myself while wishing I had worn waterproof mascara. I rubbed his back to console, thankful  my son was alive and by my side. The wound of death was fresh. Peter had stopped by to visit with Seth just a few days prior. I imagined their conversation was looping through his mind. Neither could have imagined their next visit would be so one-sided.

Death is brutal. There is no escaping that truth. Whether it was an "expected" death after a long illness or a sudden loss of life, death delivers a viscous, painful sting. The human emotions and sense of loss should never be belittled. They are real and powerful. For years after my father died, I still imagined he might walk through the door when visiting my mother. There were things I wanted to tell him, only to remember I couldn't. Perhaps that's why I always direct my feet toward the cemetery on my first run back in my home town. I know he's not there but still, I "talk" with him as I stand next to the grave marker that reads "Only a sinner saved by grace." (From "The Legacy")

Despite the angst, the loneliness, the deep ache that penetrates every cell in the body, we must chose to trust when we cannot see. We must run to the hiding place in the shadow of the Almighty's wing. God is faithful.