"Pace Yourself" in the hands of Sarah Palin 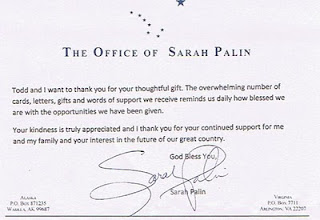 Yes. . .I sure did. I sent Gov. Palin a copy of my book. Though I can't imagine how much mail she gets, I sent it anyway. Why not? Other than the fact that she is a key conservative figure in today's political scene, past governor of Alaska and vice-presidential candidate, she seems "normal" enough to relate the "normal" stories found in the book.

I figured she or her girls might enjoy it. Like a dork, I even sent it with a tracking number so I could trace it's journey. How corny is that, right?  I wrote her a letter and signed the book with hopes that it would end up in her hands. It did. Though the note I received back from her is standard, the signature is real. How cool is that?
at January 22, 2011 7 comments: 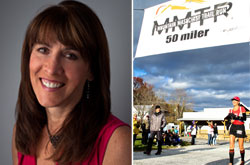 The public relations department at Cedarville University recently published an on-line article about yours truly. I graduated from Cedarville back when it was a college in 1978. It's a great school with strong academics, a beautiful campus, and a sound Biblical foundation.

Check it out at http://www.cedarville.edu/Offices/Public-Relations/CampusNews/2011/Extreme-Devotion.aspx
at January 21, 2011 2 comments: 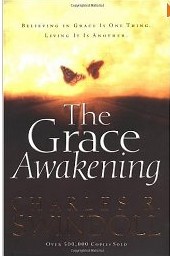 I am in the middle of a great read; The Grace Awakening by Chuck Swindol. It is so relevant with some of the present circumstances and people that are currently in my life. I recognize times in my own life (including a few instances as of late) where I am guilty of being a grace killer rather than a grace giver.

In short, a grace killer is one who inflicts his personal decisions onto other people, creating a long list of does and don'ts and measuring spirituality by the level of compliance. We are not talking about black and white biblical directives. Those are non-negotiable. What we are talking about are things of conscience. For example, having grown up in legalistic churches, it was pounded into me that to go to movies, play cards, dance, drink alcohol, etc, brought great displeasure to God and were, in essence, sinful. No further discussion needed. The focus was on what not to do. I John 1:9 ("If we confess our sins He is faithful and just and will forgive us our sins and purify us from all unrighteousness") hung like a ready bandaid around our necks for we were told that we would need to confess our sure-to-happen transgressions 24/7.

On the other hand, one who lives by grace understands Romans 6. There is nothing that justified us to the Father other than grace. We did not contribute one iota to the process. We were as dead as the proverbial doorknob. Nor can we add to the grace that was extended to us, earning brownie points to gain higher spiritual marks. We have been freed from the bondage of the sin master. We have been given the ability to concentrate on living a life not focused on "my sin, my shame, my failure," but rather on "His forgiveness, His grace, His life." That makes all the difference in the world. Our faces transform from sad and disparaging "no" faces to glowing and cheerful "yes" faces.

Swindol offers this analogy. There is a long and twisting mountain road with dangerous curves and sheer dropoffs. The state has two options. They could build emergency clinics at the bottom of the cliffs to tend to those who fail to negotiate the curves. Or, they could place warning signs on the road to instruct the motorists to slow down and use caution. Swindol points out that while the clinic at the bottom of the cliff is useful at times, it would have been better to avoid going over the edge in the first place. He equates the clinic to I John 1:9, a sometimes necessary restorative option but one that can, for the most part, be reserved for emergency situations. But, the signs along the road are more like Romans 6. Isn't it better to live positively in righteousness than to constantly call for first aid from the clinic?

This is not to imply that confessing our sins and being restored and forgiven is not important. Indeed it is. But we must begin to realize that God has saved us so that sin no longer is master (Romans 6:13-14). Waking up in the morning to realize that we are empowered by His grace to live righteously is far better than grimly assuming that we are destined to blow it.

It's all about grace. Grace that we have been given and the grace that we extend to others to live righteously and according to conscience.
at January 14, 2011 9 comments:

Back in the day, say second grade or so, school was a fun place to be. We got to color, go to music class, make projects, have recess, and write our math problems with pencils sharpened to a dangerous, arrow-like point. At lunch time, we filed down to the multi-purpose room, a cavernous room (or so it seemed at the time) that doubled as the gym and the stage. There always seemed to be an odd combination of scrambled odors. Perhaps it was a mixture of smooshed PB&J sandwiches, those yucky green peas the cafeteria workers doled out, and the smell of sweaty children after recess. But, bells and buzzers, announcements over the PA system, and select kids proudly wearing their Safety Patrol sash and badges all made the school a mostly wonderful place to be.

That was the 60's, an era that saw the girls wearing dresses and the boys collared shirts. No jeans. No t-shirts. We said the Pledge of Allegiance every morning and had a time of prayer. And, we had health exams. Notably, a dentist would come check everyone's teeth and the school nurse performed eye exams. Quite often, I noted, a classmate would be sent for a referral for an eye check up. I knew that because they would return to school with those big, dark and disposable sunglasses. I was seriously jealous. I wanted to wear glasses and I knew that was a part of the process.

In fact, so jealous was I that the next time a school eye screening came around, I purposely flunked the exam. I knew it was the only way I would ever have a chance of donning those spectacles. So, when asked, I couldn't tell the difference between one letter and the next. It baffles me that the nurse didn't catch on but I considered myself successful when I walked out with that note to take home to my parents. I had miserably failed the eye test and they were to take me to the doctor. Yippee!

I guess I let my guard down because the doctor could not be fooled. The only thing I got out of that visit was a lecture about how much it cost. And, the only glasses to hang from my ears were the wimpy disposable ones which, by now, had lost their appeal.

Just this morning I went again to the eye doctor. (Not the same one. He's probably long dead.) I didn't even need to carry a note from the school nurse. But this time, I wasn't faking not being able to read all those letters. "Is it better with number 1 or number 2?" he asked over and over again. It was all so confusing. Sometimes the view through those googley-woogley lenses was just a big, blurry mess. But with a few clicks of the knob, the doctor was able to clear things up. I walked out of there with the same big, dark and disposable sunglasses--and a prescription for progressive lenses. I get to wear glasses after all.

I'm really not surprised that my eyesight is no longer perfect. It happens with age. First, we lose focus on  the small things. It's annoying at the beginning but seriously aggravating when we can't read a price tag or a recipe. But, at least I can still see far. Right?

Wrong. I am discovering that even my distance vision is getting a little askew. The only solution seems to be a pair of glasses that will correct for both maladies. Then, I should be good to go.

This process of becoming a presbyope did not happen overnight. It was a gradual process wherein I compensated for my inadequacies as long as possible. I didn't realize just how bad I was, however, until I looked through the proper, correcting lens. Then and only then could I see clearly.

I think we often view our surroundings without the aid of a correcting lens. Rather, we accommodate small variances and get used to the idea that blur is better. . .or at least okay. It's not until we open our eyes to gaze through the correcting lens of the Truth that we clearly see right from wrong, moral from immoral, good from evil.

There is no shame in wearing spiritual glasses.

But like every other 1/1, resolutions come fast and furious. Some are frivolous, others profound, all well-intentioned. Many will be abandoned before the calendar flips to 2/1/11, an obviously not-as-cool date. But they say, whoever that proverbial "they" may be, that it takes a month to establish a habit. So chances are, if you can make it to February, there's a better than average chance that you may have won the initial battle.

As the clock ticks away at this premier day, I am conflicted. Conflicted about what I want to accomplish this year. What races should I run? Should I seek an 8-5 job or keep doing whatever it is that I do now? How can I get myself in front of audiences in an effort to motivate and encourage? When should I start my next book? What should it be? And most pressing, should I commit to write again everyday as I did in 2008?

I hate making these decisions and I suppose I should get them nailed down before my head hits the pillow tonight. There is some relief in doing that. But, I also understand that once a decision is made, plans need to be implemented. I'm a pretty good planner but sometimes, I lack in the follow through. In that case, my decisions fall into the resolution failure category. I hate it when that happens.

I suppose you may expect me to reveal my decisions right now. Well, not tonight. I need to think on it awhile longer. Lists need to be written, pros and cons arranged. I shall have to weigh each one in terms of what I know about pleasing God and using any talents that He has given me. So, while you are not likely to lose any sleep over this, I'll let you know what I decide later. Happy New Year.


To humans belong the plans of the heart,
but from the LORD comes the proper answer of the tongue.
All a person’s ways seem pure to them,
but motives are weighed by the LORD.
Commit to the LORD whatever you do,
and he will establish your plans.(Proverbs 16:1-3)
at January 01, 2011 2 comments: