It wasn't in my plans for the week. But at 11:00 A.M. yesterday, I slipped into a pew near the back of the small sanctuary. I glanced to my left and, despite the circumstances, took delight in the fluffy flakes drifting down to earth. The tree-lined street and quaint older houses surrounding the church created a postcard-like effect. But as I turned my attention back to the matter at hand, the somberness of the situation became the new reality.

The family began to file in, taking their places in the front rows of the church as the pianist quietly played classic hymns. Among them, my son Seth, gently guided Claire, the love of his life, to their seats. It was in honor of her grandfather that all had gathered, "Shag," as he was lovingly dubbed for his dance-floor prowess, slipped from this life on Monday. Now it was time to remember.

I had only met Wellman Nash once. That was only two weeks prior. He didn't have a lot to say.
Rather, he sat quietly on the couch watching the mayhem that accompanies a large baby shower. Having suffered a stroke in prior months, I suspect he was a bit more restrained these days. Still, he seemed content and happy. Perhaps he was pleased to allow his energetic wife, "Bunnie," to display enough energy for both of them.

My attention turned back to the platform. A man was singing a Merle Haggard song, Silver Wings, accompanied only by the mesmerizing chords sounding from his guitar. Many of those in this mostly elderly audience knew the tune, silently mouthing the lyrics. Then the pastor, a younger fellow, stepped to the podium to read and comment from 1 Thessalonians. It's a perfect passage.

It was time to sing. I picked up my hymn book and started to turn to hymn #10. But I really didn't need the words to How Great Thou Art. I know them by heart. Rather, as I contributed the tenor line to the congregational choir, I thumbed through the hymnal and noted it had been donated by "The Happy Class." I smiled at the prospect. Music is such a wonderful gift.

And then a nephew walked to the platform, drawing a deep breath as if to summon the courage to address the mourners. He knew Shag well, recalling sweet stories that reflected his character: kindness, selflessness, a love for family and fellowship, and loyalty. From my vantage point in the second row from the back, many in the audience chuckled quietly or  bobbed their heads in affirmation. But even as a relative outsider, I was drawn in. "I wish I would have known him," I mused.

As he continued on, the focus turned from mere stories to the reason for his legacy; the power of the Gospel. That saving Gospel of Jesus Christ made the difference. It allowed him to emulate his Savior in the way he cared for others. He gave of himself because Jesus gave of Himself. He practiced kindness because that's what Jesus would do. As the speaker offered his closing remarks, I was beginning to understand. I was beginning to know this man.

I paid close attention to the rest of the service. I listened carefully to conversations at the grave site and back in the fellowship hall at the church. Amid fried chicken, mac and cheese, and homemade desserts, it was the same story. Shag's life was a reflection of his Savior. Shag's actions and attitudes simply demonstrated his well-placed faith.

I presume Shag was not perfect. None of us are. But I heard nary a conflicting report. No dissenters. No underlying, "But you didn't know him like I did."

At the end of the day, I was refreshed. My heart sang, encouraged that the powerful, life-changing Gospel was well-represented in Wellman "Shag" Nash. That is quite a legacy.


Postscript- My own father left a tremendous legacy as well. I wish my children could have known him.

Another year of masochism

It was Friday night. 9:57 p.m. The alarm on my phone reported "6 hours and 33 minutes until alarm." With that and a quick double check of my watch alarm, I tucked myself between the sheets in a spare bedroom of David and Nancy Horton. The plan was to sleep, rise at 4:30 a.m., meet Horton (who would already be up and out), and go run 50 + miles in the mountains. The goal: my 17th finish of the Mountain Masochist 50 Mile Trail Run.

I squeezed my eyes shut and waited for sleep to come. But it would not. My mind began making compounding lists of what needed to get done in the next two weeks. No matter how hard I tried to suppress those dart-like attacks into the synapses of my brain, the assault was relentless and overwhelming. In an odd way, I was sometimes amused at the randomness of what popped into my brain. But generally and not precluding what God can do despite my inadequacies, my brain registered only the potential demise of my newly-established (and beloved) ministry path should the events in the coming weeks fail.

I heard Horton get up at 3:15 a.m. and knew I had about an hour until my appointed time to face the day. When a whoozy-headed feeling finally came on shortly thereafter, my body fell into a light and short-lived sleep. "At least I've been horizontal for hours and nabbed 20 minutes of zzzz's. I can do this."

53ish miles is always a long way. But what can make it seem longer is starting the day in a cold rain. Though miserable weather was predicted, the 6:30 a.m. start was simply 30's and periodic drizzle. If you don't count the two calf-deep stream crossings in the early miles, I never felt wet.

I felt embraced by the dark as I became just one in a crowd of many. "No need to rush," I whispered to myself. Eavesdropping and amused by words of advice offered between runners (some of which was loony), I was content to slip through the forest in my own little world. Only briefly did I enjoy conversation with Sarah Quigg, one of the first runners I ever coached in my high school career. As the trail rose ahead, my young protege' pulled ahead as I yelled out to her, "Have a great day!"

I fell into a rhythm counting steps. 25 walk, 25 granny shuffle run. Repeat on all uphills. Run everything else. I felt it might be a safe approach. Training had been nearly non-existent since August. A tough coaching/work schedule with nearly every weekend occupied by cross country meets, I had managed but one mountain run of 17 miles, and two road runs of 18 and 15 miles. I hoped that the daily workouts I ran with my team added a little something to fitness.

The signs at each aid station told me I was gaining time on the 12-hour time limit. Continually catching people suggested my approach might actually be working. It was fun. Never before had I looked forward to "running" uphill. So with dark and drizzly turning to bright and sunny, the day held surprising promise.

Approaching the "halfway" point (26.9 miles, or so they say), the mountain we would climb was cloaked in dark clouds, sharp, stinging winds poised to pummel. Adjusting my 25 on/25 off approach due to uneven footing and the steep, 3-mile climb, I turned my focus to simply keep pace with fellow runners. My quads felt tired but forward motion was maintained. Hot broth at the aid station halfway up the mountain offered both warmth and needed salt.

About four miles later the infamous "Loop" needed to be conquered. The flat early miles flew by, but the rocky and steep incline slowed my pace. For the first time in a while I was the one being passed. Still, my spirit held strong and my legs allowed me to gain back precious ground on the downhills. Out of the loop and down the gravel road, I drew closer to my goal with every step. 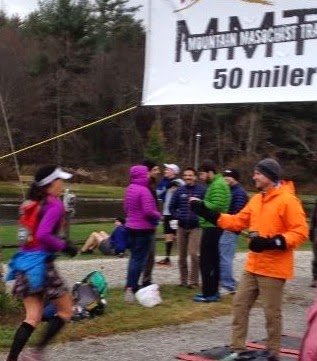 Despite two tortuous climbs in the last eight miles, the section preceding the last aid station seemed shorter than normal. Perhaps it was the chance to chat with runners as we played hop-scotch along the wooded trail. But when that final station came into view, not even the welcoming tents and snap-crackling campfire held enough allure to dissuade me from running by. The silent tick-tock of my watch whispered I might be able to break eleven hours, something I felt impossible in recent years. The changed course and my creeping-up age made all my sub-9s and 10s of long ago seem far away in Fantasyland. But it was what it was and left nothing but down, down, down and off the last mountain.

Then I saw her. Sarah. I was surprised after watching her slip away in the darkness of the first hour. My emotions flipped between joy in catching her and the college runner's disappointment that I did. As the orange-painted "1 mile to go" mark passed beneath our feet, we were side by side. "Hi, Sarah."

"Oh, Coach T," she uttered with a wistful quiver in her voice.

"Come on, Sarah. Let's finish this together."

But it didn't happen. I glanced at my watch. I had time to sneak in under 11 hours if I continued the assault. I pulled away, feeling strong and cajoling her to catch up. It wasn't in the cards. We would not cross the line together. Her dad was standing along side the road. I glanced back to see the pair amble along. The only thing left for me was to make the mental decision to persist all the way to the line. 10:57. Sarah crossed a minute later. The coach and athlete. Together again but never really apart.

To eternity and beyond

A daughter's perspective on her mother's journey home August 6: The text The text from Brooke, my niece, was waiting for me w...