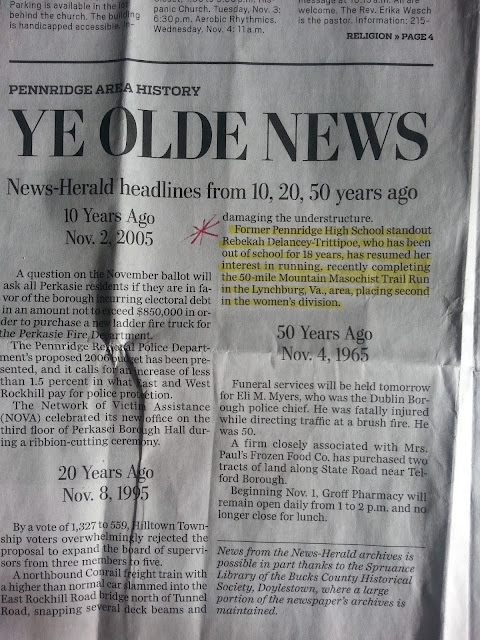 I tore open the envelope from my dear Mother. She loves the mail and has always kept rolls of stamps and stacks of envelopes at the ready. Sometimes it's an encouraging note or a particularly interesting article she discovered. But this time it was a newpaper article from my home town paper. The NewHerald has always had a knack for proclaiming the news, big and small, in and around Perkasie, Pennsylvania, a small hamlet 40-some miles north of Philly.

One popular feature is "Ye Olde News," printing recaps of what made headlines 10, 20, and even 50 years ago. Imagine her surprise (and mine as well), as an article dated November 8, 1995 described my first Mountain Masochist Trail Run. I came in second behind ultrastar Janice Anderson in my inaugural attempt at the 50-mile distance. But that was then. This is now.

Yesterday I completed my 18th MMTR. The course has changed over the years as well as the faces. The age of most ultrarunners back in the day was probably north of 35. I was 38 in 1995 and was one of the young ones. But not anymore. There are multitudes of college students and 20-somethings. Runners in their 30's have been at it for ten or more years. But are they fast? Yep. Or maybe it's that I am so much slower.

My time this weekend was about two hours slower than in 1995. But it was 3 hours slower than the fastest time I ever ran. Yikes. I could take a really long nap in that amount of time. Or maybe I could get four loads of wash and clean the house in those two or three hours. A lot has changed. Back then I was racing hard, my crew zipping me through aid stations and giving me updates on the nearest competitors. Now I run to finish. Now I run as a "TrailMama" to five college girls in their inaugural 50-miler.

Our unlikely group enjoys being together. Night runs, pizza making, clothes swapping, watching episodes of "Fixer-Upper," and training trips to the mountains knit us together. It started out with a coach-athlete relationship when they were in high school and I was their leader. But time went by, they grew up, and a love for the siren song of the woodland drew us together.

From the starting line, we ran into the darkness punctuated only by runners' headlamps. We were a cohesive group, chatting easily, and taking great joy in proclaiming "Girl train coming through on your left" as we flew by slower moving runners on a downhill portion. Sometime later, Rebecca dropped back, slowed by a hip issue. Her sister Caroline ran on with us, deciding to unselfishly wait for her sister at the next aid station. They ended up withdrawing from the race when the pain would not abate and time cutoffs became the enemy.

Prior to the race we had discussed the wisdom of pact-making to stay together. Experiencing the journey as one group held promise of life-time memory making. On the other hand, one can never predict a bad patch or alternatively, feeling gloriously strong and swift. Staying together come whatever could result in no one finishing. Having two comrades exit the fray, the goal had to become getting everyone else to the finish line. But in doing so, each individual needed to run their own race.

For many miles we ran in concert, sometimes chatty and other times lost in our private thoughts. On the unseasonably warm and humid day, I struggled with cramping for about 25 miles. The result was an inability to push hard and run aggressively. Drinking copious amounts of electrolyte drink, salty broth, and munching on pretzels eventually eased the seizing muscles. At one point Nicole took advantage of feeling good and pulled ahead on the trek up the mountain. I followed, catching her again in about five miles. Abby and Kendal caught up by mile 41.

But gone was the happy-go-lucky approach. We were all pushing the cut-off times, left to run the remaining miles under great distress. To come this far and not complete the race within the required time would be devastating. Nicole voiced the pressure. "Coach T. Can you tell me a story to distract me. This is not fun anymore. I'm at my emotional end."

Abby surged, the catecholamine rush sending her into overdrive. Nicole and Kendal fell in behind me as we rushed down the trail and up the next steep hill. But Kendal fell further behind as we pushed onward. We worried about her but at this point, we all had responsibility to get ourselves to the finish. With desperate prayers for any muscle cramping to be held at bay, Nic and I drove on, flying past the last aid station. After the umpteenth time calculation to confirm our status, it became clear we would make it by a decent margin. Still, the 3.8 miles to the finish was taking its toll. Glancing backwards, there was still no sign of Kendal. I prayed she not lose hope.

Kendal's parents were waiting at the last turn. "Where is she?"

"Back there. She can still make it. Tell her to hang on!"

A few minutes later, we crossed the finish line with 15 minutes to spare. Abby had finished a few minutes earlier. Nicole sobbed out of exhaustion on her Dad's shoulder. I turned to pick up my finisher's shirt, and then heard the loud proclamation. "And now finishing, Kendal Ryle!"

Kendal had faltered on the climbs but spurred on by the deep desire of a timely finish, did not give up hope. Rather, she accepted the inevitable agony that comes with the quad-crushing 3-mile assault off the mountain. I breathed a sigh of relief before hugging her neck. Three of my charges did it. They conquered their first 50-miler.

Two decades ago and for many years after that, I pulled in numerous top finishes. In fact, there were times when it was unfathomable to me not being a top runner. But now, I run my slowest times ever. Now, I am not even winning my age-group division. Now, those fast times and top billings are such a distant memory that sometimes I wonder if they ever really happened.

But guess what? Now I win every time the Shindigglers and I are together. Now I win to see and feel their joy of mountain adventure. Now I win when I see their heart for God and others. Now I win when they complete what they first thought impossible. Now I win simply by being their TrailMama.