Decisions. It was all about decisions.

As the bus pulled out of the parking lot, carrying our track team to the state meet, I wanted a few moments to chat with the busload of young and excited athletes. Not just my distance runners but sprinters and field event contestants alike. On the last day of practice, Cody, a team leader, mentioned how motivating it was to have seen the initials "TBD" beside a listing of championships won by various school teams during this year. "To be decided," he explained, "means that we all need to decide right now that we will win the honor." He was right. Now it was my turn to talk about what it meant to decide.


To the exact day and three years prior I had written a piece entitled "Decisions." I scribed, ". . .The point to remember is that we must choose to extend ourselves and then commit to do it even when it is scary, intimidating, or painful. But we must also realize that doing this in our own power will likely fail. Thankfully, God has promised to fully equip us for each task. . . Set goals that will push you beyond your own limits and into God’s limitless realm." (Pace Yourself: 366 Devotions From the Daily Grind, May 20)
As I read the story aloud, the mood was somber, anticipating what may lay ahead. I continued. "You need to embrace the fear. Go deep inside to a place where you have never been, never explored. For it is only there  you will optimize the talent God has given you." I concentrated hard not to cry, nearly overcome at the prospect each of the young athletes faced. Would they go to that place? Would they push the line further, hurt a little harder, feel the pure satisfaction of a 100% commitment? Few athletes really know what that means. Only a handful have experienced that rare encounter with the impossible becoming possible. But I never anticipated what the day would bring.

One after another, my distance runners stepped onto the track to race and stepped off the track with honor. Personal records fell like rain. "I've never felt that way before," senior Cristen gushed. "It was as if I was watching myself run, lap after lap. I didn't want to stop." I watched them pick off runners in front of them on the back stretch, tucking in before the curve. They ran fast and smart, crossing the line and running into their personal record books while scoring points for the team.

Late in the day and with few races left, Trey took to the start line of the 3200 meter run. This junior, full of potential and an insatiable desire to improve, had his eyes set on breaking the magic ten minute mark, just narrowly eclipsed by three short seconds in prior races. He had practiced well, running ever more smoothly, efficiently and faster with each and every day. I could feel it. Today was his day.

The gun sounded and the pack in this top heat started off. Trey was toward the back as he settled into the quick pace. On each back stretch, a lonely piece of real estate, I coached from behind the fence, encouraging him to pick off another runner. I hit the lap button on my watch each time I saw him pass the start line. After half the distance, he was a full three seconds faster than his race goal which is no easy matter. Lap 5, 6, and 7 saw the young, talented runner move up into fourth place. He had this. My own excitement grew with each fluid stride. He passed by for the 8th and final time, quickly gaining on the runner now in third place. The pace was furious and intense. Every muscle, every cell, was fully engaged, his focus piercing. Now, I ran in the opposite direction on the outside of fenced oval to meet him at the finish. He was running the perfect race. The end was sure to be joyous.

A battle ensued down the homestretch of this grueling two-mile run. Neck and neck, shoulder to shoulder, Trey and the third place runner contested the race. Trey pulled ahead, closing in on the finish line. He gained several yards on the other runner, transiently capturing the third spot. But then, he stumbled and my heart went into my throat. Ever so briefly, he straightened, only to have his legs come out from under him. Down he went, hard. The crowd gasped. "Nooooo. . ." I remember yelling to no one in particular. I fought my way through the spectators, trying to get to him. "Out of my way," I screamed. "That's my runner!" Trey struggled to stand but could not. Now, just 10 yards from the finish, he flailed on the track as the runner behind him passed by. Somehow, someway, he found the line as he crawled forward. Then, he collapsed in a molten heap. The time was 10:03. The crowd, watching in suspense, hushed.

Arriving in the next moment, Trey was heaving, trying desperately to find his breath. His face was white, lips blue. He writhed on the ground in agony, his eyes seeming wild and scared. "I was so close. So close," he whispered.

A crowd of other coaches gathered as we turned him onto his back, legs elevated. I knelt beside him, now more of a mother than a coach. "Trey, try to slow your breathing," I softly advised. Hyperventilating was not helping his condition. He looked at me, his eyes communicating deeply, and did as I asked. We perfectly understood each other. He had run deep and long. He had gone to that place where few dare venture. I was glad my own eyes were hidden behind sunglasses. I felt them well with tears of joy and respect as I witnessed this runner push to and beyond his limit with courage and honor.

It was a slow progression to get Trey upright. Gone were the muscle glycogen stores, gone was any reserve. Slowly, the blue tinge around his lips was replaced with pale color in his face. He looked drained, completely empty. The crowd rose in a thunderous ovation when this runner finally took to his feet. I held onto the young man as he began with faltering steps, making our way back toward our team tent. The lengthy applause continued, and rightly so.

Trey is a warrior. A warrior who had entered the battle prepared to act on his decision to achieve a big, bodacious, bold goal. It was his decision to reach deep inside and explore the depths of his soul, the depth of his commitment. He had chosen to ignore the pain, the agony of oxygen-depleted muscles and heaving lungs, to go beyond and into the abyss.

Trey ran a perfect race...including the ending. No other race will be remembered as well, no other athlete respected so fully. On his arm was written a scripture verse but his honor, dignity, and courage clearly confirmed that testimony and strength of will. It was his God who enabled him to venture into the darkness and return to the light.

Thank you, Trey, for an object lesson of enormous magnitude. It will be forever remembered and has sealed my continued commitment and privilege to coach. I wouldn't ever want to miss something like this.
at May 22, 2011 4 comments:

Oh my goodness. It's been nearly a month since I have written anything here. Not because I haven't thought about it, planned or started to. I feel bad. Writing is cathartic and a means to contemplate life. Most of the time, it puts things in perspective for me. I have yearned to peck away at the keys but the speed of life has had me whirling about at dizzying velocity.

Four or five weeks ago, I received a call from a school administrator asking me to sub the next week. Sure. Then he called back. "Could you actually teach Biology, Chemistry, and Geometry for the rest of the year." I nearly fell over as I waited in a check-out line at Wal-Mart. The rest, they say, is history. Now the routine is up at 5 a.m., to school by 6, study, prepare, and teach till 11:15, study more, go to track practice, get home at 6 p.m., make dinner, take care of my 100 online students and prepare more for the next day. Sandwiched in there are weekend track meets, on-going projects to put in a fish pond and finish a big remodel while getting a group of girls ready for a mission trip. I am tired. No. Exhausted. Sleep is not overrated.

However, for weeks, I have been awakened in the night by my thoughts, apparently worming their way to the surface of my restless brain. For example, during the planning period and anticipation of moving the first shovelful of dirt for my pond, I could think of little else. I was so excited! I love doing things like this. The labor, the rocks, the dirt, the mud, the water...all of it. Can't get enough! But, even I was amazed at how pervasive my thoughts about the pond became. I found that I drifted to sleep scheming my attack and upon waking, never missed a second of continued planning. Then, I remembered the deer. 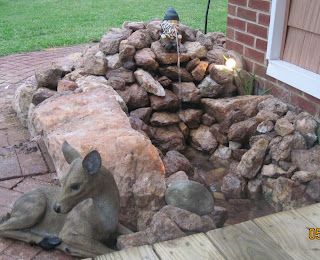 The deer is almost a joke. Another family hated that resin creature. Not sure why. He's really quite cute. Nevertheless, at a swap meet of "stuff," my friend was delighted to let Bambi go home with me. Since then, I've loved the way the little guy is molded to lay there in my garden, so blissfully content. Perhaps it reminds me of the cement deer that my Grandma had in her yard which later came to live at our house. Good memories. Good times.

The deer had found a place of rest near the spot where my pond was going. Obviously, he had to relocate for awhile. I have to admit that I ignored him for some time during the construction process. But as I was putting the final touches on the pond, placing rocks around the perimeter and lining the bottom, I absentmindedly picked him up, setting him down by a big rock bordering the pathway. The gentle sound of flowing water at his side seemed so right. Hum, I thought, he looks content there. Perhaps I'll leave him be.

So he remains. He remains not because he is a charming garden ornament or a conversation starter as guests meander by. No, he has found a new home because every time I come or go from the house, he reminds me how I should live. How my thoughts should be guided. How my priorities should be determined and structured. For as silent as he is, his message speaks loudly, chiding and convicting.