When life comes crashing down

I glanced up just in time to contemplate what was about to happen. In the next nanosecond, my body felt like it had exploded when the 500 pounds of hardened steel crashed down on me. The pain was searing. I could not breath. I heard myself let out a guttural scream from within while I thought to myself, "Give it a second. You'll be alright."

But I wasn't alright. In a freak accident, the spotting rig of a trampoline used by the divers 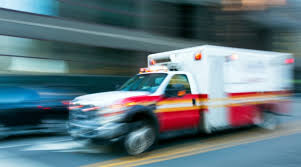 unexpectedly crashed in the process of taking it down. I don't have clear recall about the ensuing moments, but the pain in my shoulder and back will be forever unforgettable. My vision was cloudy and voices seemed very far away. I was in a haze but curiously fascinated by the ever-expanding pool of bright red blood a foot away from me. Though my forearm was bleeding from a three-inch gash (a fact I was unaware of at the moment), I was confused by the steady red drip. Someone said it was coming from the head of the assistant dive coach. I remember wondering if he was still alive. (John did survive the glancing blow to his head, requiring but three stitches to seal the wound.)

Slouched on the floor with back now against the wall, I continued to come and go from reality. Someone was trying to butterfly together the wound on my arm. When I heard another say that EMS was on their way, my mind protested because I had planned to get in a lengthy trail run in the rare and warm sunshine. But alas, that was not going to happen. The pain in my left shoulder, forearm, and right rear flank gave my mind permission to concede defeat. My immediate future necessarily required transport to the hospital in the back of an ambulance.

Wheeled from the natatorium on a gurney and loaded through the back doors of the emergency vehicle, I began to spontaneously shiver, perhaps from the pain, perhaps from the shock of it all. Assessment of my status continued and IVs were started. For the most part, I squeezed my eyes shut tight, trying to get to that place deep inside where I could get a handle on the course of events. I began to settle in, although the substantial hit of morphine likely helped in that process. 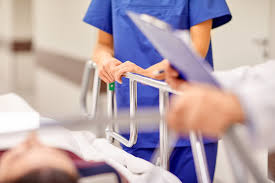 There was something about being rolled through the hospital hallways that was disconcerting. I could only see the ceiling tiles wiz by, my head being held in position by a cervical collar. I didn't particularly like the whole scenario. It bordered on embarrassing. But soon enough, I was settled into an emergency department bay, hooked up to monitors and awaited the next steps.

Waiting with me was Chelsea, one of the swim coaches. I appreciated her willingness to take that ambulance ride with me and chat while we awaited the arrival of Gary, my husband. X-rays, CT scans and other assessments followed, along with more morphine. My laceration was closed, and news of a fractured shoulder delivered. I was released hours later to go home. Despite nausea and dizziness thwarting my effort to get out of the wheelchair and into the car, the journey home and into this new normal began.

A visit to orthopedics two days after the fact revealed not one, but three fractures; the distal clavicle and two fractures in the scapula. Complete healing will be, I learned, a lengthy process. Therefore, the immediate challenge was to figure out how to complete the simplest of tasks, such as securing my ponytail or tying my shoes.

It's been a week since the accident. Each day gets a little better and I am finding I can walk fast without much pain. In fact, it's possible I may occasionally break into a slow run test while holding my slinged arm tight. It's actually not too bad, and that is encouraging. Of course, lifting my arm is difficult and getting out of the deep claw-footed bathtub using just one arm is a problem yet to be solved. Dressing and undressing is also a challenge. Still, I can't be too upset. I am fully alive.

Had my head been two inches to the left, there is little doubt that February 19 would have been my last day on earth. I am not trying to be melodramatic or overstate the case. But it's the truth. A direct blow of 500 pounds to the head would not have been survivable.

Sometimes as I lay in bed, I see that rigging descend upon me. I cringe at the memory of the horrendous impact and the narrow margin between life and death. And then I think about the "what if's." What if the outcome would have been different? Would my last day have cemented a legacy of a life well-lived, or would it be left wanting? I will heal, I have no doubt. But if this unfortunate accident has any value (and it clearly does), then I will be thankful for the reminder that each sunrise should be greeted with gratitude. Each day should be lived intentionally, righteously, and with purpose. It's pretty simple, really. "What does the Lord require of you? To act justly and to love mercy, and to walk humbly with your God." (Micah 6:8)

Oh help me, God, to live this way every day!