A dam and two mountains 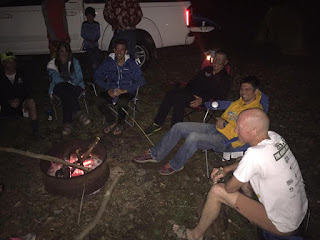 What is there about a campfire? Is it the smoke floating into the sky, twisting and turning along with the breeze? Or is it the snap, crackle, pop as the wood combusts before creating a smoldering layer of coals just perfect for marshmallow roasting? Perhaps it's the laughter and light-hearted conversation
of those who gather around. But on Friday night, I think it was all of that--and more.

It was the evening before the first rendition of the Dam 50K in Sandy Level, VA. After several years of bartering with Home Land Security and Appalachian Electric Power, permission was granted the YMCA race directors to begin and end the race at Smith Mountain Lake Dam. That's all David Horton, the experienced RD, needed to design a unique 50K curse. . . I mean course. None of us knew quite what to expect except to know the whole event would be "interesting."

And it was. From the hotdogs cooked over an open fire, to s'mores made with flaming Peeps and huge chocolate bars, the fellowship was great. Laughter and joking abounded, a few members of the fire circle being a bit more boisterous than others. For the most part, I listened in contented silence. I had only signed up for this race a few weeks prior. I had lacked focus in training but wanted to get in another race before. . .

Well, before my surgery. Back in January it was discovered I have a parotid gland tumor. It took weeks of tests, biopsies, and waiting to see various surgeons before a course of treatment was determined. In the meantime, without knowing what was coming when, it was hard to plan anything--training, which races to do, when to plan speaking engagements, and the like. But with a surgery date of April 18, the April 2nd race sounded like a pretty good idea. The April 30th Promise Land 50K, just 12 days post-op, may not fit into my surgeon's idea of "very light activity." I needed to race while the timing was good. 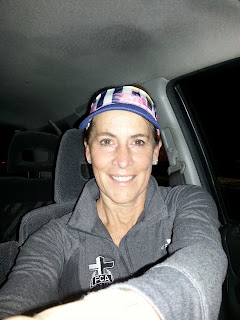 I had enjoyed some great long runs with friends while in God's appointed "waiting room." But to say I was training without distraction would be dishonest. Sitting in the car before the start, I had no idea how I would fare throughout the day. Still, I was relaxed and maybe even a little hopeful.

The course started off with a bang; a steep road up above the dam with a turn onto even steeper trail to take us to the mountain top. But the reward of a winding downhill run on smooth gravel into the first aid station make the effort worthwhile. I fell into step with fellow local runner, Gratten Garbee, and caught up on things as the miles, now run on hard surface but desolate country roads, ticked away. We leap-frogged with another local, Michael Mitchell. There was no pressure. Just keep running according to how each of us felt. I eventually pulled away as both developed some uncooperative body part issues. I enjoyed the solitude, my cadence accompanied only by the swish-swoosh of the fluid in my hydration pack.

Coming into the 21-mile mark back at the start/finish by the dam, my steady pace allowed me to pass a number of folks along the way. But after a quick re-fill at the aid station table, the "Death Climb" was next on the agenda. Seven crossings of the same meandering stream preceded the 1500 foot vertical assent, all in about a mile. Energy-wise, all was fine. But with the steepness of the grade, the required sharp ankle angle, and 21miles already on my legs, my calves protested greatly. In fact, they turned into quivering masses of muscle, threatening to halt my progress with their rock-hard status. Glancing at my watch, I couldn't believe how long this nasty climb was taking. No previous climb in all my ultra days rivaled this one. Apparently, I wasn't alone in wanting to stand atop this mountain that overlooked the wide expanse of lake below. Tales of vain (and perhaps profane) utterings, plopping down to take breaks, and holding onto trees to prevent a backwards, downhill tumble filtered among the runners in the aftermath.

The aid station on mountain high was a welcomed sight! I needed to get serious about correcting the electrolyte issues that contributed to the cramping. But it would take time to feel the effects. Brief jogs morphed into walk periods until the calves released. Then off again I ran, repeating many times while going up and over four more peaks perched along this ridge line. By the time a long descent was required to get off the mountain, I was running steadily, having to walk a few steps only when calves shouted their dislike for a stride that was too long or pace too aggressive.

Approaching the last aid station, I mused on how quickly the day had gone. I was thankful for the smile I was able to maintain throughout the last six hours. I was pleased to have enjoyed both solitude and relaxed conversation. I was delighted that aid station workers had voted my outfit as the cutest of the day. Now, a mere three miles remained. Though not pleasant to run more roads, I was grateful that this road led home. 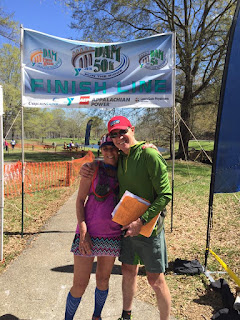 I was the fourth woman to cross the line. I was okay. It looked like I was about 20 years older than the other women. It took me 6:27 to complete the course without suffering all that much. I made some new friends, and got reacquainted with old ones. Having finished the first edition of the race gives me the option of doing the second, and the third, and the fourth. You get the idea.

Necessarily, for a dam to hold up against the powerful force of water, two mountains standing tall on both sides are required. It can be a fight, a struggle, to build that dam and harness the power pushing against its walls. But just climb the mountains on either side to appreciate the integrity, beauty and purpose of the structure.

I'm not sure what will happen on and after April 18. But that's okay. I am safe on the mountain and tapped into the awesome power of the most High.


Postscript: For what it's worth, several days after the race I found out my surgery date has been moved to May 4. Now I can run Promise Land.