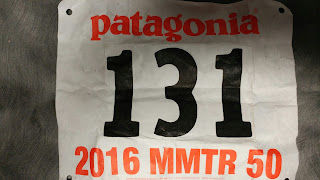 Nearly 300 runners gathered by the small lake, ready to begin the fifty-mile journey ahead. With headlamps casting beacons of light into the darkness, the mass of adventurers ventured off at the appointed time. They sauntered around the lake, up the hill, and onto the country road that would lead them to the trailhead. I was part of that crowd, seeking to complete my 19th official journey along the entirety of the course.

I was chatting with a group of friends that complete this race as a social event. Each could run much faster than they do, but they enjoy the simple pleasure of getting from point A to point B with smiles on their faces and not much impact to their bodies. Andrew Thompson was one of the gang, a former record holder on the Appalachian Trail. He, too, was en route to his 19th passage of the Mountain Masochist 50 Mile Run through the Blue Ridge Mountains of Virginia.

We moved down the road spread from shoulder to shoulder. I was on the left most edge of the road when all of a sudden, I felt someone -- or something --come at me from the side. Busting from the woods at full speed, the buck bolted across the road, his hooves slipping on the hard road surface. His antlers narrowly missed my chest. Then it was a chain reaction, each runner to my right jumping to avoid the deer now sliding across the road. When he hit the far ditch, he fell to his knees before dashing off into the woods.

"What just happened?!?" Whoa. That was a close one, and it gave the pack of us something to talk about for the next few minutes. I wondered if the rest of the day would be so exciting.

Once into the woods, across the creek, and starting up the first mountain, I shared some time with an old friend. It was good to catch up. But alas, that was short lived as his pace was quicker than mine. I fell back into my routine of counting steps on the inclines: run 30, hike 30. Run 50, hike 50. I like doing this to keep making forward progress as quickly as possible. Silly, maybe, but it worked for me.

Despite the large number of runners in the race, I was alone for long stretches. Yes, there may have been runners further up the trail or coming around the corner behind me, but for the most part, the day was mine to enjoy in silence. Even when overtaking a runner (or they, me), it was mostly short pleasantries before we both retreated into our private worlds. The woods, playing host to filtered rays and brilliant leaves, thin ribbons of trail, and lazy country gravel roads, offered up the very best of autumn.

I was happy to be running a solid race. The aid station signs indicated I was well within cutoffs, albeit not with as much cushion as in the good times of yesteryear. Still, I was monitoring and managing myself based on the twenty-four years of ultrarunning. There was a certain sense of contentment to draw upon the experience of knowing what and when to eat, how much to drink, when to push a little harder, and when to settle in.

I will admit, however, that when my good friend Martha had passed me about fifteen miles in, my rhythm temporarily changed into the clunk-clunk of a flat tire. You see, though younger than me, Martha is in my age group and has bested me a number of times in the past years. Though not obsessed about it, I couldn't help but think that gaining back the title one last time before morphing into the Super Grand Masters (60+) come February would be fulfilling. So when I saw her come down from Mt. Pleasant as I was going up at about mile 35, I knew she had a good 20 - 25 minutes on me. I had a decision to make. Was I going to bide my time or attempt to run her down? 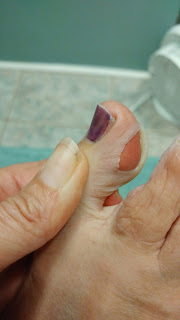 I was still running strong but not at a pace that was kamikaze. I told myself to stay steady because you never know how the other person is feeling. My legs were fine (other than what I knew to be a large blister on my  big toe) but I was getting tired of breathing. Really. There had been way too much breathing. My weenie upper body strength may have contributed to that feeling. But while I was contemplating my displeasure of doing the inhale/exhale routine countless more times, I suddenly ended up on the ground, which caused a calf to cramp in protest. Though surprised at the tumble on relatively smooth surface, it may have contributed to a later decision.

Miles 42 through 46 are marked by two vicious climbs an twisty-curvy single track. The fallen leaves kept the rocks and roots secret to the runner. Any sudden lurch upon discovering the hidden treasures had the possibility of ushering in a sequence of quivering muscles that could make things very difficult. And, should an ankle roll or wicked fall occur, it could be race ending. At least that's what I told myself.

Truth is, I know I was moving well. I was catching people rather than being caught. Still, I wasn't really suffering like I have in the past. I wasn't hating life. My blister was a bother but other than that, even the months-long nagging ITB issue had been a non-issue all day long. Yes, I was ready to reach the finish line--but at what cost?

Streaking past the last aid station, I remained steady. Not flashy. Just steady. I was playing it safe but ran on. I never gave up but never red-lined. Though I kept thinking I might look up to see Martha, I sort of hoped I didn't. That way, any compulsion to push into the super-suffer-zone could be more easily squelched. Even when the "1 mile to go" sign passed under my feet and a few gleeful runners slid by, I was still content to remain Steady-Eddy all the way through the finish.

I heard my name called as I ran under the banner, getting my congratulatory hug from race director, Clark Zealand. I was happy and relieved, but not overly emotional. It was just another necessary finish on the way to 20. My husband was there to surprise me. That touched me. A few photos were snapped before Martha approached. "You were only 16 minutes behind. You made up some time. But I have to thank you. I read your story of how you broke 11 hours a few years ago, and it gave me the idea. 'Why not me?' You inspired me to do what I've never been able to do before."

I was delighted for Martha. She is a strong competitor,  and a great friend. I watched her receive the cherished age-group prize later in the evening. It was okay. She faced her fear and grabbed the golden ring. I faced the fear and decided to walk the respectable pathway rather than the spectacular.

As a 41-year old, I ran my best at 8:57. I can remember thinking that I could run sub 9:30 in my sleep. That was dumb. In two months I'll turn 60. Long gone are the dreams of running those kind of times. But what is possible now? Surely, my priorities have changed. Time is not kind. But maybe, just maybe, new dreams can lead to new goals, and new goals can lead to new accomplishments.