So let's address the elephant in the room. I began my 12th Hellgate 100k+ (66.6) at one minute past midnight this morning, and just like that, I chose to quit after a predominantly 25-mile uphill jaunt under the dark, moonless sky. It wasn't like I missed a cutoff. There was nothing really wrong other than being turtle-like and having a few hamstring cramps. The temps were quite tolerable and wind minimal. I was dressed just right. I just decided I had lost interest in the entire affair. I contentedly quit. And to be honest, I felt little guilt or remorse.

After 25 years of ultrarunning, how did this happen? It was a novel phenomena in personal experience. For what its worth, the following are not excuses. They are simply the facts.

2018 was a rough year but it had its start in 2017. My father-in-law moved into our home in August, his health requiring increasing levels of care as the months progressed. In early November, I completed my 20th Mountain Masochist 50 Miler. A mysterious injury in the aftermath made running nearly impossible for six months, though not for lack of trying.

By the time summer hit, the schedule lightened with Dad Trittipoe's passing. Simultaneously, I was able to ease onto the long road back to the fitness I so desired. But each run was incredibly laborious, leaving me to wonder if my genetics was putting me at risk for an untimely demise. My father died just one year older than my 61 years following cardiac surgery. My mother also had been treated for heart disease. I sought out a stress echocardiogram to identify potential problems. When I passed the test without keeling over, I concluded that age and being out of shape combined with obnoxious heat and humidity had to be the explanation for my pitiful attempts at slogging.

With cooler fall temps, things improved. Mileage was still more than modest but I could tackle steady-state two mile uphill runs. The ill-defined knee/leg issue was manageable, though not perfect. I occasionally meandered along mountain trails in the 15 mile range, but never matched the single 20 mile summer slogfest.

Then Horton asked me to post Hellgate info on the website, including the following query: "Do you want to run the race?" Hum. In the last quarter century, I had never gone an entire year without racing. If I ran Hellgate, I reasoned, I could get at least one race in the 2018 books. So yes. I would run. I was hopeful that I could will my way through the course I knew so intimately. The celebration would be complete when my family boarded a plane Sunday morning, the dawn after such a hard effort, for a long awaited vacation. I was hoping to bask in the satisfaction of a race well run as I played in the resort pool with my granddaughter. 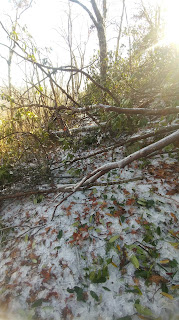 Little by little, I noticed modest improvement but was hesitant to test the leg. In total, I may have run four or five miles between then and race day.

With a compression knee sleeve under a beefier knee brace, I toed the line. Three Junior Shindigglers anticipated a night of crewing and adventure. As I started down the trail from the start, the leg felt okay and I ran appropriately comfortable. The last thing I wanted to do was set myself back by more non-running months in the future.

I felt I was moving okay on the long climb up to Petites Gap. Oddly, few lights pierced the darkness behind me while streams of lights glowed from above. It seemed odd and a bit disconcerting. I had never experienced this position in the back. And yet, my arrival at the Petites aid station was a scant three or four minutes faster than the calculated 18-hour runner.

My confidence was buoyed as I passed a few runners on the downhill. But alas, they pulled away on the next long uphill. Still, I felt I was making decent progress though no easy chatter or laughter as I had been accustomed to in prior years could be heard. I was alone. By the time I arrived at Camping Gap, the aid workers were cleaning up their tables. Only three runners were behind me. Reality was setting in.

My solitude was broken when a couple good friends came up from behind. We chatted together for about 45 minutes in the still darkness until they finally pulled away. Another runner from behind also passed me and disappeared in the distance. By my calculation, there were but one or two runners behind me. This was very strange. Was I really that pedestrian?

I continued to obsess about the impending snow storm predicted to hit in the wee hours of Sunday morning. Texts telling me about changing flights started to arrive Thursday. But with the race ahead of me, there was no realistic way to fly out Saturday night since a finish for me would make it a late return to home. I had actually contemplated withdrawing from the race all together on Friday morning to prioritize precious family time with husband, son, and granddaughter Addyson. But I did not. 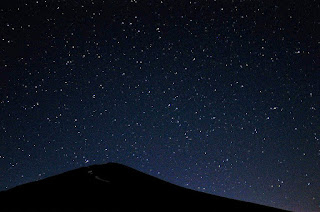 And then it hit me. I was not going to be able to fake finishing fitness. If I was honest, I never had a real commitment to this endeavor. Today's scant 25 miles were more than I had run at any one time since November of 2017. What I had was more like wishful thinking that the stars would align to grant me a race I did not deserve. I did not want to endure. I just wanted to go home relatively unscathed and see if we could catch a flight for the afternoon or evening, beating the storm and saving our vacation.

Arriving at Headformost Aid station ten or fifteen minutes before the hard cutoff, I informed them I was done. Other than a sore back and occasional hamstring cramps, I was tired but physically intact. I had told my friends to let my crew, waiting at the next aid station, know to head to Bearwallow, where I would be transported in the drop bag van. I was actually delighted to soon be heading home. I surprised myself at my lack of shame. For the first time, I understood that I am more than my sport. And sometimes, sport is not the end all.

There are about five minutes left for runners to be official finishers as I write. Bless their hearts for staying the course. Cudos to all.

Postscript (Sunday, Dec 9): We did not find a flight but it took hours and hours to rebook for Tuesday out of Roanoke. And, I actually do have some regret for pulling out on this day after as finisher pictures pop up on Facebook.