Just one more day: Jouney to Hellgate and beyond

I crossed Hellgate's finish line with a time of 16:14. Certainly not my worst time but not my best. Nevertheless, I had to be content. It was my ninth finish and an hour twenty faster than last year. But let's back-peddle those 66.6 miles and then some. That's where the story really begins.

2012 has been a year fraught with highs and lows, good and bad, goals set and dreams shattered. On New Year's Day I decided to run at least a mile everyday. Why? I don't know. It just seemed like a good idea at the time. Lots of friends had checked off 365-straight runs, I had read about others with streaks marked by decades instead of days, and I figured it would be easy to find at least ten minutes every day to get down the road and back. It actually wasn't too bad for the first seven months. Sure, there were late night jaunts before the clock struck the bewitching hour. But still, single mile days were rare and I didn't miss the total rest days as much as anticipated.

Then came summer and the Tour de Virginia, a 568-mile, 14-day quest on the Appalachian Trail. Well, make that 200 miles and five days. That's all I managed to do before bailing unceremoniously. I failed. Heavy sigh. But that's an entirely different story. Though I was up on my swollen and bruised feet giving aid to the runners still following that narrow ribbon of trail northward, I registered no miles of my own for two days. Still, I was back on track after that short hiatus, determining not to miss any more. 364 out of 366 (a Leap year) was still going to be pretty cool.

And then a job happened. I said yes to full-time teaching in addition to three-sports-a-year coaching. That's when it got really hard. Behind my desk by 5:45 a.m., teaching straight through the day with only one short break, conducting practices after school for several hours, and then home to cook, bath, work more on school, and fall into bed. The weekends didn't help much. Nearly every one was taken up by a cross country meet, sometimes requiring a dozen or more hours of commitment on a Saturday.

Call me a weanie but the last few months have taken a toll. Mental and physical exhaustion rule. Sometimes life got so frantic and my time with family so cheated, that even the idea of a ten-minute run seemed to throw my world off axis. So now, on this last day of the year, I have thirteen run-nut'n days for 2013. And no, at this point, I really don't care in these post-Hellgate, post-Christmas days. I've run out of steam.

But what about Hellgate? This was my tenth start in the ten year history of the race. I finished all but one year. (Yes, I risk breathlessness with yet another heavy sigh.) Last year was a thrash, finishing with just twenty-five minutes to spare. With my weekdays filled with teaching and weekends piled high with coaching obligations, I had but one fifty-mile race in November and one quasi-long run between that race and Hellgate.  My only hope was the daily running I do with my team and some heavy inspiration from a friend.

It came in the form of a simple text. "I hope the race this weekend goes well. Run valiantly! I just prayed for you."

Hum. Run valiantly? I like that word. Old Testament writers used it a dozen times, always characterizing brave soldiers. I especially like the phrase "accompanied by valiant men whose hearts God had touched" (1 Sam. 10:26). The idea of being courageous, cunning, and fully committed after an up-close-and personal with God appeals to me. There is purpose and hope thrown into the mix. I love that.

My goal for Hellgate then became to remember those words in the dark of night, when the going got tough, when I was feeling sleepy, and when I became impatient for the journey to be over. Over and over again I questioned myself. "Self, are you being valiant?" Sometimes the answer was yes. Sometimes no.

When it was "no," I asked another question. "Self, what are you going to change to become valiant?" The answer varied. At times it was simple. Run more, walk less. Other times it was more complicated. There were mental decisions to be made: smile, focus, don't pout, quit whining, don't think too far ahead, get only to the next aid station, be smarter about eating and drinking, try to encourage someone else, look around, enjoy the day, embrace the trail, accept the challenge. I found out that being valiant takes a lot of energy, mental and physical..

The race was hard; let there be no question about that. But the race wasn't as bad as it could have been. I didn't fall asleep as much as some years. Until the very end nothing really hurt, not even my feet. (Thank you, Hokas.) It looked like I was going to run a better time than last year and that was a major surprise. Yes, there were all the relentless in and outs, up and downs, the expected forever sections, and more leaves and rocks than should be allowed in the woods. My stomach only turned south toward the end but never prevented me from eating. Even the last three-mile climb to the Parkway crossing went better than anticipated.

It's been three weeks since the race. Physical recovery has been better than expected. What wasn't expected was a lethargy about running. Too many other tasks, responsibilities, and activities stole my attention. I had four straight days right around Christmas where I didn't run a step. There was no time or energy. My soldier-self came up on the short-side of restocking valiance.

As I look back on the year and my goal to run 366 days straight, I failed. I failed to run a baker's dozen of days. Am I crying about it? Not really. Sometimes, making good, mature decisions is knowing when the cost is greater than the reward. When that happens, it's time to pull the plug. So I did. I pulled the plug thirteen times because the cost to my family, my health, or my sanity wasn't worth it.

Will I try to streak again? Doubtful. Will I get up in the morning and run in the mountains with my friends? Yes. The reward is greater than the cost.

Happy New Year! Who knows what 2013 will bring?

Top Ten Clues That Your Impending Nuptials are in Trouble


We have this thing at our church. Whenever a young woman heads to the alter, the ladies of the church shower her with gifts and solid advice. Last night we gathered again. Several of the married lady offered Lindsay, the blushing bride-to-be, wonderful, biblical advise. By the time it got to me, there wasn't a lot more I could add. So I didn't. I took a little different approach. I decided to give a light-hearted "what not to do" list. So, here goes. . .


Top Ten Clues That Your Impending Nuptials are in Trouble

10. Your favorite song has always been, is now, and will forever be, “Let’s Talk About Me.”

9. You think the perfect recessional song for your wedding is the old, favorite hymn, “Sound the Battle Cry.”

8. In honor of your Great Granny’s favorite church song, your first dance will be to the tune of “The Fight is On.”

6. You plan on offering many burnt sacrifices for dinner to shame your man into taking you out. 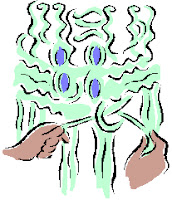 5. You start a file for all the wedding gift receipts so that returning the goods for cash is easier if this marriage thing doesn’t work out.

4. You feel a sudden urge to sign up for a macramé class to convince yourself tying a knot is a good thing to do.

3. As soon as he says “I do,” you plan on asking him to change more than his dirty underwear.

2. When asked, you decline picking up a broom, stating that you wouldn't want steal his mother’s sweet ride.

1. You are convinced that the better in “for better or worse” is another name for you. The “worse?” Well, isn’t that obvious?