For the love of the game

With that, Billy Chapel (played by Kevin Costner) shuts out the roar of the crowd, his vision becoming pinpoint. He reels back and hurls the pitch toward the chasm of the catcher's mitt. The thud against the leather palm of the waiting glove is deafening to the honed in pitcher. "Steeee-rike!" the umpire proclaims, arm pumping out the well-known sign.

As I watched For Love of the Game (again), I teared up at the last scene (again) even though the 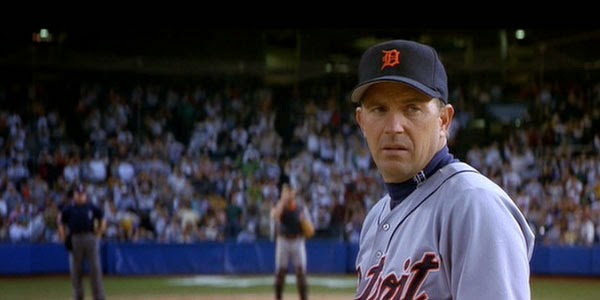 outcome of the flick was the same as the first time I saw it. 40-year old Chapman is three outs away from a perfect game. He is in excruciating pain from the thousands of innings pitched in his nineteen year career. But he's also conflicted and confused. He has chosen baseball over love but that will change. He decides his career will end with his final pitch.

In the aftermath of laying hold of that perfect game despite all odds, we are treated to a predictable airport scene where Billy and his love interest, Jane Aubrey, reconcile. One can just imagine a "happily ever after."

So what does this have to do with me? Admittedly, I am a sucker for against-all-odds sports movies. But I think I was drawn like a thirsty runner to an aid station by the title. I've been around ultrarunning awhile; 22 years and counting, to be exact. I used to be in the lead pack. I used to win a few races. I was often in the top three. And then life happened. I got older, trained less, and the young whipper-snappers started tearing up the trails.

Nevertheless, I run. I run for the love of it. I don't always "like" it but I keep coming back for more. 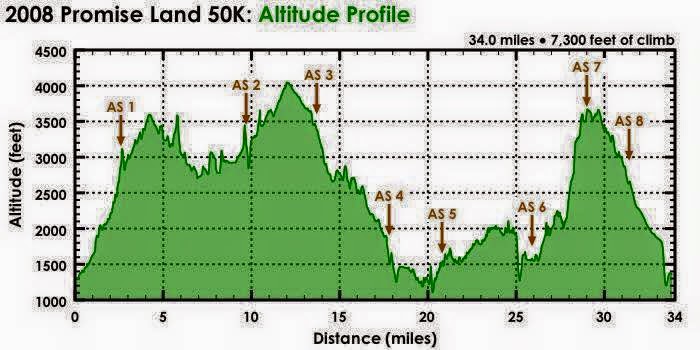 After a mind-melting week away from home and a late Friday night flight back to Virginia, I stood behind the start/finish banner in the darkness of the wee hours. It was the Promise Land 50K++ run up, over, and through the mountains and valleys of the Blue Ridge. (34ish miles instead of the expected 31 gives us good value for the money.) It begins with a steady and steep four-mile climb and proceeds to alternate with rugged downhills and more arduous ascents. One thing it is not is flat.

But it is beautiful: spring green, wild flowers, budding bushes, cascading waterfalls, narrow ribbons of trail, the scent of lilac.

I've been running more races this spring because for the first time in years, I am not not coaching. But long runs come in spurts and weekly mileage is not massive. Still, this Promise Land was a must-do if I am to complete the LUS race series. With two other 50Ks and a 100K completed since February, I could only hope for a magical day.

I guess I'm getting used to the back of the mid-pack. My proteges' run ahead of me. Though I am one in a long train of trail travelers, I run alone and silent. I like it that way. I eavesdrop on the not-so-sage advise of one novice runner to another. It makes me shake my head. "If only you knew." Still, as the weather suddenly turns, I relish the sleet and freezing rain that falls from the sky. I am comfortable and not bothered by the odd April weather. I smile and run on.

I play cat-and-mouse with other runners on the six-mile grassy road section down and around Onion Mountain. I run rhythmically and freely, breathing controlled. The sleet lets up. I pass some people. I smile and run on.

From Reeds Creek, I make the climb back up to the parkway. Though I am occasionally within earshot of fellow travelers, mine is a world of silence. I contemplate the weighty topics discussed in this week's intense training. I pray silently. I sing silently. I silently rehearse speeches in my head. I smile and run on.

The temperature drops and rain returns as I arrive at the Parkway and begin my descent down the rocky and technical "dark side" trail. But by the time I take a left on another grassy forest road, the weather improves as does the footing. Down, down, down. More rocks to negotiate. The sound of rushing water as the bold creek cascades over boulders is like music composed by an extraordinary musician. I momentarily interrupt it's song as I ford the swift-flowing waters. The cold water feels good on my legs. I smile and run on.

I am greeted at the next aid station. "Hey, I thought you gave this up since becoming a grandma." I chuckle and head down the course. The ease of the gravel road section releases my mind. I feel accomplished as I surge onward. Turning at the massive collection of orange streamers, I am ushered back onto blissfully sweet forest single-track. I arrived at the next age station, dumped a few hitch-hiking cinders from my shoes, and join in some friendly banter about "older" runners. I eat, drink, smile, and run on.

I begin to catch runners ahead of me. Shared steps lead to shared encouragements. I meet a young college runner. "What mile are we at? Do we have enough time to finish?" she asks, somewhat panicked.

"It's been 4:57. You have over five hours to complete about ten miles. No problem." Invigorated, she plows on, pulling away. She catches two girls in front of her. With my steady progress, I eventually catch and pass them all. I smile and run on.

Now there is a mountain to conquer. The climb is hard. Still, it's not like some other years when my legs fatigued and threatened abandoning me on the hillside. I felt in control. Apple Orchard Falls was spectacular, millions of gallons crashing over the cliffed wall to the rocks trail-side. I allowed two stronger climbers to pass but closed in on a line of runners as we approached the top of the three-mile climb. Comfortable temps and conditions gave way to a sudden drop in degrees and precipitation. The cold, torrential downpour forced me to don the jacket hiding in my pack. With a mere 5.5 miles to go, I smiled and ran on.

My legs churned on after crossing the parkway to take on the last short climb of the race. Then it was a right turn onto the same single track we had climbed earlier in the day. The trail, now offering mud and water through which to slosh, showed the way. Just follow the water: down, down, down. The switchbacks afforded me glimpses of folks I had been chasing all day. Soon the roar of Overstreet Falls signaled the last 2.5 miles that would bring me home. I smiled and ran on.

I ran and ran and ran. I was tired but not hurting. I was not in agony as in previous years. I didn't hate life. I continued to close the gap on those previously allusive runners. The orange-painted "1 Mile to go" line passed under my feet. The five-foot wooden squirrel adjacent to a mailbox toward the bottom of the mountain reminded me of the proximity of the finish. With the turn into the campground, the gravel gave way to sodden grass. The finish banner was just ahead. Two of my Shindigglers, the Quigg sisters having finished about twenty minutes prior, cheered. David Horton, race director, boisterously yelled into the microphone, "Rebekah Tripletoes!!!" He always calls me that. He thinks it's funny. I think it's endearing. I crossed the line, smiled. . . but did not run on.

Postscript: For an idea of what the race entails, check out this video created by medical director, George Wortley.
at April 27, 2015 No comments: