Good gracious. Is this what it means to get old? Am I on the fast train to senior citizenship? Geezerhood? Is this the beginning of the end? I'm out of bed and writing at 1:45 a.m. and have no idea where this story is going. That can't be good. 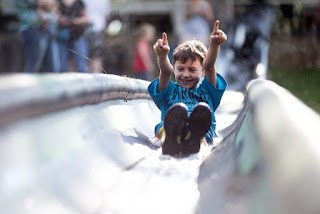 Maybe it's because I am in the post Muddy Muck Madness phase of life. The mud and obstacle run is the sole event each year that serves to put much needed resources into my self-funded FCA ministry. I love this race, this frolic (or more like a wallow) through the bogs that steal both dignity and shoes, across fields, through tunnels and creeks, along wooded trails, and across precarious floating bridges that stretch across the lake. And this year, the task of preparation escalated exponentially with the construction of a true-blue 120' water slide. Lots of people showed up this past Saturday, the air horn sounded, and mud flew. Then as quickly as the race began, the muck-laced racers drove away, leaving me with the daunting task of deconstruction. Had it not been for my husband and two other kind souls, I would still be removing bolts and dragging culvert pieces to their resting place, awaiting next year's action.

Much like the delayed exhaustion after a hard race, it hit me today like a load of bricks. Driving around doing the errand thing nearly lulled me into lala-land. Plans for a long, hard trail run must have figured out the child safety locks and jumped out of the vehicle somewhere along the way. But I managed to make it home safely, put away groceries, and head to the bed for a nap. A nap! At 4:15 in the afternoon! Aren't old people the only ones who take afternoon naps? As I sunk beneath the covers, I mumbled to Gary (whom I had awakened from his afternoon catnap on the couch when I entered the house), "Does this mean we're old?" 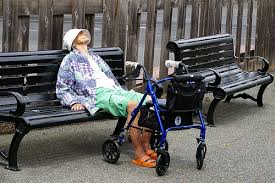 OK. So maybe the hour and a half dosey-doze is the reason for my restlessness in the middle of the night. Maybe the ideas whizzing around my cranial spaces akin to the thrill seeking motorcyclists who scream through the spherical cage of doom are keeping me awake. Or maybe it's the prodding I felt after reading a friend's new, and always terrific blog post. For heaven's sake! She has a baby and found the time to scribble in cyber-space. My children are grown and gone. I'm a grandma. I'm supposed to be in the life-contemplation, slow-paced stage of life. Right?

Nah. It's not that easy. Life is still a whirl. Ministry paths are morphing into this living, breathing creature not previously known to mankind. I think maybe today was the calm before I board the ship and sail into the storm. Not that the storm is bad. The coming storm is beautiful in many ways. But the storm is sure to slap some crazy waves against the bow. I will not avoid getting soaked, maybe even tousled about and nearly thrown overboard and drowned. And actually, I'm not quite sure of the ship's final destination. All I know is that this cruise is sure to be an adventure.

Maybe I did need that nap. Maybe I'm not old. Maybe I'm just preparing for a new voyage that reveals itself more later this morning.