Wow. It's been a while since I posted anything related to daily running. Rest assured, however, that I have been faithful. There have been bouts of vertigo, insane schedules, and more on my plate that I ever could have imagined. But somehow, I have been putting in miles, albeit not many long runs. In fact, my mileage is on the puny side. Still, most days I feel decent; Decent enough to keep pace with most of my cross country runners.

So, please excuse the brevity of this little report. I just came back from a run and have to get things in order for the morning.

I think I have a better understanding of the term "Dizzy Dame." My perspective on the matter has been particularly acute in the last twenty-four hours.

Out of nowhere, I started to think I was in one of those crazy amusement park walk-throughs where the floor is off kilter and everything feels catty-wompus. When I turned my head, it took a while for the insides to stop sloshing. And when I got still, my brain kept right on going round and round the traffic circle, just like the Griswalds in European Vacation. Initially, I thought it was dehydration. I had just gotten through with a long run in very hot and humid conditions. But it wasn't. No amount of water stopped the madness.

I hit the couch, listless. When that didn't help, I tried the bed. The room wouldn't stop spinning, even with my eyes sealed shut. And oddly, I was much more dizzy when I laid on my right side. In fact, it was so bad my stomach started turning in the opposite direction. 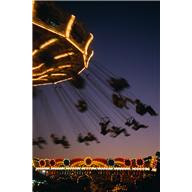 I hoped by morning it would all be a thing of the past. But upon opening my eyes, I found that the room was still in motion. Devastated by the discovery,  I stumbled my way to the bathroom, soaked by another round of profuse sweating. Dry heaves produced nothing but an impulse to get outside in cooler air. Gary helped me to the back door where I dropped onto the steps and continued the retching. Nothing. But the morning air seemed to help. I made my way back into bed and stayed there for hours, praying for sleep to work its magic.

The entire day has been on again, off again. I have a better appreciation for the vertigo Gary gets when he works on the car, having to repeatedly change positions. He says Dramamine helps. It might. I tried it. Then, another running friend suggested that running makes it better. The theory is that it get all those tiny particles in the inner ear get freed up and moving the way they should. Tried that too, if you consider walking a little over a mile is running. Jury is still out on that one.

Anyway, I've been thinking about spiritual vertigo. When a stressor comes along, I get caught up in the cyclone of turmoil. I lay down and close my eyes, praying it will go away. And it does, for a while. I settle into a welcome slumber and upon waking, keep my eyes closed to assess how I feel. Not too bad. I'm relieved. But then it's one eye followed by the another. My brain registers the facts. My condition is the same. The anguish returns and the world I live in still spins.

The problem is that sleep seldom heals. It simply masquerades. In order for the spinning to stop, the insides need to be fixed, balanced and in perspective.

Oh, Lord. My insides need fixed. Allow me to trust in your sovereignty. Shower me with sufficient peace and faith as you promised to do. Give me wisdom to know how and when to reach out a hand. Oh Lord, my Lord, stop the spinning.
at September 02, 2012 No comments: