Encouragement for all former coaches 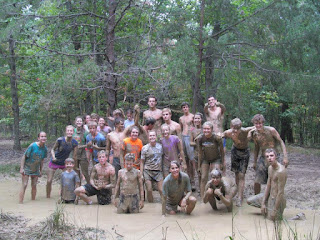 I used to be a coach.

I loved being a coach.

My life revolved around the responsibilities of being a coach. The plan started broadly but narrowed. Seasons broke down into months, months into weeks, weeks into days. Many factors came into play: schedules, goals, age and talent of kids, weather, facilities, conditions. 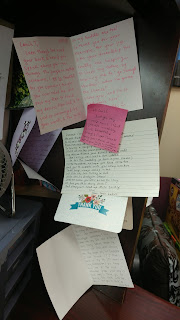 I was a hands-on coach. I never asked the kids to do anything I would not do. If I asked them to suffer, I suffered as well. It was them and me that always become a "we"; for better, for worse, for richer, for poorer, in sickness and in health, we did it, so help us God.

Coaching was not easy, nor was it always fun. But then again, most things of worth are not without difficulty and challenge. Sometimes it was a grind, especially if I was already dead-tired after a long day. There were occasional behavioral issues and conflicts that required extra energy. It was impossible to please every athlete (or parent) with decisions and plans. A utopia it was not.

Coaching was an opportunity to teach not only athletic skills and process, but model the deeper things in life; perseverance, excellence, duty, responsibility, teamwork and selflessness. See one, do one, teach one. 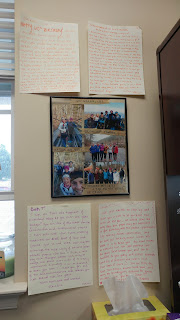 I struggled with discouragement as a coach. Was there anything I did or said that merited remembering? Was there any positive impact from spending time with me? There were many days I concluded the answer was "no."

And then came Sarah, Micah, Abby, Rebecca, Caroline, Kendal, and Nicole, to mention but a few.

With one exception, each of these girls are now college grads. One is a teacher in Mexico and soon to be married. Two are headed for medical school come August. Two are beginning their careers as critical care nurses. Another is teaching Spanish while working on a graduate degree. The other? She is a college senior and is on a sure path to medical school as well. All are highly motivated and proficient in their chosen fields. All tell me they are building off of what they learned from me as a coach and now a friend. That makes my heart smile. 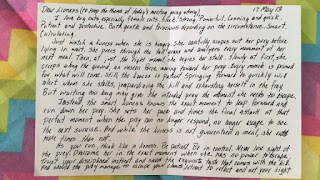 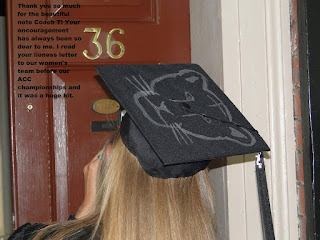 Micah has had a stellar career at the University of Virginia as a top 800 meter runner. The other six are charter Shindigglers. Together we have covered miles and miles of mountain trails. We have shared life and love, pain and struggle, challenges and breakthroughs. These kids were a joy to coach as high school students and continue to encourage me through tough times of self doubt. I suspect, however, they have no idea what they have meant and now mean to me.

These young women give me hope that maybe what we experienced as coach and athlete had some lasting impact. They still write me notes that I will cherish 'til I die. Micah recently asked if she could share a letter I penned before her last run as a high school student. She read it to the UVA track team before the ACC championships, saying it opened the tear gates. It was hard to believe she had kept it over the years. It was even more amazing that it meant something to her. 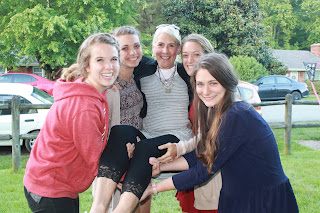 I miss the relationship-building opportunities I had as a coach. I long to see young athletes develop from season to season. To not have a team to call my own leaves me feeling empty. But while that role as coach may be in the past, I draw strength that for at least a few, I may have served a purpose.

Coaches, be encouraged. Sometimes what we do actually matters in the long run.

A perfect opportunity. Not a perfect race.

"Hey," David Horton blurted out. "There are some kids here that want to talk to you."

With that, about six college students approached, all of whom were in Horton's college running class. They were almost giddy when exclaiming to each other, "It's HER!" I had the feeling this was going to get uncomfortable in a hurry.

With the eager students gathered 'round, they wanted to know more details about my race through the Brazilian jungle. They had all read my book about the experience as a part of their running class requirements. Questions about snakes and jaguars morphed into advise for the race in the morning; their first ultramarathon, the Promised Land 50K+ mountain adventure. The banter back and forth was entertaining, but their view of my abilities was way too high. Most would end up beating me to the finish.

Fast forward to 5:30 a.m. the next morning. Horton sent us off into the dark once two trumpeters led us in the National Anthem. I certainly felt more energy than two weeks prior when a training run left me discouraged and feeling old. I had already completed three ultras in three months, running much stronger than anticipated given my low mileage training. ("Training" may actually be too generous a word.) But for the last while, my legs felt dead and my breathing labored even on short, easy runs. Getting sick was partially to blame. I still had crackly stuff in my lungs. But in the already warm morning darkness, I felt a little lighter on my feet. Happy times.

Up, up up. Down, down, down. Up, up, up. Down, down, down. That pretty well describes this race. I was running in the middle third of the 330 person field, gladly playing cat and mouse with a number of people throughout the day. The two youngest Shindigglers, Hannah and Makena, got away early before I caught them again. When they pulled away the second time around mile 13, I thought there was still a chance of catching them later on. It had happened before, and with any luck, it would happen again.

But then again, both my calves and a hamstring may have conspired against me.

Maybe it was the near-90s heat and humidity. Maybe it was the low miles I had logged. But for whatever reason, the calves started the quiver routine fairly early, around 18 miles. Of course, I shortened my stride and pounded the fluid and electrolyte intake. Gaining control, I proceeded to make progress, grateful that cramping was my only issue. Nevertheless, the "only issue" turned into a major one. At times, I pulled up suddenly when the muscles decided to lock into place. Ouch! Not nice. Each time, it slowed my already relatively pedestrian pace, and frustrated me when quite a few runners slipped by me from about mile 23 to 28. I felt my hopes of catching Hannah and Makena fade, especially knowing they would be running faster than normal with the two older non-racing Shindigglers running those 15 middle miles with them. Still . . .I had to try.

By the time I started up the three-mile climb counter-current to the bold, rushing, cascading mountain stream, I rehearsed some of what I told the college kids the night before:
Geez. Not wanting to be hypocritical, now I had to practice what I preached. I did the best I could for where I was. I ran when I was supposed to run. I walked when I was supposed to walk. I was purposeful of what I sent to my stomach. My brain politely requested my muscles to relax and cooperate. I pushed on, thankful. It didn't always get worse.

Partly fearful of having another super masters woman catch me and partly out of ego, I topped out at the last aid station better than I had left the previous. There were only 5.5 miles (or so) to go. My legs didn't feel too weary, and my energy reserve was adequate at this point. Now if only my muscles would refrain from those annoying and painful tetanic contractions.

Leaving the last aid station, I upped the prayer game. "Lord, protect me. Keep me from stumbling or tripping. Don't let me wipe out on this rocky trail. Keep my old muscles from curling up into tight little balls. Let me get down this mountain unscathed."

My feet hit the steep gravel road for the final couple miles. I had passed some people higher on the mountain, and again on this section. Some were reduced to walking even on this long downhill. Encouraged, I made myself continue to run, continue to steadily push forward and downward. Whenever my calf muscles began to tighten, I backed off a notch. With one mile to go, I glanced at my watch. I had roughly seven minutes to break eight hours. I remembered telling a friend that I would be happy if I was under eight.

Shoot. I have to admit, I was pretty sure it wasn't going to happen. I found myself on the edge physically with little left from which to draw. 8:01 is what the timers recorded when I crossed the line. It was my slowest finish of the ten times I had completed Promise Land. I was glad to be through but somewhat disappointed nonetheless.

I have to be careful to refrain from comparing myself to my previous, speedier runs over an hour and a half quicker. I need to be cautious in applying value to where I fall in the overall and gender standings. But I also have to be open to learning from the time out on the trail. An old dog can learn new tricks, and this dog happens to think a few more miles prior to the race may go a long way in keeping muscles happy and cooperative.

This was certainly not a perfect race, but is was a perfect opportunity to remind myself how to run.
at May 01, 2017 No comments: