When calls the heart

When the heart calls, listen.

I should not have been surprised. And to be honest. I was not. But there I was in the doctor's office being shown the results of a Cardiac CT, a totally non-invasive screening test that looks for calcium deposits in the coronary arteries and aorta. My numbers indicated a high likelihood of coronary artery disease. Shoot.

Within days, I sat in another office, this time cardiology. I specifically picked Dr. Pete O'Brien

because as an outstanding runner himself, he understood runners. He listened carefully to my conundrum: Was my inability to get fit a result of a natural aging process or was there a cardiac issue? Let's pause so I can fill in the back story.

The last year and a half have been rough. Between a knee injury post the 2017 Mountain Masochist 50 Miler, caring for my father-in-law in our home during the final nine months of his life, and an unfortunate incident in February of 2019 that left me with a distal clavicle fracture and two scapular fractures, training has been difficult to say the least. Try as I might, it was just so hard. Yes, I know getting fit is supposed to be hard, but THIS hard?!?!? I kept having conversations with myself. Was I just playing out the age card that tells me I am supposed to be getting slower and wimpier? Or, was there something else, something more medically sinister in nature?

That something else was cardiac disease. Several years after a massive heart attack suffered while playing a championship tennis match, my father died post cardiac surgery and on an LVAD (left ventricular assist device) at the age of 62. I am currently that same age. My mother also has cardiac disease, earning herself a stent some years ago and now suffering with significant valvular disease at age 91. Many of the grandparents, aunts and uncles on both sides have died as a result of cardiac-related issues. My chances of escaping this ominous heritage is slim.

There have been a few runs in the last year or so when I felt somewhat normal. Not fast. But OK. Reasonable. However, on too many occasions to count, it just felt harder than it should have been despite my snail-like pace. I ran mostly by myself, avoided roads with traffic, and embraced night runs. I was embarrassed, quite frankly, with how pedestrian I had become and wished no one to see me slogging along. I know what it takes to get in shape but this seemed a bit ridiculous. I tried to be patient. "Just be glad you are moving," I would tell myself, even if it meant A LOT of walking. It was immensely frustrating.

The day before I saw Dr. O'Brien, I went for a short run through the woods. "Smooth and efficient. Just be present. Don't rush. Enjoy the cooler temps and lower humidity." But even on an extended downhill, it didn't feel right. When I began the trek back up the mountain to the car, my legs and arms felt very heavy. I had no chest pain per se, but did feel a tightening in my throat and up into my jaw. When I slowed down to a walk (which wasn't far from my "run" pace), things felt better. This pattern, that had become typical over the last 18 months, was repeated all the way back to the car. 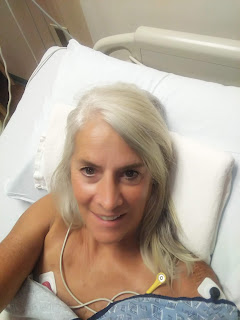 "How do you feel about invasive procedures?" Dr. O'Brien quarried.

"YES!" Let's do the cath!" I was sick and tired of wondering if there was a cardiac issue. A cardiac cath would leave no doubt. If I was cardiac disease-free, I would chalk up my pitiful attempts at training to being older, but commit to do the best I could under the circumstances. If it was cardiac in nature, then there would either be an intervention in the cath lab or a trip down the hall to see my favorite cardiac surgeon. Either way, I was so happy that answers were forthcoming. Without hesitation, Dr. O'Brien scheduled me for his first case Monday morning. This was Friday. I couldn't help but think there was a degree of expediency to get this done.

In the aftermath of the visit, I glanced at my instruction papers. It was strange to see CAD listed as a new finding. I began to mull over contingency plans work-wise should I end up on a surgical table. That would really booger up plans for the scheduled August and September team retreats I was tasked to implement. And should I run in the meantime or not? Running is a way to clear my head. So, yes. I ran. Don't worry. I ran comfortably in the cooler darkness, only about 4 miles, and it was fine. Still, questions and possibilities swirled. Potential plans slowly evolved.

Arriving at the hospital at 6 a.m., I was quickly admitted to the unit, changed into a hospital gown, and prepped for the procedure. Having been a cardiovascular perfusionist for so many years, I spent a good amount of time in cath labs. They didn't scare me. In fact, I was looking forward to experiencing the whole process from a patient's perspective. In fact, for the first ten minutes in the cath lab, I had a grand time chatting it up with the nurses and techs. I noticed the circulating nurse loading a syringe into my IV line, immediately feeling a slight swoon. "What was that?" One CC of Versed had left it's mark. But I was still able to tell him that I wanted to be alert and watch everything. Well,
that didn't work out too well. Other than a few moments when I saw the guidewire across the lesion on the monitor, I remember nothing. Nada. Not the doctor coming in. Not any discussions I may have had or heard. Not any dye coursing it's way down the arteries. Nothing. That makes me sad.

I do not remember the procedure being over. I have no recollection of arriving back in my room. To me, it seemed like only 15 minutes had passed. I was shocked to know I was in the lab for over an hour and a half. Gary tells me I asked him the same questions a million times, suggesting a foreshadowing of my senility as an old woman. Supposedly, the doctor told Gary I was talking appropriately after the procedure when he explained all that he did in the lab. Dr. O'Brien also told Gary I may not remember that conversation. He was absolutely, unequivocally correct. I recall NOTHING. NONE. NADA. 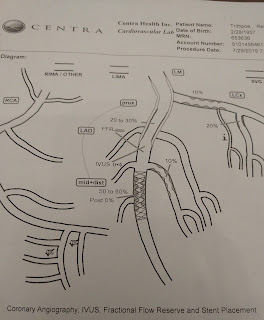 Dr. O'Brien, the good doctor, later come to my room armed with his computer. This I do remember. For me, this was the first time I actually heard him explain that I had a long lesion in the mid-LAD. (The Left Anterior Descending is a major artery supplying a significant portion of the left ventricle. When blood flow is insufficient, that part of the heart dies.) Tests he did evaluating blood flow (IVUS and FFR, both state of the art technologies) led him to place a drug-eluting stent across the 60% stenosis, therefore increasing the diameter of the lumen and theoretically allowing sufficient blood flow to all left ventricular tissue feed by the LAD. A blood-fed heart is a happy heart. "Do you think this explains the way I felt when running?" 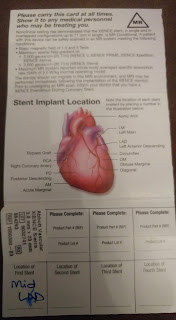 "Yes," came the confident reply. I felt relieved that my slogging was not imagined nor was it self-imposed. I was happy and hopeful that I would be able to get back to normal training without having to second-guess myself. He left the room, and I returned to asking Gary the same questions over and over.

And now in the aftermath, reality sets in. I am now a card-caring cardiac stentee. I am to carry this card at all times since having the stent may impact future treatments or procedures. I have a mesh tunnel inside a coronary artery. It's my personal tiny alien who has taken up residence. It's my forever buddy. Perhaps I should name it. Hum...Stanley Stent? 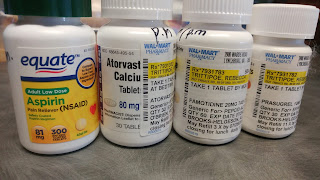 There is a treadmill stress test in my near future, followed by three months of cardiac rehab. I have a plethora of drugs that I must take. The stent is a foreign object in my body. Means need to be taken to prevent a clot from forming on the metal mesh. "Whatever you do, don't forget to daily take the Prasugrel! You will take this for at least a year, maybe a lifetime," explained my discharge nurse. My new normal has turned my kitchen counter into a satellite pharmacy. Maybe I should get those little multi-day pill boxes to keep myself straight.

Hopeful to be able to train. Hopeful to be fit. Hopeful to embrace challenges rather than fear them. Hopeful to develop a third generation of "Shindigglers," young women who grow to love the mountain trails as much as I do. Hopeful to push the limits of what is possible. Hopeful to dream--and complete--great new adventures. Hopeful to run long, run strong...one day at a time.