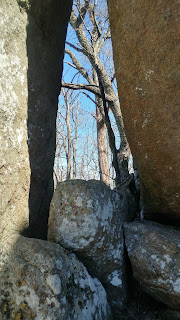 It had been awhile. Life - including a busted up shoulder - had gotten in the way of regular trips to the mountains. But with near perfect weather, the mountains called my name and I had to go.

It's not that today's ramblings were of epic proportions. It was probably no more than 11.5 miles, though fairly technical and rocky. But with sun shining, birds chirping, and pleasant temps, my solo venture was a welcome escape from normal day to day schedules. I was free to climb, free to go faster or slow down, free to lollygag to snap photos, free to scramble, free to think, free to figure, free to remember. But most of all, free to be me.

With my car parked at the end of a gravel road, I began the steady climb. How many times had I been there, done that? Too many to count. I remembered many January 1 "Kingdom runs" that had their beginnings and end at the same trail head. I recalled how I shared these beginning steps with neophyte trail runners, some of which were kids I was coaching. Usually, a half mile up we took the trail to the left to begin the loop. With gentle ups and down, ins and outs, and multiple stream crossings, it was a good way to ease into the run.

Instead of making that turn to the left, today I forged straight ahead. "Straight ahead" meant three miles of steep, hard climbing, interrupted only by two short descents to be positioned for the next extended ascent.

I remember in former days doing repeats of this climb in an attempt to beat my body into submission; to become accustomed to climbing harder and then descending faster without regard to fear or failure.

I remember the rock garden, steep and difficult to climb, but even more challenging to descend. So many memories of snowy, icy, and wet and leaf-strewn conditions which rendered the downhill direction treacherous at best. Today I was glad for the slower, more controlled uphill direction.

Ascending further, I remembered when the earliest version of the Terrapin Mountain race was run in the clockwise direction one year; the next in counter-clockwise direction. I remember running this section with Jonathan Basham, pushing hard to stay in front of the crowd, but managing to talk about time spent on the AT. I remember passing a runner who collapsed out of exhaustion halfway up the mountain. He was a road runner who apparently had little respect for what it took to conquer a couple thousand feet of ascent.

Arriving at the rocks with a view, I pondered how many times I had stopped to take in the scenery. Across the way wound the Blue Ridge Parkway and the Appalachian Trail. Down below, the road through the valley had been my chosen path in many a training run or race. But the rocks themselves? It was a photo op for all the people I brought along with me in years past. The rocks were a place that encouraged a welcome break from the downhill quad pounding. And to be honest, those rocks were one of the first places I learned the art of peeing standing up, carefully noting wind direction to avoid a warm stream hitting my shoes. These were the best of times and the worst of times.


Higher up the mountain I came across Fat Man's Misery, a narrow sliver between rocks that runners in the Terrapin Mountain races must pass through. But besides the passage during races, this place was a highlight of the time I took my high school distance runners on this loop. It was December. We had encountered thigh-deep snow higher on the mountain, with icicles dominating this hollowed out rock alcove. Those who failed to wear tights and ankle-covering socks, sported bloody ankles at this point, a result of breaking through the ice-covered snow. Still, I remember nothing but smiles; sweet, sweet smiles.

I remember passing through the rhododendron tunnel many times when it was in full bloom, the white showy flowers marking a magical pathway. Unfortunately, today's journey preceded the flowery spectacle. But shortly after the traversing the tunnel, I glanced up to see the summit and the knoll that came before. Immediately, I could hear faint echos of David Horton quipping, "Just one more knoll until
the top," as if he thought his humor could ease the reality of far more climbing.

I maneuvered out on the rocky ledge on the summit, something I had done countless times before. On this run, four buzzards startled me by rising gracefully from the treetops below to soar effortlessly overhead. I could not recall this ever happening. Still, as I gazed over at the valley and then to the "golfball" perched atop a neighboring mountain, I clearly remembered so many races and training runs through those hallowed grounds. Blazing hot, freezing cold, or somewhere in between. Some runs were with friends. Many I chose to venture solo. So much time spent. So many miles covered. So many memories made.

This journey was in a counter-clockwise direction. I breathed a sigh of relief once I reached Camping Gap, glad that the technical and rocky trail off of the summit was behind me. I remember thinking about how happy I was during the counter-clockwise races to feel free to pick up speed on the next three downhill miles. And then as I ran further down this section of trail today, I clearly did NOT remember how rocky and crappy those miles actually were. Perhaps years of washouts have turned up more loose rock, or perhaps I merely suppressed the memory of the ankle-wrenching
terrain. Nevertheless, I picked my way off the mountain, amazed at how fast the streams ran, overflowing normal boundaries and flooding the rough forest road. Though I plunged right through the water on this run, I remember so clearly times when my running partners and I tempted fate and the risk associated with crossing mid-stream rocks in an attempt to own dry feet.

Reed Creek was stampeding today, cascading over rocks and creating small whirlpools between the boulders. How many times had we posed for pictures at this same spot? Too many times to count. How many times did I rush across the stream in the other direction, anxious to complete the last mile and a half of the race? Lots. But today I did not rush. I put those impulses aside and carefully picked my way through the stream laced with algae-covered rock, bracing myself against the swiftly running water. 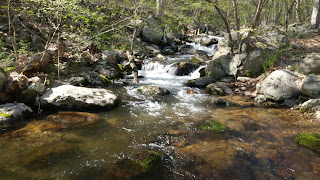 I clearly remember the four or five miles that wind along the front of the mountain. Up and down. In and out. Countless sweeping turns and shallow streams to cross. "Surely, I'm getting close." But alas, another up, another down, another twist, another turn. My memory served me well. But rather than feeling my

impatience in the past, today's travel along these miles made me smile. The temperature was perfect, the late afternoon
sun filtering through the newly budded trees. I owned the trail, sharing it only with an occasional squirrel taking advantage of his own outdoor playground. Ground flowers in a variety of colors and shapes seemed to nod as I passed by. I gleefully stomped through streams and admired the waterfalls. I was happy to run, happy to hike, happy to remember. 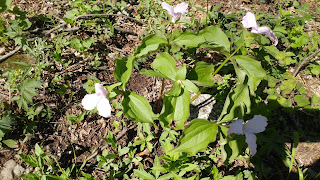 Arriving back at my car, I recognized that same satisfaction of finishing a journey as I experienced so many times over the last 25 years. I realized that despite what might come in the future, being able to remember what happened in the past is enough. I am grateful.