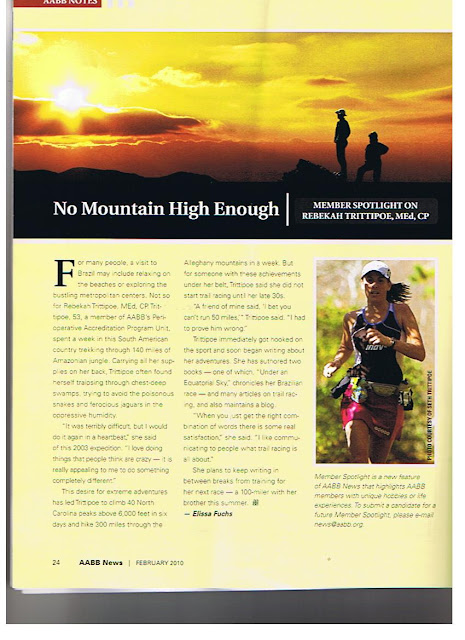 The February 2010 edition of "aabb NEWS," a monthly publication of the American Association of Blood Banks, ran an article about yours truly. In the section entitled "AABB NOTES," it highlighted my efforts out there on the trails. It's exciting to see non-runners get stoked about extreme efforts. Hopefully, someone will get off their couch and start moving as a result.

Wholehearted devotion and a willing mind

Can't you see it now? A coach stands before her team at the front of the season. Last year, they were the talk of the town--and not in a good way. Her gaze shifts from one to another. Rhonda, a tall, lanky girl, has a hard time walking and chewing gum at the same time. Jen has boundless energy but little talent. Shy and reserved, Erin finds it difficult to come out from behind her classmates' shadows. Sheri, Kathy, Ann, Melissa, and Emily Dawn, ED for short, are decent athletes but too easily distracted by the newest movie or a hot new tune. What's a coach to do? What can she say to make a difference?

Break away. Try this. Patty is nearly fifty and just a little plump; the pudge sneaking up ever-so-slightly over the years. An athlete in her high school and college days, she could have been a stand-in for the Energizer Bunny. She strove for excellence in everything: school, sports, her faith. But that was then. This is now. With the kids gone, the world screeches to a halt. She is tired; slightly disoriented. She wants off the merry-go-round. And yet, something deep inside stirs. She wants to excel once more. She yearns for the endorphin rush earned from a hard workout. She wants to feel her ponytail swish rhythmically as her pace increases, the ground blurring underfoot. She wants to feel alive, vibrant even. It's been so long.

Then there is Hannah. Sitting on her bed, she looks to her nightstand and the book placed there. It is angled and looks artistically arranged. With the lamp and vase of flowers, it makes for a nice display--just like in the magazines. "Is that dust?" she muses, reaching absentmindedly to wipe the cover. The leather-bound book feels nice in her hand, so much so that she strokes the binding and admires the gold-edged pages. She lifts the book to her nose hoping she can still smell the crisp, fresh scent of a new volume. She can. But wait. When was the last time she opened it to read? The pages were not worn from use. Where to begin? Her thumbs gently separate the pages, her eyes landing on these words: "And you. . .acknowledge the God of your father, and serve him with wholehearted devotion and with a willing mind, for the LORD searches every heart and understands every motive behind the thoughts. If you seek him, he will be found by you; but if you forsake him, he will reject you forever" (I Chron. 28:9). She pauses and contemplates.

The coach. The team. The woman. The seeker. Every person, every situation calls for a conscious decision; a decision to give yourself wholeheartedly to the task. To have a mind willing to serve. To seek He who made you.

Things that go bump in the night

Things are very strange around here! The dead live again and the alive just die. Let me explain. . .or at least try.

We’ve had a rash of huge possums visit our recycling bins right outside our back door. With their long pointy snouts, beady eyes, and razor-sharp teeth, it's unsettling to have an unexpected encounter. And these are not babies. They are huge animals much larger than our cats. Just last week, I opened the door to toss out a plastic bottle and came face to face with the creature. I was obviously more scared than him. He chose to bare his teeth and then continue with his rummaging. “Gary,” I called out. “A beast is out here. Come quick.”

“Well, we sure don’t want that thing coming in the kitty door. I’ll get the .22 and take care of it.” Country living at it's best.

With gun in hand, he shot it in the head. Did it die? One would thing so but. . . A couple more shots did him in but not before it thrashed around in dramatic fashion. Finally, his body stilled. The following morning I took his frozen carcass and threw it into the woods; a lovely meal if you're a scavenger.

Two nights ago it happened again. Opening the door to make another re-cycling deposit, possum's brother  perched on the rim of the can just inches from my hand. Teeth bared and looking very menacing, I slammed the door so hard the glass rattled. Out came the gun again, Gary taking care to shoot it in the vitals. Blood spewed and the animal convulsed before keeling over. That was the end of him. Whew. I hate possums.

Or was it? The possum was gone when I went out the next morning with more bottles. “Oh, good. Gary must have thrown him out” I thought, before moving on to my next task. At supper, I asked my husband what he did with it.

"Nothing. What are you talking about?”

"The possum. He’s not out there and I didn’t move him.”

In a flash, Gary was up and outside, perplexed. “Seriously. I didn’t move him. He was so dead. . .at least he looked dead! How did he manage to get out of that deep barrel?!?!?!” I guess we know why they call it “playing possum.” He sure fooled us. But still, I can't imagine he'll come back.

But that isn’t the end of the story. A mouse, with beady eyes rivaling the possums', took up residence in my kitchen cupboard. Even our cat, Juno, knew it was up there--and she didn't even see the all the droppings. She was on high alert the other night, staring at the cupboard while figuring a way to break through the door to make the catch. (Good kitty!) However, we took the human approach. . .a mousetrap with peanut butter. Risking smashed fingers if we absentmindedly reached for a Pop-tart on the second shelf, we figured the mouse was in the bag (or trap, in this case).

Sure enough. The mouse was dead as a doorknob by the next nightfall and he sure wasn't playing possum. Funny thing is, that trap never tripped. The mouse's hairy little body was draped unceremoniously over the cup tray's edge on the first shelf.  Did it have a heart attack? Did is die of old age? Was the Pop-Tart poisonous? Who knows?

Strange happenings. . .you might want to keep that in mind if you come around here.
at February 19, 2010 8 comments:

I am happy to announce that "Pace Yourself: 366 Devotions from the Daily Grind," has been accepted for publication by CrossHouse Publishing. The book is expected to be released in May 2010. I am very excited at the prospect of sharing this with all of you!

Here is your first taste, taken from the Introduction:

"Pulled from the recesses of a tiny closet tucked under the stairs, the simple cardboard boxes showed their age. Each, encrusted with a deep layer of dust, held valuable treasures unfitting such a humble hiding place. Choosing one, I gently blew the surface clean and pulled open the box flaps. Not yet wanting to disturb the contents, I sat up straighter in my cross-legged position and took it in before reaching to open the remaining boxes. There before me were hundreds of letters still in their faded envelopes, most written in the mid-1940s.  Each had been meticulously opened, none carelessly torn. Gingerly, I pulled one from a box and began to read.

Hours passed. My legs cramped and my hands and lap grew dirty from handling the old mail. But still, a life unfolded before me; a life I didn’t know. You see, these were the letters my Father had written in his college years. Long before the day of email and cell phones, he kept a steady flow of letters to his parents and chums back home. Like a ping-pong game, mail bounced in both directions. And somehow, each letter was saved and sealed into a box for safekeeping.

My Dad’s letters, written in that distinctive yet tiny penmanship, revealed a lot about his day to day life. He was a descriptive writer, sharing detail some might consider mundane. I learned about his classroom habits, I read about his play on the baseball field, I saw letters of acceptance into dental school and I viewed pictures of his pals. But more importantly, through his writing I came to understand his character. I could feel his joy and his disappointments. And, I sensed his strong and steady faith. Those boxes of letters became his life’s journal. I am forever grateful.

Now sixty-some years later, I take a similar path. Though without postage, I create my own journal; a collection of stories and experiences throughout a single year. Each entry is my letter sharing real life. Not life the way I wish it to be. Just plain life. Some entries may seem ordinary. Some extraordinary. But all are written with a singular purpose: To discipline myself to see God working everyday in every way.

I invite you to journey with me as I begin to train my mind to understand that this God of the vast universe is also the God of the smallest detail. I too often want a dramatic theological breakthrough but fail to see the lessons in pulling weeds or watching a simple sunrise. Come. Take a walk with me through 366-days of normal, ordinary life."
at February 11, 2010 2 comments: