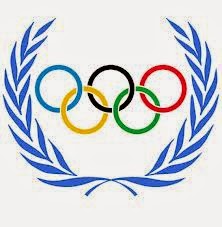 Cue up the music. Roll the film. Panoramic vistas of rugged mountain peaks. A visual montage of athletes flipping and spinning, intensity at the start and fall-on-the-ground exhausted by the finish, smiling and devastated, victorious and defeated. I can't seem to get enough of this stuff.  All of it. The good and the bad. The beautiful and the ugly. The games conducted under those five interwoven rings get me every time.

I can't remember a time when I did not feel the pull of competition, the appeal of running fast, the joy of pounding the ball into the ground. I had grand plans to make it to the Olympics in a variety of sports. (Please don't laugh.) The pathway to achieve them began with handsprings over the couch during commercial breaks while watching the summer games. Even my elementary gym teacher, Mr. Stranges, told me he was sure he would see me compete one day on the Olympic stage. I never, ever forgot that.

So, did I make it? No. I made decisions along the way that took me out of the running. I decided against a spot on an AAU track team because the girls were "rough" and made me feel very out of place. I turned down scholarships at a powerhouse track program to attend a small Christian college that had no track program. Nevertheless, I played three sports in college, and continued to play USTA tennis and USVBA volleyball at a high level as a post-collegiate athlete. And then, years later, someone said, "I bet you can't run fifty miles." I bet I could. I was 37 at the time. I am still running
long at 57.

People often ask me why I run. It's a simple question with a complex answer. Just ask one of the athletes I coach. The other day she wore a t-shirt bearing this phrase: "If you have to ask me why I run, don't bother." Snide and haughty perhaps, but it implies there is something deeply spiritual about putting one foot in front of the other. It also suggests that some people just don't "get it."

So, why do I run? Why did I play sports all through my high school and college career? Why persist
in adult leagues and competitions as an adult? I used to glibly answer, "Because I can." But not now.

While it's true that I can run, I've realized that a better answer would be, "Because God made me this way." There's a big difference. No. A huge difference.

What's your answer? Why do you do what you do, be it athletics, writing, crafting, music, or something wildly different? I've always approached athletics--as a participant and a coach--as a way to mature spiritually. Sports teach so many lessons about steadfastness, staying the course, perseverance, and wholeheartedness. We equate the toils of training as opportunities to "press on" and "run the race with patience" (Philippians 3:12-14; Hebrews 12:2).

There's nothing wrong with using athletic analogies. The writers of Scripture used this parallelism to make important concepts more understandable. However, when thinking about God's sovereignty, I've come to realize that His express purpose was to make me athletic, to make me a runner. It didn't happen by accident. I relate to Eric Liddle, the Scottish Olympian who is quoted in Chariots of Fire: "I believe God made me for a purpose, but He also made me fast. When I run, I feel His pleasure."

Why is that? Is it so I can set records? So I can be in decent physical condition? While those things may happen, I suggest they are not reason enough. The reason why God made me a runner was to equip me to ultimately reflect His character. I have to look at my athletic endeavors as a means to an end, not a means unto itself. If I can run (even if more slowly now) to present Christ to people, then I will run. If I can attempt trail records so it gives me a platform to write about God's faithfulness, then I will go to the mountains. If I can use my experiences to coach and encourage young people, then I will continue down the trail to lead them.

I suggest we consider our talents, no matter what they be, as a specific means to God's end. That should be motivation that lasts beyond a hastily made self-promise.

Books have movie trailers, too!

Pictures can be worth a thousand words. But a movie is worth a million.


Spend a minute and a half to be inspired. We hope the new movie trailer for
Best Season Yet: 12 Weeks to Train
will inspire and motivate.

To learn more about this book (which is available in both coach's and athlete's editions), click here.

You may order from the website store or from any bookseller, including Amazon.
at February 09, 2014 No comments: