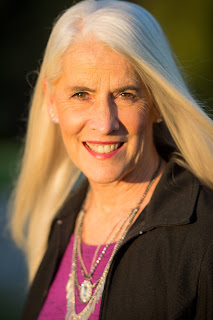 Ever wonder what makes someone tick? Why would a reasonably sane woman traipse through jungles, climb mountain after mountain, and run up to one-hundred miles at a time? Good question.

She really isn't that strange. She is a long-time wife and the mother of two grown boys. She is a house cleaner and dust-bunny gatherer, grass cutter, grocery getter and chief cook and bottle washer. She works at a lot of things and cries all too easily when it becomes too overwhelming. Sometimes she lays in the dark, her heart aching over concerns. But sometimes she leaps for joy at the new day and the pleasures a noisy dinner with family can bring.  She really is very normal--if you don't count the running thing.

Ever since she was a small child, Rebekah knew no boundaries. Few ran faster  or jumped higher. She was always on the go while trying to balance school, sports, and church activities. It was that way through high school, college, and beyond. But it was not the ordinary that called to her; it was the extraordinary. Whether it be in the chilly environment of a cardiac surgery suite or serving her profession on a national basis, Rebekah thrived on what few dared to undertake. But it did not stop there.

Years later, Rebekah stepped to a starting line and stopped fifty miles later. She never looked back. Runs over mountains,  across valleys, and through rushing rivers have taken her on many an adventure. Races have been won, records set. It has been eventful and rewarding. . . but not without difficulty.

Rebekah is the first to admit that the road has been long and winding. Potholes of  fear have threatened to undo and storms have nearly washed out that road. Nevertheless, God has been faithful to protect, encourage, and yes, even chasten, when necessary. Come along beside as her journey continues. Hear her story and learn how you can move from the ordinary to the extraordinary. It's all about your perspective!

Rebekah is married to Gary and lives in Bedford, Virginia. They have two grown sons, Caleb and Seth, who were raised in the shadow of the Blue Ridge Mountains. After spending nearly 25 years working as a cardiovascular perfusionist in the cardiac surgery arena, she now serves as a Career Coach at Liberty University where she coaches Health Science students and is tasked with developing Professional Development offerings for faculty, staff, alumni, business leaders, and other outside organizations. Previously, she served as an athletic chaplain at Liberty University, working with the Fellowship of Christian Athletes. She continues to run long distances, write blog posts and other resources, and has a number of books to her credit.