With a radiant soul

I didn't get much sleep last night.

I was enjoying a quiet evening in my room. It was the calm before 150 girls would storm the Blue Ridge Assembly property for Girls Black Mountain Sports Camp. I sat propped up in bed, thin mint Oreos by my side (which I must say are fabulous), computer screen glowing with various race-link tabs set to follow the progress of runners at the Western States 100 Mile Endurance Run. Life was good living vicariously through the internet connection. When a lull in reporting occurred, I decided to check in with my dear mother. I cheerfully greeted her when she answered the phone. Her response was anything but. It was, well, dull, nearly silent.

"I don't feel good, Rebekah. I don't know what to do." Her voice was wistful and faltering, perhaps even fearful. I could tell she was in a bad way. Attentive to her concerns, I finally convinced her to reach out to the retirement community's on-call nurse.

"Now, Mother, once she comes to make the assessment, have her call me." Agreed. Within the half hour, my phone jingled awake. It was the nurse.

"Your mother is very anxious. The EMTs are here and will be taking her to the hospital to get checked out."

Mother was suffering more than usual. At 88, she was trying to be a trooper--like always. But she's getting tired. Her shoulder offers nothing but pain and swelling, she feels weak and wobbly when walking, and all her get up and go has got up and gone.

These events precipitated calls to my brothers, one of whom made the short trip to the hospital given he is the only sibling living in the area. Several hours and many texts transmitted into the wee hours brought the news of a GI bleed, resulting anemia, a UTI, and decreased renal function. Still, they released her to David who carried her home and lovingly tucked her in for the night.

Today Mother still sounds tired but better. I doubt any real physiologic improvement magically occurred overnight. So what changed? Though still exhausted from the ordeal, maybe she has a better perspective on her status. Perhaps she has viewed her condition as inevitable; the normal course of events for someone completing nearly nine decades of life. Maybe she has figured out that suffering is better tolerated when you can see beyond the moment. Perhaps she knows, as the old hymn states, "it will be worth it all when we see Jesus." She is facing the difficulties with grace and peace. 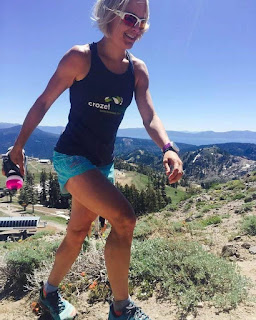 But let's switch gears for a minute. The race I had been following all day was still going on. I used down time between medical status checks to see where a certain female given bib number 29 was on the course. Bethany Patterson, a 37-year old friend with three kids had earned a coveted spot among the list of entrants.

I've know her since she was a baby in the sport of ultrarunning; a talented if not somewhat over-confident and cocky (by her own admission) college student. I had no idea who she was the first time she passed me in a race. However, I absolutely knew I didn't particularly enjoy her perky little self prancing up the hill, leaving me to lumber along with labored breathing. Her career was just starting. Mine, on the other had, was struggling to maintain even distant contact with the awards podium.

A lot has happened in the years since. I've had some good stretches, but mostly years with diminishing return. Bethany rose quickly to ultrarunning prominence, got married, birthed twin boys and a sister, and maintained a successful professional career. Though she never left the racing world, it's just been in the last two years that her trajectory has been stratospheric. This I find fascinating, but in the details of the story, I have newfound respect and admiration.

In an interview  the day before the gun sounded, this slightly built but powerhouse of a runner was interviewed. "I'm a different person than I was." I'll say. If you listen carefully, the cause/effect was her new understanding that she "gets" to do this; that she re-found the joy in the journey. Did this mean she would not suffer in the training? That a hundred miles would be easy? That success was assured? No. And a million times no. It simply meant that because she could see the broader picture, she would commit to do whatever it took to get across the finish line.

Bethany took to the start line having prepared very well. She began running at the sound of the gun knowing suffering on some level was non-negotiable. She was prepared to endure. She agreed beforehand to meet up with "Suffering" along the trail and do battle, but in this case was privileged to introduce him to "Fierce" and her sidekick "Relentless." She posted, "What an absolutely magical day. It exceeded all my hopes and expectations for this race." She pushed her way through the ranks, running down all but six competitors and finishing in a time of 20:40.

Here on the grounds of this camp is a huge rock guarding the founders' graves; Willis and Julia Weatherford. Julie was born in 1889 and died in 1957. I researched her life but found little beyond the epitaph on that rock. ". . .a great sufferer but a radiant soul." Amazing. Most of us have a hard time displaying a "radiant soul" in the best of times. Leaving that kind of legacy meant making the decision to endure with grace over and over and over again. 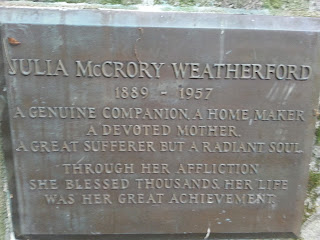 I suspect my Mother, the now-exhausted Bethany, and the late Mrs. Weatherford share something in common: they know (or knew) how to suffer well. They understand (understood) the importance of perspective. They all learned to allow the suffering to produce something most beautiful and inexplicably wonderful.