It is a curious working of the mind when impending doom is registered in what feels like a nansecond. One minute I was running along on single track trail, and in the next I was flying through the air, outstretched horizontally, much like I image Superman would do it. But my rendition of Superman was short-lived. My mind registered the rock waiting to greet me. I instinctively turned my head to the right and braced for the inevitable impact.

I laid on the ground, head and shoulder sending out rapid-fire distress signals. From the resounding crack of my head hitting the rock, I prepared myself for a bloody mess. My head throbbed, my nose and left eye suggesting a poor outcome if pain was any indicator. Simultaneously, my shoulder screamed out in protest from such a brutal and unexpected encounter with terra firma.

Tears birthed from the combination of frustration and pain welled up. Glancing back down the trail, I saw a group of runners approaching. A rush of catecholamines permitted me to rise to my feet. Hands to face, I was shocked to find little blood on my fingers. The runners confirmed there was but scant blood on the side of my nose. As I had no recourse but to follow them up the mountain, I felt my forehead swelling, head throbbing and legs turn rubbery as my brain tried to communicate with them. I did not notice the blood seeping through the tape on my knee (which, incidentally, later won me the prestigious Best Blood Award).

Just four miles into the 35-mile 20th running of the Promise Land 50K++, the fall seemed only to exacerbate my pent-up frustrations. "What next?!?! Heart issues. Iron deficiency. Wonkly, painful knees. Old and getting slower by the day. Passed out on the floor 21 hours after a Covid vaccine last week and feeling weak and unmotivated all this week. I'm just a good for nothing bag of bones! This is ridiculous. I'm done with this. I hate this.  I have been racing through four decades of my like. Why am I even still trying? This is stupid!"

As I moved forward along the course, I thought back to a post by Susan Donnelly, a woman who has completed more than 100 100-mile races. She wrote of a hard fall in a race, one that could have been race ending. But she did not allow it to be. She got up, dealt with the new reality from the impact, and continued on. "Find a way," I told myself. "Just find a way."

I kept moving as my headache kept growing. As the swelling around my eye and over my eyebrow made my vision fuzzy, the conversation between me, myself, and I continued. I tried hard to be positive but was amazed at how many people passed me. I spoke to no one save a few words here and there. I needed to save every thought to counter an inner conversation to quit at the 12-mile Sunset Meadows aid station. Who could blame me since I was likely concussed, feeling wobbly and off-kilter? But no, I must find a way. I must find my why.

My why and my way were wrapped up in a little girl named Addyson. She is my six-year old granddaughter who would be waiting for me at the finish. In fact, it was planned to have her run in with me. Before the race, she told me their class at school was learning about perseverance: to keep going when it gets hard. To not quit." So, how could I quit now? What kind of example would that set? She would be so disappointed. I had to get to that aid station and start down the long descent on the "Dark Side" of the course. There would be little opportunity for me to bag the race and be transported out. Forcing myself onto the Dark Side would protect my wimpy self from making a bad decision that I would surely regret in the aftermath.

And so I kept making progress. I was tentative, very tentative. The rocks seemed to have multiplied compared to earlier years when I would run with wild abandon, not considering the "what if" consequences of a misplaced step or toe catch on a rock. I continuously blinked to clear the vision in my left eye. When I did have clear trail or gravel road to run, my legs did not protest loudly. It gave me a sense of accomplishment to move steadily. That was surprising given the limited number of quad-pounding long runs in the recent past. Still, it was not uncommon for runners to come from behind and pass me. I don't actually recall passing anyone back. That was depressing.

The night before the race, I took refuge in the back of our camo-clad, license-plated "HUNTNJEP. It is tradition that hundreds camp in the open field to make the 5:30 AM start easier to make. I was exhausted from work, eyes strained, and not feeling sociable. Even before darkness settled in, I eased into my sleeping bag, contacts out, glasses on, and picked up where I left off. "Out and Back: A Runner's Story of Survival Against all Odds" is the true story of Hillary Allen. Allen is a world-class mountain skyrunner who catapulted off a knife edge during a race, breaking tens of bones but miraculously surviving. However, the road back to running and racing was miraculous as well. Her words came to mind each time I saw the back of another runner in front of me.

You are more than a result. You are enough, just as you are.

I desperately needed that reminder. Did it matter to anyone but me that I am slow? Do people have less respect for me when bested by so many, including other sexagenarian woman? Is it enough that I entered the fray and continued to put one foot in front of the other? I intellectually knew the truth in her statements. It was now imperative that I internalize them if I was to cross the finish line content rather than angry and embarrassed.

Despite being passed by so many, my fear of missing a cutoff and being pulled from the race was laid to rest with about fifteen miles to go. My time would not be impressive, but I would finish within the allotted time. Or at least, that is what my muddled brain calculated. My focus needed to be on covering the distance despite the ever-worsening disconnect between my brain and my body. My kinesthetic sense was being put to the test. Stumbling was common place. And with the last several hundred yards of rocky, crappy trail, I again found myself sprawled out, half on the trail and half off. My bloody knee ripped open again, palms scraped and ring finger jammed. All I wanted to do was hit the last three miles of descent on gravel road leading to the finish. It would be safer.

It was starting to rain as I ran the road, drawing closer to the finish. The thought of seeing Addyson and completing my journey kept my pace steady howbeit conservative. There was no reason to take chances at this point and under these circumstances. A finish would be a finish in anyone's books.

And there she was. Addyson, cloaked in a fuzzy white sweatshirt and black sweatpants was waiting for me a half-mile from the finish. She fell in by my side, jumping and swirling as much as her effortless forward running. Approaching the finish, race director, David Horton, announced our approach over the loudspeaker. Addy responded to the cheers of the many lining the finish shoot with a wave to the adoring crowd. I smiled, thankful to share the moment, thankful to have persevered and set an example for the young one--and myself.

Excuses: Is there a lion lurking outside your door? 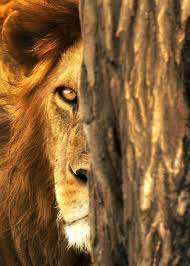