It was a duet of years ago when my 5th book hit the market. When the first wave of books hit the doorstep, I had that same giddy feeling that the arrival of other titles produced deep in my soul. Now, nearing summer's end, one new case of new books arrived in early July, a precursor to a final box that will reveal the product of my recent writing efforts.

It's not uncommon to entertain questions about why I write. I never offer the answer that it is because the royalties substantially increase the status of my retirements funds--because that would be an untruth. Besides, I give away a lot of books. Do I tell the inquisitor that I write because it ups my name recognition and popularity? Hardly. That's not true either. So why? Why do I put in so much effort to put electronic pen to paper, agonizing over each word, losing sleep over how the reader will interpret my words, and fixating on where and when to place commas around the words and and but? 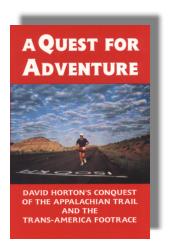 I guess an honest answer would be similar to my response to why I run. Because I can. So yes, I write because I can. I do not write perfectly. Never have. Never will. But I write to let the alphabet-soup of letters swirling around in my head congregate into words, phrases, sentences, and paragraphs. The process requires starting from a vague impression which evolves into a developed, mature compilation of thoughts. At least I hope so. 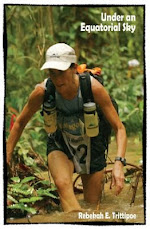 Quest for Adventure, the first title spawned from my admiration of ultra-guru, David Horton. It's two books in one, the first half chronicling his then fastest known time completing the Appalachian Trail. The second half was the story of his California to New York crossing as a competitor in the Trans-America Footrace. 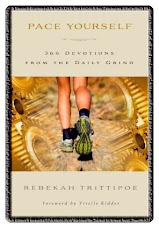 As part of a deal for me to compete in the 250K race through the Brazilian jungle, Under an Equatorial Sky describes the ups and down of the seven-day self-sufficient race. At one point when heat exhaustion made it impossible for me to eat or drink anything for a 48-hour period, the thought of dropping out lost to the realization that the book I agreed to write would really suck if my race ended early. I persevered and ended up second only to my South African friend.

Going into 2008, I had the bright idea to write a story every day, focusing on how the ordinary events of the day taught me spiritual lessons. It was a lengthy process to fund a publisher, but the effort paid off. Pace Yourself: 366 Stories from the Daily Grind was released in 2010.

Then came Best Season Yet: 12 Weeks to Train. I was coaching at the time and wanted to have a way to keep all my athletes on the same page. After all, any sport is much more than performing the X's and O's. There are two editions; one for coaches and one for the athlete. I used this book with my teams as well as college teams, and was also able to share it with many other coaches.

Creative Coaching Across 3 Dimensions resulted from my own interest in using activity to teach principle when working with collegiate teams. Publishing in conjunction with the "3D Institute," it was a perfect fit for both parties. It has become a popular resource for coaches on every level who desire to become transformational coaches.

Writing Pace Yourself  was one of the hardest things I had ever done. Hence, I am not sure why I thought it would be a good idea to do it again in 2020. What a year to write! Still, The EveryDay: 366 Real Stories for Real People became my year-
long project. With traditional publishing avenues becoming harder and harder to penetrate, "Twisted Trails Publishing" was birthed. The book hit the online bookshelves in July 2021.

To round out the current list of titles, Conversations for Coaches: Apply Principle to Practice" was released days ago to meet the August 1 deadline. This work resulted from a 15-week walk through the book of Proverbs I developed for a group of college coaches. The discussion-heavy study was so well-received that it made sense to convert it to book form.

For those of you who have supported my writing, thank you from the bottom of my pea-pick'n heart. And for those who not yet joined the crowd, I want to welcome you to the wonderful world of the written word.